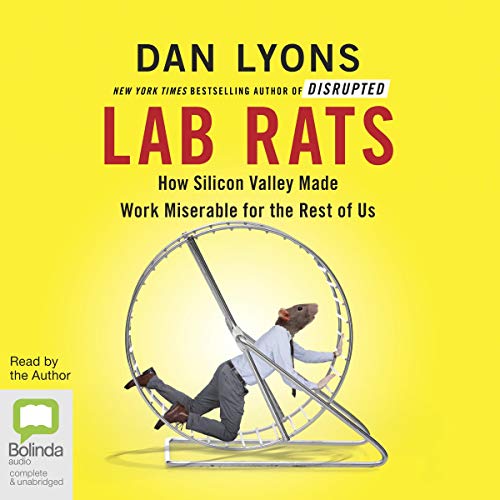 A hilarious and terrifying exposé of the brave new world of work, explaining why it has all gone wrong and how we can regain our dignity.

If any of the above sound familiar, welcome to the modern economy.

In this hilarious but deadly serious audiobook, best-selling author Dan Lyons looks at how the world of work has slowly morphed from one of unions and steady career progression to a dystopia made of bean bags and unpaid internships. And that's the 'good' jobs....

With the same wit that made Disrupted an international best seller, Lyons shows how the hypocrisy of Silicon Valley has now been exported globally to a job near you. Even low-grade employees are now expected to view their jobs with a cult-like fervour, despite diminishing prospects of promotion. From the gig economy to the new digital oligarchs, Lyons deliciously roasts the new work climate while asking what can be done to recoup some sanity and dignity for the expanding class of middle-class serfs.

What listeners say about Lab Rats

Dispels the myth of Silicon Valley

This is an important book in terms of dispelling the myth of Silicon Valley. The key message regarding the importance and benefits of treating workers well will hopefully find some converts! It's also important in terms of revealing the dangerous direction Capitalism has taken more generally, and how this isn't actually necessary, and only serves to satisfy the greed of a small percentage of people.

I see this every day in the conversations I have with people searching for meaningful purpose in new careers. Dan's romp across the problems and issues is a call to arms and a health check for any business owner today to reconnect to their humans whose passions and emotions drive their business - and park their "drive for " in the graveyard of dead company egos alongside the PE and VCs that took them there.

An interesting analysis of the infamous "new ways of working" being forcibly imposed on us. Simultaneously terrifying and hilarious, there are undoubtedly some serious flaws in the system and as someone working in an organisation determined to "go Agile" come hell or high water, I think senior leaders would all benefit from this book and it's lessons.