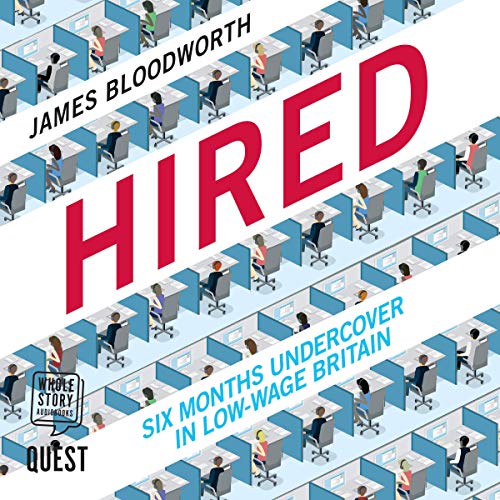 By: James Bloodworth
Narrated by: Alister Austin
Try for £0.00

From the Orwellian reach of an Amazon warehouse to the time trials of a council care worker and the grim reality behind the glossy Uber app, Hired is a clear-eyed analysis of a divided nation and a riveting dispatch from the very front line of low-wage Britain.

We all define ourselves by our profession. But what if our job was demeaning, poorly paid, and tedious? Cracking open Britain's divisions, journalist James Bloodworth spends six months living and working across Britain, taking on the country's most gruelling jobs.

He lives on the meagre proceeds and discovers the anxieties and hopes of those he encounters, including working-class British, young students striving to make ends meet and Eastern European immigrants.

From the Staffordshire Amazon warehouse to the taxicabs of Uber, Bloodworth narrates how traditional working-class communities have been decimated by the move to soulless service jobs with no security, advancement or satisfaction. This is a gripping examination of Brexit Britain, a divided nation which needs to understand the true reality of how other people live and work before it can heal.

"A very discomforting book, no matter what your politics might be...very good." (Sunday Times)

What listeners say about Hired

A Wigan Pier for the 21st Century

On the whole I found this an engaging and interesting book.

As with Orwell, the author sets out on a quest to find out more about the people who take these sorts of jobs on and also the lives they lead, places they live and conditions they live under.

Subject wise I found it interesting and in some cases eye opening, but I really did feel it was let down by the narration.

The reader just sounded totally uninterested and put little feeling or passion into relaying the story. When narrating quotes, it was so monotone it became hard to listen to as he tried to recite the quotes of an South Wales miners sounding more like an ersatz William Hague!


Done with a new voice over, I would recommend this book.

This is an interesting book but could do with a new narrator. The current narration sounds too much like the automatically generated computer-generated narration you get on your pc. Though I thought the book was interesting and purchased to read myself.

You know that robot monotone voice you sometimes get on you tube, well this is the guy that started the trend.

With this guy reading the story I’ve no idea when one sentence ends and another starts, completely spoilt the book

Author made me really think about the UK I live in now. I live in London, I had no idea things were this bad outside of London. in London we have our problems. I enjoyed listen to other parts of UK like Blackpool, Rugley, and South Wales.

Author mentions big companies like Amazon and Uber which brought here innovations and employment but to what cost?

Great book to listen too.

We are all familiar with new features of the economic landscape such as Zero Hours Contracts and the Gig Economy, but few people fully appreciate the reality of low wage Britain.
As the subtitle explains, Bloodworth goes undercover roughing it at low wage jobs in Britain, including an Amazon warehouse, a call center, care homes in Blackpool and Uber Drivers in London.
As someone who has experienced the application of Frederick Taylor's Scientific management, the atomisation of Labour and the nature of agency work, it does not surprise this reader to learn that working class life in Britain has become worse.
As inequality has worsened and the sharp edges of capitalism have become that much sharper, Hired joins a growing body of literature that calls for a re-evaluation of the nature of class in Britain today, or rather, a call for class to no longer be ignored.
Among this body of literature, Hired is perhaps the most penetrating in its insight into working life. While it may be heavy in details, it never at any point becomes dull, maintaining a lively pace and evoking emotions until the end.
Bloodworth is modest and doesn't prescribe any policies, but does end with a call to action for a collective consciousness to try to find solutions to the dire realities contained within this book.

Destruction of the civil state

A revealing and depressing journey through the world of the low paid. The never ending search for a 'bargain' and the drive by corporations to maximise profits, aided by a complicit government, is stripping away hard fought for workers rights. Shall certainly limit what I buy from Amazon. Does not give you much hope for the future.

fascinating, but narration not great

this is a fascinating look into the working practices of some of the biggest employers in the country. I have to say though, the narrator is very flat, and it listens like a very long news item. He also cannot read out dialogue and sounds a bit like when you text a landline.

Not quite what it promises

The first and last parts (Amazon and Uber) are interesting. The other two parts (homecare and call centre) ramble on about other things, such as the history of coalmines and working class in general, and hardly mention the jobs he was supposedly working. I assume the author didn't really have enough material for a full book, so he added some fairly irrelevant stuff to make it longer. In short, the parts where the author actually talks about "working undercover" are interesting, while the rest of it is tedious to listen. While I'd find listening to a former coal miner interesting and their stories deserve to be heard, it was not what I picked this book up for. I also think the author only concentrated on the negatives of each job - in particular the call centre job did not sound horrible, but since he didn't need to stay working there, he was able to write any offered "perks" off as silly and argue that they should pay people more instead. He also earned what Uber told him he would, but then complained that he spent a lot of it on expenses such as renting a car and paying someone to clean it. All in all it was a fairly shallow book. Some of it was interesting, a lot of it wasn't. The narrator I thought did okay, he didn't have a lot to work with.