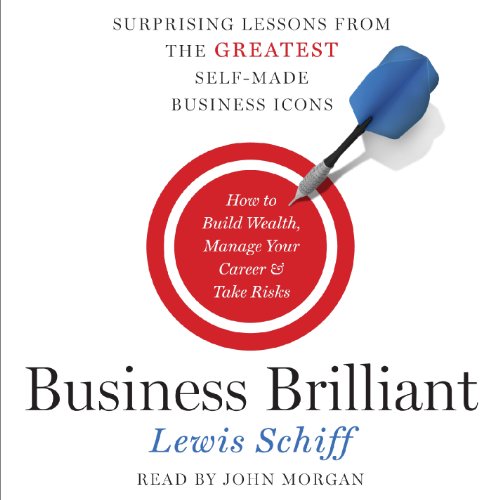 Ask a member of the middle class what it takes to become wealthy, and she'll tell you it takes a bold new idea. Tell that to a self-made millionaire, and he'll vehemently disagree. What explains the difference in mind-set between the self-made wealthy and the rest of us? It's not what you think, as journalist and entrepreneur Lewis Schiff convincingly illustrates through groundbreaking research and compelling storytelling.

For decades, the middle class has believed that the road to success meant working hard and playing by rules passed down from previous generations. But as the 2008 economic crisis has made clear, the old rules no longer apply. While household net worth has declined for most, self-made business leaders - entrepreneurially minded individuals born into the middle class who have accumulated significant wealth - have prospered. What makes these have-mores financially successful while the rest of us have never felt more uncertain about our professional and financial futures?

In Business Brilliant, Lewis Schiff reveals the eye-opening findings from a national survey of middle-class workers and self-made millionaires, offering practical guidance to show the rest of us what America's self-made rich already know. Through his research, he holds a mirror to our most commonly held beliefs about success and then reveals the truth about how wealth is really created by surveying the truly wealthy. In doing so, he explodes the conventional wisdom and identifies the distinct principles practiced by individuals who may or may not be any smarter than the rest of the population but seem to understand instinctively how money is made. They don't employ business-as-usual practices; they adopt a "Business Brilliant" mind-set. The book illustrates how these self-made millionaires choose their careers, negotiate to win, and leverage social networks to accumulate their wealth.

Schiff argues that it is the synergy behind seven uncommon practices, not serendipity or luck, that produces success. He offers a practical four-step program anyone can follow to position themselves to succeed more often and a roadmap to compare your own Business Brilliance to the executives and entrepreneurs who have successfully navigated our rapidly changing economy. While Business Brilliant doesn't promise to make you rich, it can help you achieve better results in your career and accumulate wealth faster.

This book takes you on a journey through our misconceptions of the middle class mind set, and gets you thinking like a millionaire. Prepare to be surprised.

Starts slow, but PLEASE read it through!

This is one of the very best business books I've read ( and I read quite a few).
It starts a bit slow (though still interesting), but in the last chapter, it all comes together into possibly the best business advice you'll ever read.

The lessons are very different to what I expected

All through the book the author punctuates the points with a bit of research they have conducted about the difference between what the middle class think and what self-made millionaires think. This is interesting because I found myself agreeing withe the middle class view (which I am) but I understand I am wrong about many things. The book gently points out you are mistaken and teaches you why and then what to do about it.

A brilliant book with great insight into business

If you could sum up Business Brilliant in three words, what would they be?

Learn what you should be doing and why you haven't been doing it.

What made the experience of listening to Business Brilliant the most enjoyable?

These ideas were being consistently backed up with statistical data and further the ideas were demonstrably valuable. I learned things, like the dyslexic and handicapped aspects, reminders of how failure is a part of the game, the behind the scenes stories of Steve Jobs, Bill Gates, Charles Schwab, Richard Branson, Warren Buffett. In the end I felt like I had been given a valuable insider's look, another less popularized world view and a removal of some of the rose colored blinders often provided by a sensationalism seeking reportage.
At one point I felt that much of this information was so valuable that it would far exceed any price that one would have to pay for the book. I think it is beyond an excellent college course and that every student should be exposed to this information prior to entering the job market. There was much good, much much good information on negotiating and overviews. I considered the book important and well done.

There were many characters, the bits of information, the presentation... Charles Schwab dyslexic, unable to read, having his subordinates explain the documents was interesting. I did like that thing about how what could appear to be a handicap, actually became a plus by people seeking additional help and guidance... there were many good things!

Which character – as performed by John Morgan – was your favorite?

This wasn't a fictional work, and if it were I don't really care for the heavy intrusion of "characters" by a reader who over acts. John Morgan's presentation of this book was just plain solid and proper.

Sit back college students, relax and enjoy, and we will have a valuable discussion afterwards and I think the students in this class will have an extreme edge in the direction of a pursuit of their goals and a prosperous future. This author is giving you valuable information and good short cuts, take heed.

Ah, toward the end, the energy waned and the ideas became problematical. At one point I acknowledged that some of the latter advice being given contrasted to the very paths many of the successful people whose methods had earlier been described could not and would not have been chosen. It fell off, but that in no way made the earlier information less valuable. Can't do an analysis of financial spreadsheets Richard Branson, or Charles Schwab?- well then you certainly must- in order to be successful - according to the latter part but, whoops! You are successful?! So at the tail end the book seemed to break that track, neglected to actually hear it's own initial presentation- but like I say that can all be forgiven. It was good and I highly recommend it to others.

What's different between you & riches

Do you want to know what? This book tells you what. Learning to think different. Love it.

Good information, a but slow moving and redundant, but perhaps by design. A few key points that make it worth the time and effort.

I will induct this book into my business book hall of fame, meaning I will come back to it time and time again...knowing I will get a new lesson each time.

Well worth your time.

If you're seeking insight into finance, careers, and life, this audio book is worth your time. The author provides a fairly realistic critical analysis of the typically trumpeted wisdom in these areas. I highly recommend it unless you consider yourself very mature and wise in these areas.

One of the best books in business with facts m, stories and real life applications.

I can't believe I waited so long to listen to this book. I've already started reformulating my approach as I build my company thanks to he insights and tactics in this book.