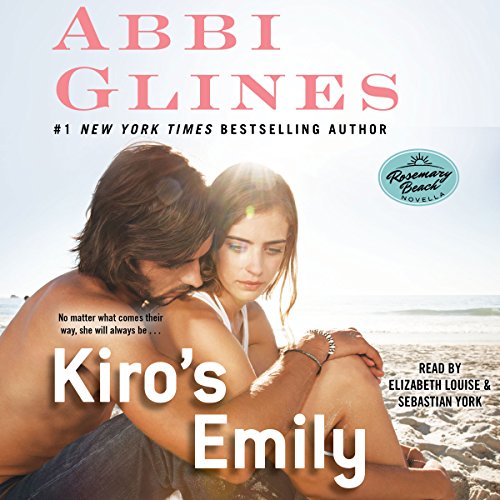 The year is 1992, and no one on the rock music scene is hotter than Kiro Manning, the lead singer of Slacker Demon. With a multi-platinum record, total ownership of the Billboard charts, sold-out concerts, and sinful amounts of money, Kiro can have anything - and anyone - he wants.

So when a dark-haired, conservative beauty rebuffs him at a concert after-party, his first thought is, "Who the hell does she think she is?" His second thought: "How do I make her mine?" Kiro has always loved a good challenge, but not every girl wants to get involved with a rock god. Especially this girl.

He let her go that night, but he never forgot her. And when they met again, he vowed not to give up again so easily.

As the world worshipped Kiro, he came to worship the girl, who became everything he never knew he needed. The only girl he would ever love. His Emily.

From number one New York Times best-selling author Abbi Glines comes a heart-wrenching novella in the Rosemary Beach series about the star-crossed romance between Kiro and Emily, first introduced in Take a Chance. This is Abbi's holiday gift to the devoted fans of the series.

This story was so sweet, so beautiful and so HEARTBREAKING.

Even though I've read the series and know the ending to Kiro and Emily’s story, it’s such a great listen thanks to Sebastian York and Elizabeth Louise who did a great job bringing their story to live.

I recommend it to anyone who loves Abbi’s Rosemary Beach series.

this is a awesomely sad book and I hope and pray that there story does not end here and rhat there is a happy ever after......

An enjoyable addition to the Rosemary Beach series

I adore Abbi Glines work but I didn't have much intention in reading this novella because well, I already know how it ends. But when I saw Sebastian York and Elizabeth Louise were narrating the audiobook, this sold me. They did a great job as usual. The story was okay - enjoyable. Not my favourite but I'm glad I listened to it. In all the narrators sold this for me!

Maybe I expected too much. Willfully dumb is never cute, and douchebaggery is never hot. Even for a rock star. Meh

This story touched me like no other! I don't know how Abbi Glines can do this especially with a novella that's only a little over 2 hours long! I actually teared at the end. I read one of the reviews who said that even Sabastian York couldn't pull off how Kiro was...well shame on her because not only was Sabastian amazing but Kiro's character was wonderful as well. His devotion to Emily was truly a wonderful experience. I would want that experience from someone! This story was so heart warming and Emily was amazing with how she pulled Kiro together and made him feel worthy and loved. And how she brought Mase into their lives! But above all....the wonderful LOVE that Kiro and Emily shared with each other!!

Wonderful ending. After reading the books in this series I was worried how this one would end. Kiro's love for Emily was beautiful to read.

I liked the beginning of the book, but hate the end. I thought the book skipped to much and I did not like that there was not a happy ending.

Good listen! Always love a good Abbi Glines story! I have read most of the Rosemary Beach series and have enjoyed each one.

l could not put it down.

Sebastian York has the voice to keep a good story great. It's nice to wish that there is an Emily out there to love little angel when their own parent didn't see the gift they had.

My first time reading from this author and I loved this book , I wanted more the narrator awesome wishing more

excellent novella, and nice to learn about Kiro and love for Emily and how it for started. excellent narratives and well worth the time and cost.

Perfect Story for the fans, Love it 5 stars

This is a beautiful story even though we know that for Kiro and Emily their HEA did not last forever, but that is what gives this story credibility, it’s so realistic. Life is not always perfect but it does often have some very beautiful elements. Kiro had a very hard start on life and this insight lets you know why he is the way he is, not perfect just a man with flaws, but with some very redeeming qualities. He loved Emily with all of his heart and that is what Emily wanted really, to be loved and treasured. Even after her accident and she was no longer perfect, in Kiro’s eyes she was still perfect and he continued to love her. This brought tears to my eyes. This may be a novella but it carries a big impact. If you are a fan or just starting to read these books, you have got to get this novella, I was not disappointed. The narration of the story was great as always and the Abbi Glines is a talented author. This was well worth the money.