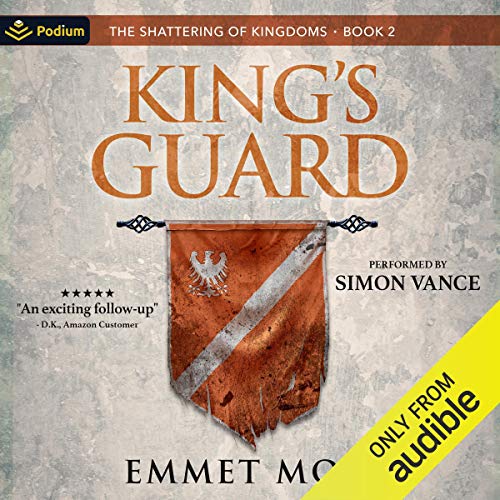 The Mercenary Code has been broken, and a new Protectorate Empire has arisen.

In league with renegade mages known as the Fallen, the Protectorate will stop at nothing to expand its reach and unify the factions of Old Caledun by any means necessary. The few who escaped the coup are now in a tenuous struggle against the growing influence of this corrupt new Order.

Mercenary companies loyal to the old ways race to defend one of the last bastions of freedom in the South. In the capable hands of its ardent commander, one city prepares for the decisive battle that will shape the future of Kal Maran. New allies have joined the cause, but can they turn the tide?

In the depths of an ancient subterranean library, two unlikely companions continue to explore the mysteries of a long-vanished race. While in the distant Drayen Lands, a foreign noblewoman is thrust to the fore in the midst of an enemy invasion by sea.

And in the North, hope has been rekindled. Surviving the trials of the Wilds and reaching the lands of the Iron Shield, the An'Dari - legendary protector of Kings - has returned. Searching for Caledun’s true heir, his memories hold the key to absolving the sins of the past.

What listeners say about King's Guard

Unlike Book 1, this books gets a bat on and there is no stopping the action that follows. Action is both fast and furious but, again, I found a list of the characters involved would have been helpful to separate characters out when there are so many diverse ones.

It takes you away in a magical mist and leaves you in a world that echoes our own.
Well written and strong in character.
Utterly Consuming.

After years of searching for more well written fantasy, this series has done well to fill my needs.

Good! I want to know what happens!!

This is a good book. I very much enjoyed it. Well written and performed. I don’t want to wait to read the next one.

Have made it through the first two books of this series and have to say that, for military buffs, this series must be great. However, I am not a military buff and found the excruciating detail of the non-stop battles to be so much filler. Since well over half of both books consists of such filler, I’ll have to pass on any forthcoming volumes.

My only complaint is it can be a bit hard to follow (probably bc I’m listening as opposed to reading). But all in all I’m hooked so far. It’s not a stupid teen romance like SO many books within this genre. There’s grit. There’s character building, and all in all I’m really enjoying so far.

Not as good as the first book

Predictable plot, stiff dialog, and flat characters without any development make with a fast-forwardable audiobook.

There were times when the detail was a little thick (for my mind) and the parade of battles became a bit tedious and exhausting (like battles are). It would have been better to seed in more upbeat, inspirational, and especially humorous scenes as rests/relief. BUT, I am completely amazed at the mind of the writer and the skills of the narrator. This puts many of the best to the test. I have listened to hundreds of hours of audio in my travels and this is in the top five.

I do believe the author hates all of the characters more than I do. I'm starting to wish somebody would shoot me with an arrow too.

If you love excitement and danger get this!

super story! very complex but also very organized... a must read for all fantasy fans!

I really enjoyed book 1. I read a review that stated book 2 changes greatly with more military engagement and battle. That is precisely correct. This is a very different book. I didn’t enjoy it as much, but that statement kinda detracts from how good this story, writing and narrating are. It’s incredibly enjoyable and I highly recommend it. Again, one of the things I enjoy most about this book is that the magic isn’t overpowering. Very well done.

This series is destined to be a classic within the fantasy category, masterfully written and the narrated.