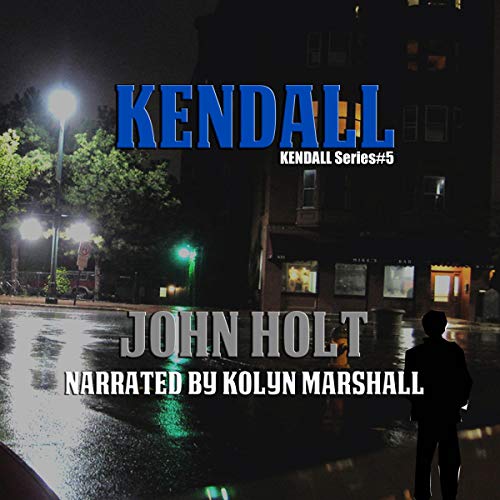 By: John Holt
Narrated by: Kolyn Marshall
Try for £0.00

Tom Kendall had been with the 32nd Precinct, New York Police Department, for just under 10 years. But now he wanted a change. Now he wanted to start his own private detective agency.

He had grand ideas. He wasn’t interested in just any old case. Oh no, he would handle only the big-time cases, the expensive ones. He would be able to take his pick, the ones that he wanted, where the stakes were high and so were the rewards. He knew exactly the kind of case that he wanted.

Anything else would not do, and it would just be turned down flat.

Although a standalone novel, this is the fifth Tom Kendall novel.

What listeners say about Kendall

Now we know how Kendall became a private detective.
John Holt the author is excellent in creating believable personalities, just like detective Kendall a lazy one but somehow always gets to the truth and never gets paid because of it.
As usual the choosing of Kolyn Marshall was a good one, he is a great narrator perfect voice for each character.

I enjoyed every audiobook from the author John Holt that’s for sure so it’s absolutely no problem for me to recommend his books, I do believe that all will also enjoy them as much as I did.


In exchange for an honest review I’ve received this audiobook.

Oh my gosh, I’ve listened to these out of order, but it really doesn’t matter too much. The stories can be listened to independently.
Molly and Kendall form a partnership which reminds me of chalk and cheese. He is old fashioned, she is modern fresh faced. They work great together, planting the seeds for great break throughout. Will be seeking out more from this author

I loved the narrator
The main characters have great chemistry.
You will find murder, phone hacking and blackmail, the story is plot and the other characters in this brilliant fun is very well developed..

Kendall, the policeman turned private eye and his secretary business partner Mo!ly : at last we discover how they came to come together because, quirkily, although book five in the series, this book tells us how it all began.
The detective who doesn't believe in coincidences, and doesn't seen to believe in work much, either, but is driven by the marvellous Molly who feeds him biscuits and ideas which he assumed are his own. This is his first case as a private detective, long awaited because previously he's been rather lacking in clients. And now he has two, a wife with a missing husband - and, seperately, the husband himself. Plus his old police buddies from New York want him to keep an eye on two low grade criminal brothers who have just moved into his area. With double the fees he really needs the money. Now he just has to solve the crime.
Narrator, Kolyn Marshall, does a fine job catching the laid back, self internalizing Kendall, already regretting leaving the job with the New York police and wondering if he really needs to lose just a couple of pounds in weight, as well as giving excellent voice to Molly and the other characters , even if his Irish accent leaves a lot to be desired. The meandering investigation is fun as is Kendall's constant mind changes and desire for coffee and biscuits. Great characters, Good story, nice narration - recommended.

I really like this private’s detective. He’s quirky in his inner monologues but capable of being professional as well. I also love the way he is able to look outside the box to solve his cases. Hopefully I will get to listen to more of Kendall in the future.

The Beginnings of Tom Kendall PI

We're introduced to the rambling detective as he leaves his New York police department to embark on a career as a private investigator. His high ideals of only taking major cases soon founders as work fails to materialise. The saving grace soon materialises in the form of Molly, hired as a secretary but is soon appointed as a partner. Kendall is an endearing character who stumbles and rambles along collecting clues and pointers others fail to see. His first case involving a missing person unfolds into a murder mystery with a twist in the tail. Excellent narration gives depth to the listening experience.


Kendall the detective. . This Detective is pure gold. I’ll certainly be looking out for more books by this author. He is not the usual pain in the brass we’ve all learned to live with for the past few years

Kendall (Kendall Book 5) was a good read by John Holt. Tom Kendall has worked with the New York Police Department’s 32nd Precinct for just under ten years. But he’s looking for a change and decides to start his own Private Detective Agency. He decides he will only handle the big time cases and the expensive ones. This was a great read by the author and I cant wait to read more.

So many times I wanted to ductape Mollie's big mouth shut. I found her pushy, manipulative, and annoying. She micromanaged and bargained up for a job position she had no qualifications for. Grrr... Obviously I didn't like her or her tactics. I enjoyed Kendall and his fly by the seat of your pants methods. lol. Endearing. I enjoyed his perseverance , even as he was wanting the safety of his old job back . I voluntarily listened to a free copy of this and am giving an honest review.

Who done it this time

Caught another great John Holmes mystery , I like the way this book is written, I was kind of put off with the narration but soon my interest was in the story Which was very well written. I recommend this book it’s a good mystery kind of Colombo type but you’ll like it I know I did.

John Holt old fashion detective story tell how Kendall setup his private eye business. I feel that this book should’ve been the first book in the series but for some reason it is book5. Probably due to the order they was written in.

I love Molly character. I can just picture her guiding Kendall in his everyday life.

There is no corse Language in it, or sex scenes. Although there is some violence it does not go into great details. And because of this I feel that this story could be read by young adults as well.

This is John third book I have read and I have enjoyed it them all.

Narrator Kolyn Marshall again does a good job bringing the characters alive with their own individual voices.

This audiobook was provided by the author, narrator, or publisher free of charge for a honest, unbiased review.

I never know how to feel about prequels. I mean I always wonder why an author doesn’t just start off with this as the first book? It would make sense. I rather fathom they pick up quirks along the way and then the author must say, maybe I should go back an explain why he does this behavior. That’s a bit what I thought about this book. I learned much about Kendall in this segment of the series that sheds light on his behaviors, such as he was as lazy a cop as he is a private detective. It also explains why Molly is so pushy. I always wondered why Kendall would put up with so much bossiness from his secretary, and why in the beginning of book one Molly would stick around even though Kendall couldn’t pay her. And then in book 4 when they go on vacation, I was thinking Molly was a bit comfortable going on vacation with the boss’s money. But it makes complete sense if your secretary is your partner. In this book you’ll learn about how the Kendall agency forms and how it almost wasn’t even in existence, about how Molly came to join the agency, and how if it weren’t for Molly, Kendall wouldn’t have made it. There is of course, Kendall’s usual quirky sense of humor, which I love, and Molly’s bossiness. You’ll laugh and shake your head at Kendall and wonder how he could ever solve a crime, and how he practically stumbles into solving each case. But underneath his outward appearance, is a clever man. I love this character, who reminds me so much of Columbo and look forward to each story. The narrator does a good job and gives just the right attitude to Kendall.

The perils of starting your own business

New cases lead Tom Kendall on twists and turns to find the perpetrators.

How it all began

Kendall and his secretary Molly have a solid working relationship in the first four books. Now comes book five titled Kendall to expand and fill in how Kendall started as a P. I. And where Molly comes into the story. Kendall is his usual lazy self but still manages to get the job done, albeit with the capable assistance of the driven Molly.
I really enjoyed this book and learning of the history of Kendall and Molly and how they came to be a great working partnership was a bonus.
The narrator Kolyn Marshall has a great voice, although I do admit that I was sceptical of a new narrator in book 5 but I soon overcame those feelings very quickly.
All in all an enjoyable listen and I would highly recommend this book.
I was given a free credit in return for writing a review for this book.

Kendall: Kendall, Book 5. Kendall isn't a hero who is instantly likeable but he grows on you both him & Molly.
You can read this as a stand alone novel as it recalls the beginnings of Kendall PI.
This is a must read for anyone who liked "Columbo" . John Holt is masterful at this genre.
I was given a free copy of this audiobook at my own request, and voluntarily leave this review.

The story involves a police officer seeking to develop his own private investigator service associated with high profile cases. The plot is suspenseful and held my interest with plenty of unexpected twists and turns. Although associated within a series of books, this particular story is the first that I have listened from this author and found it to serve well as a stand alone. Definitely a gooychoice for mystery and adventure lovers. I received this audio for the purpose of review and opinions and thoughts were my own and unsolicited

This tale is every bit as good as the others in the series. You can bet that all of them are very entertaining.