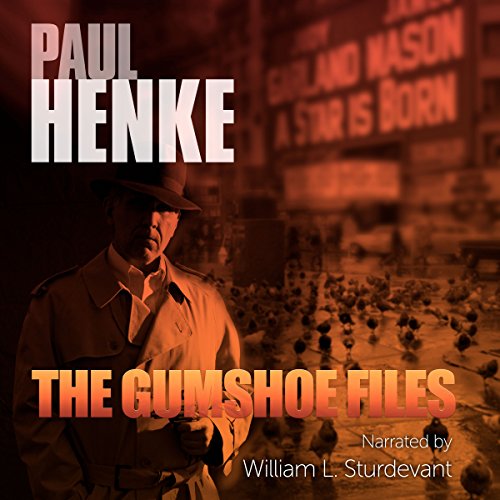 It is 1946, and Frank O'Brian is a gumshoe in New York, in other words a private investigator. Having just qualified as a lawyer when the US entered WWII, he quits to work as a field agent for the Office of Strategic Services in Europe. On returning to New York, he found the notion of returning to the law too tame and hung up his PI shingle. In his first big case, the Vanowen case, he is involved in murder, blackmail, and double dealing. Using his wide range of skills, O’Brian quickly solves the mystery.

Following the high-profile case, O’Brian is able to pick and choose his next case. When a retired general visits him, distraught that his daughter has been kidnapped, O’Brian agrees to take the case. Is General Simpson’s distress an act? Hired to pay the ransom, things spiral out of control for O’Brian, and he realizes he hasn’t been told the truth, and all is not as it seems.

In the third case of this trilogy, the Sandover twins case, one of the twins hires O'Brian to find her missing sister. The girls are actresses, and Frank is dragged into the New York theater world, where it is not all glamour, fame, and riches. Were the twins tipped for the top? Frank knows time is of the essence. With the support and help of his assistant, Zelda, and his new partner, Luis Garcia, a Cuban immigrant and ex-cop, he sets out to find the missing girl.

As with all Henke novels, the twists and turns of these stories continue right up to the end.

What listeners say about The Gumshoe Files

Great stories, well worth a listen

Loved it! Really great captivating stories that made you want to keep listening and not turn it off! Spent most of my holiday listening to it. I would recommend!

These three cases set in the late 1940's are packed with murder, kidnapping, missing persons, arrogance, and greed. The characters are well developed, real, interesting, and very human. Henke does more than track down perpetrators and arrest them. The effect of paradigms on what you look for and what you see, the emergence of the female character in seeking gender equality, and the pursuit of justice are issues explored in these stories. There are lessons to be learned. William Sturdevant is fast becoming one of my narrators of choice. He brings the characters to life (or should I say he gives them a voice).

These 3 stories are not quick, sparse anecdotes, but are developed cases set in post WWII era with great backstories. The narrator has great intonation and kept the character voices recognizable. I love period pieces and the time period was accurately described. I enjoyed this book very much and look forward to more Gumshoe Files!

The story was good. Not quite the typical gumshoe stories. I will check out other stories in the series to see how the characters develop.

I gave this audible book a solid 3 stars. I would have rated it better but as a woman, I was disappointed that he didn't have strong female characters. I would like to try more Paul Henke books as he has had a very interesting life so has lots to offer to the story line. I have also listened to William L Sturdevant before and enjoy his narration. He offers different characters that are believable and kept me engaged.