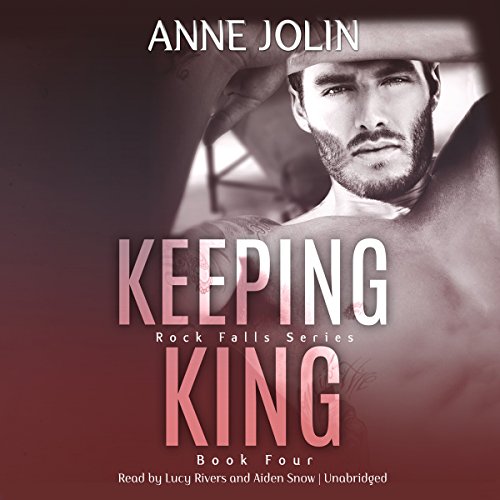 Peyton Callaghan is a fighter, a survivor, and a warrior. When it was kill or be killed, she didn't hesitate. Now she's the only one left standing, haunted by the ghost of a dead man and plagued with the guilt of having taken another person's life. The upheaval of her life to start over in Rock Falls has been shaky at best, her worst nightmares and wildest desires colliding with each other. Terror tortures her nightly, breeding fear inside her dreams. And in every waking moment, she fights against the lust that threatens to drown her.

Jayden King harbors secrets beneath his outward playboy demeanor. The women who warm his bed lay claim to nothing - you can't lay claim to someone who doesn't have a heart. His wit and charm are exquisite means of deflection and distraction from the turmoil roaring inside him. He's hidden in plain sight, a mask of humor keeping the sadness at bay. The only real reflections of his soul are in the artwork he creates, pieces of him muraled on the skin of others. If tattoo artists could have a calling card, the etch of pain and suffering in each design would be his. Because when the lights go out and the women he's satisfied have gone home, he's alone with every fear he refuses to face.

After suffering from a brutal attack at the hands of her roommate's stalker, Peyton is forced to live with the object of her affection. Without intention, she breathes love into his starved heart, and although the mere thought of that terrifies him, Jayden would burn the city down to keep her safe, causalities be damned.

She can have him. She can hold him. But can she keep King? Or is it impossible for Callaghan to keep something that was never really hers to begin with?

What listeners say about Keeping King

Really enjoyed this book. I knew Peyton was going to have an interesting story! I love that she is a strong women and Jayden is a super sexy protective bossy man! This book had excitement, softness, honestly and hot sex! Really enjoying this series and am looking forward to Jackson's story because the end of this book really set us up for the next book!!!

Beware, the book seemed good but

I was in the middle of reading this book, which I seemed to like and now it’s no longer available and I can’t even buy it with my credits. What the heck is that? I’m giving 5 stars because so far I liked it and it’s not the authors fault that audible took it away😡

narration excellent. supporting character's stories complex. not a fun story but definitely come to care about all of them. H, jayden, is a out of control sometimes and possessive, damaged. so sexy, jayden is completely hot, so hot. Aiden is the most amazing narrator ever. lucy does a great job too. as to the story, there is lots of pain and violence here but beauty too. spoilers ahead!! three episodes of intense voilence and death in Peyton's life and one in jayden's. the part of this story that was difficult to take was one person being stalked and attacked, even to attempted murder, by three seperate people/groups. talk about bad luck. it's a bit much. listened through AE but planning to buy it soon

This series continues to be full of romance, suspense and an ensemble cast that makes you feel right at home. This installment features Peyton. She has been the quiet roommate, keeping to herself and silently crushing on Jayden. Her past holds her back, between guilt and shame she has difficulty interacting with others. When circumstances occur beyond her control, Jayden steps in. He too has baggage and has been attracted to Peyton and takes the opportunity to take care of her. The two have incredible chemistry. But the past does not stop interfering with their relationship. We get to see Hannah, Grayson, Beth, Braxton, Lennon, Jamison and Jackson throughout the story which gives the series great continuity and feeling of home. These friends are together through thick and thin. We also get to meet Colt who I think would be a great addition to this group!

Narrated by Lucy Rivers and Aiden Snow, this book could not have had a better performance. These two capture the emotions and fear as well as the passion between Peyton and Jayden keeping you intrigued through the entire book.

Story was interesting. Narrators made the story come alive. They did a really good job. Both are favorite narrators of mine. I am looking to see if this s author has other audible books available as well as kindle.