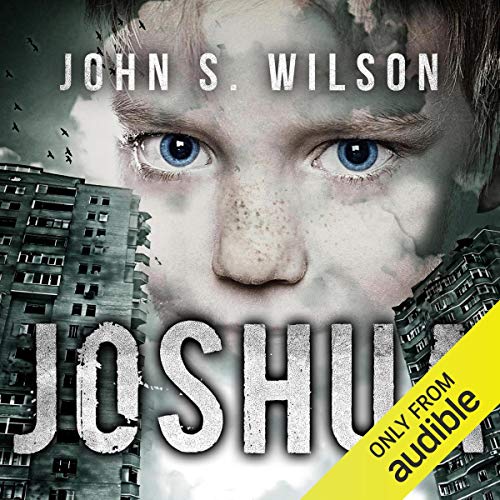 He had to keep moving, that the man instinctively knew. He had to get away, from the rioting, the lawlessness, the killing. Away from the brutal gangs that ruled the highways. Then there was the boy that he found along the way, an orphan with no place to go. He couldn't leave the child behind; that would be murder. Together they had to make their way across the razed landscape of post-collapse America, west to where there was safety, a chance to begin again. If only they survived the journey.

The story doesn't try to hard. It's not larger than life. If feels like it could legitimately take place over the next 5 to 10 years. Everything about the characters and the situations they found themselves in felt completely natural.

The calm/controlled/rational tone of Yen's voice was perfectly matched to the protagonist. And it provided a perfect counterpoint to the turmoil of the plot (the end of society as we know it!). That made it all the more unsettling and eerie. Really nice!

Two of the first three reviewers mentioned the fact that the protagonist is left unnamed. I admit that I found that a bit unusual at first, and wasn't even sure what to make of it. But I personally didn't think any more of it after the first chapter or two. The very first reviewer suggested that a name is critical in making a connection with the protagonist. I don't agree at all. I can (surprisingly often) finish watching a movie, and not be able to tell you the primary character's names, but I most certainly can tell you all about them and their experiences. While that's very uncommon when reading a book, it was the case with this audiobook. And when you think of it, an audiobook is pretty much halfway between a book and a movie.

What did you love best about Joshua?

A typical Armageddon scenario, but with great characters.Definitely makes me fear the "Survivalist" wacko-s more than before...

If you could rename Joshua, what would you call it?

Of all the stories written about the ending of America as we know it, this one is my favorite. The financial downfall is not at all far fetched, as the economy has long been "propped up" falsely . . . and it's indeed a frightening thought what ordinary people might do when faced without food and necessities. What makes this book different than others is the human story of THE MAN and the boy, Joshua. It is captivating. I couldn't stop listening, as they encountered the worst and the best in others. And though in small pockets across America, there was GOOD . . . there was faith . . . and there was hope.

I was completely taken by this story.

If you could sum up Joshua in three words, what would they be?

The Man. Even though he wasn't given a name, and The Man was repeated over and over and over.He's a true to nature kind of guy. Honorable, protective, nurturing, pleasant and caring. The kind of man I aspire to be. Despite the precarious situations he found himself in, "just" about everything he did was done with Joshua's needs in mind.

The Man, the vocals are very well acted. I don't remember any parts that I felt were over dramatized. Very even and consistent.

There is a moment in the story when The Man did put himself before Joshua and tragedy happens. Very sad and heartwarming at the same time.

Try not to be discouraged by the constant referencing of "The Man" it is just a moniker after all.

On the whole, yes. The story itself was quite good. The grammar and syntax were atrocious. There was a lot of repetition and calling the main character, "the man" was quite tiresome.

Could you see Joshua being made into a movie or a TV series? Who should the stars be?

Ayn Rand meets Ted Nugent. If that's your cuppa, then go for it. But not for me, thx.

I am several hours in and try as I might I just cannot continue . This book is poorly written and digesting its content is too much of a strain.
I got bored and felt estranged with the plot and characters early in the book and it just got worse.
Even Jonathan Yen whose narration I usually enjoy couldn’t save the wreckage. I am sorry to say that Stating the obvious and being awkwardly redondant and wordy should not make you a writer.

What disappointed you about Joshua?

Firstly, the narrator was just so boring, I had to really focus to stay with it, the drone would have me fading out. Secondly, never giving "the Man" a name resulted in a lack of care even a dislike of the character - his moral standing was conflicted, he felt bad about stealing but it was OK to shoot people. The writer fleshed out the story in the most uninteresting parts and skimmed over parts that could have been fascinating.

Has Joshua turned you off from other books in this genre?

This is one of my favourite genres, this book is just poorly written

A different reader, one with more inflection in the voice and an ability to inject various levels of build up and excitement.

If you could play editor, what scene or scenes would you have cut from Joshua?

I stopped reading 2 thirds of the way through....twice, ( 1 year apart) so can't say

The idea Christians are the only decent moral holding citizens on the planet is ridiculous, I found the constant god references being shoved down my throat tedious.

A Christian-Liberterian View of the End of Times

Where does Joshua rank among all the audiobooks you’ve listened to so far?

The story was well paced and kept me interested. I did have to overcome the authors not-so-subtle political and religious views. It was an ok enough story. Not the best, not nearly as good as "The Road."

Didn't have a favorite.

It was an ok story. I think it can be rewritten without the political commentary and still have a good affect on the overall tale.

This is not good

I'm confused by this book. "The Man" is a very frustrating character. Yes its annoying that he never gets a name during the story. But what is much more annoying to me is his need to constantly put himself and the child in danger in a post apocalyptic world without good reason. Also the character conflicts himself. A lot. He seems to have strong Christian beliefs but commits some pretty unthinkable acts which just don't make sense. And why the hell does it take them so many years to get to where he is going ? I didn't like this at all. I wish I could unread (listen) to it. Stay clear of this. There's a sequel but I wont be checking it out.