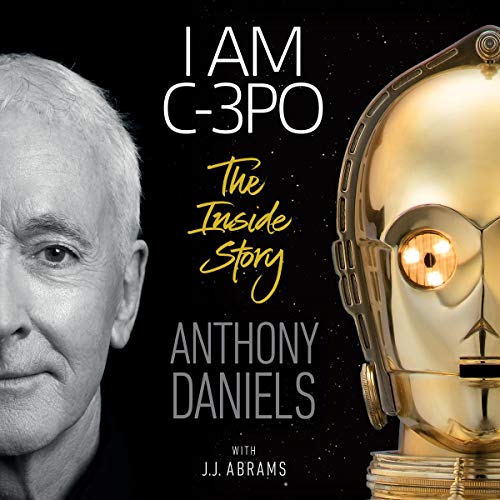 DK Audio presents the audiobook edition of I Am C-3PO: The Inside Story, written and read by Anthony Daniels.

Including a foreword written and read by J.J. Abrams and a selection of music from the Star Wars films, composed by John Williams.

“The odds of me ever writing a book were approximately...Oh, never mind. My golden companion worries about such things - I don’t. I have indeed now written a book - telling my story, in my voice, not his - recognising that our voices and our stories are inextricably intertwined.”

When Star Wars burst on to the big screen in 1977, an unfailingly polite golden droid called C-3PO captured imaginations around the globe. But C-3PO wasn’t an amazing display of animatronics with a unique and unforgettable voice-over.

Inside the metal costume was an actor named Anthony Daniels.

In this deeply personal memoir, Anthony Daniels recounts his experiences of the epic cinematic adventure that has influenced pop culture for more than 40 years. For the very first time, he candidly describes his most intimate memories as the only actor to appear in every Star Wars film - from his first meeting with George Lucas to the final, emotional days on the set of Star Wars: The Rise of Skywalker.

With a foreword by J.J. Abrams, this book is a nostalgic look back at the Skywalker saga as it comes to a close. I Am C-3PO: The Inside Story reveals Anthony Daniels’ vulnerability, how he established his role and what he accomplished, and takes listeners on a journey that just happens to start in a galaxy far, far away.

Music from the original motion picture soundtracks for A New Hope, The Empire Strikes Back and Return of the Jedi was composed and conducted by John Williams. It was performed by the London symphony orchestra in 1977, 1979/80 and 1983. Copyright to the remastered 2018 recordings are held by Walt Disney Records & Lucasfilm Ltd.

Music from the original motion picture soundtracks for A Phantom Menace was composed and conducted by John Williams. It was performed again by the London Symphony Orchestra in 1999. Copyright to the remastered 2018 recordings are held by Walt Disney Records & Lucasfilm Ltd.

Music from the Star Wars movie The Force Awakens was composed by John Williams, conducted by John Williams and William Ross and performed by the Hollywood Freelance Studio Symphony in 2015. Copyright to the 2015 recording is held by Walt Disney Records & Lucasfilm Ltd.

What listeners say about I Am C-3PO

Anthony is a truly great wordsmith.and his insite from his point of view is a truly unique.

but his overly dramatic approach to normal issues in work and life is annoying. And does not do anything to dispel the view he was difficult to work with.

Eg he got a wet foot from a puddle. oh the humanity .

As a massive star wars fan I was reluctant to buy this,,but a different tilt on the saga was worth a look. Big mistake!! the tales of "peril" are dull , and the man is clearly a snob who had 3PO not come along would be seen in the background of the Queen Vic at best! .Also the use of the word "mirth" in many a dull story was annoying.The odds of successfully navigating through this book are 3720 to 1.

A must listen for all Star Wars fans

A fantastic listen. A well written and read book. I couldnt imagine it being read by anyone else. Like he did and does with C3PO Anthony Daniels brings this book to life. Listening to this book it is easy to imagine being there watching everything happening. A book that is best listened too than read as Anthony Daniels just makes it better and is how I will be recommending to my friends how to read/listen to this amazing book. It really is a masterpiece. Thank you Anthony Daniels for bringing both this book and the much loved C3PO to life.

I found this really hard work. AD is a great narrator but I found it terribly boring. So much about C3PO's suit. Barely anything on the co-stars, nothing by way of gossip or scandal. Nothing that I would describe as particularly insightful. Absolutely nothing on ADs life, family, friends, etc which I found bizarre.

this was hard work to listen to. disjointed and you can feel his bitterness in his performance

As a 70's child and an avid star wars fan, C-3PO was part of my childhood and as such I was really looking forward to this book especially as it was narrated by the man himself, however I found it simply turgid.
The negative, bitter, monotone narration combined with a rambling narrative and astonishingly boring anecdotes have left me cold and disinterested in the remaining 3 hrs of the book.

Absolutely brilliant, detailed and honest account by man that played one of my childhood heroes. listened to this whole book in just two days and found it fascinating. First class listen.

Thank you Anthony for sharing your experiences and difficulties in bringing a most loved character to life. Thoroughly enjoyed every chapter! When I rewatch any of the saga, it will be with a much greater appreciation for your dedication to immortalising Threepio.

I am so sorry to say that I did not really enjoy this book. I was excited to hear it. Sadly, I stopped several times and had to convince myself to go on. At times it is interesting and many times not. There is a lot of whining about how unfairly Anthony Daniels was treated which would have been good to remark but not all the time. It seems to me that he just cannot let go of this feeling.
On the other hand I could tell almost every time when there was editing in the text, when he continued the sentence and in the middle it was edited together with the first part of the sentence... as for a while you hear his voice twice. This is poor editing.
As there are parts in it which are quite nice to know and a few anecdotes I am not saying that you should not listen to it - I am just saying that to me this was an under average listen in almost every way.

I'm a big Star Wars fan, and this book provides some insights that I had not across before. I'm glad I listen to it, but...

I was initially saddened to learn of the fact that Mr Daniels was (spoiler) effectively cut out of the marketing process of A New Hope in 1977. The fact that the producers tried to make people believe that C3PO was a real robot is sad and wrong. This point was made quite early in the book, but then brought back again, and again, and again, to the point that it verges on self pity. the very end where Mr Daniels asks George Lucas to breakfast to discuss his lack of appreciation for C3PO's performance is the final straw, and it felt to me a touch ungrateful. Mr Daniels has had an extraordinary piece of luck in being cast in Star Wars and has built an entire career from this (and not much else - or at least nothing else worth putting in a biography). He talks about being underappreciated on a regular basis and it becomes extremely tedious - his legions of adoring fans who appreciate someone tottering around in a gold suit obviously aren't enough, neither apparently is the a net worth of over 8 million dollars.

At the end of the day, C3PO is hardly the cornerstone of the saga that Mr Daniels clearly believes him to be. R2D2 makes relatively few appearances in this book (probably explained by the revelation that the two actors don't get on) and actually, this treatment comes across as rather similar to that which Mr Daniel's apparently experienced himself. R2D2 is far more central to the saga than C3PO, yet he is only ever talked about in passing.

The word iconic is vastly overused throughout the book, as is brilliant. The performance is charming enough as, let's be honest, C3PO's voice is Mr Daniels' voice.