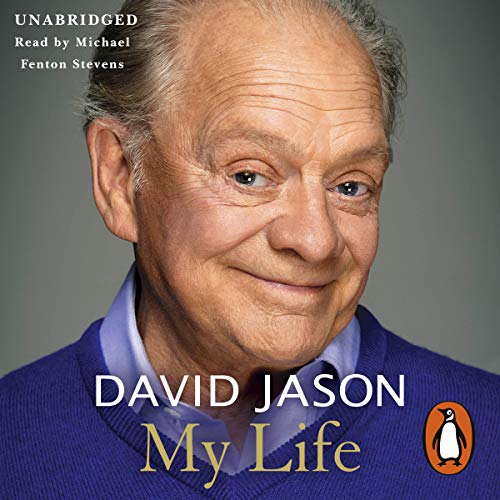 By: David Jason
Narrated by: Michael Fenton Stevens
Try for £0.00

The long-awaited autobiography of one of Britain’s best-loved actors.Born the son of a Billingsgate market porter at the height of the Second World War, David Jason spent his early life dodging bombs and bullies, both with impish good timing.

Giving up on an unloved career as an electrician, he turned his attention to acting and soon, through a natural talent for making people laugh, found himself working with the leading lights of British comedy in the 1960s and '70s: Eric Idle, Michael Palin, Bob Monkhouse and Ronnie Barker.

Barker would become a mentor to David, leading to hugely successful stints in Porridge and Open All Hours. It wasn’t until 1981, kitted out with a sheepskin jacket, a flat cap, and a clapped-out Reliant Regal, that David found the part that would capture the nation’s hearts: the beloved Derek ‘Del Boy’ Trotter in Only Fools and Horses.

Never a one-trick pony, he had an award-winning spell as TV’s favourite detective Jack Frost, took a country jaunt as Pop Larkin in the Darling Buds of May, and even voiced a crime-fighting cartoon rodent in the much-loved children’s show Danger Mouse.

But life hasn't all been so easy: from missing out on a key role in Dad’s Army to nearly drowning in a freak diving accident, David has had his fair share of ups and downs, and has lost some of his nearest and dearest along the way.

David’s is a touching, funny and warm-hearted story, which charts the course of his incredible five decades at the top of the entertainment business. He's been a shopkeeper and a detective inspector, a crime-fighter and a market trader, and he ain't finished yet. As Del Boy would say, it's all cushty. With an introduction narrated by David himself.

What listeners say about David Jason: My Life

Loved this book so much

Would you consider the audio edition of David Jason: My Life to be better than the print version?

For me yes, a very relaxing way of listening

What other book might you compare David Jason: My Life to, and why?

What about Michael Fenton Stevens’s performance did you like?

It was read very well, it didn't take long to get into it not being David who read the whole story, but it was so nice to have David Jason read the first part of the book.

The life and laughs of Sir David Jason

I enjoyed this book so much, it was really quite a sad moment when I came to the end of the book, David Jason is a true gem we are all so lucky to have him, all the enjoyment he has brought to so many. Thank you so much

I'm an avid fan of all things David Jason So was delighted when this audiobook came out, initially I was really disappointed that David Jason didn't read the whole book, However Michael Fenton Stevens did a realyl good job at something that must have been difficult to do. Very interesting to hear about all the aspects of the stage and behind the scenes at Only fools. I really recommend it.

David Jason's biography is one I know after just finishing it,that I will want to listen to again. A lovely book of one of our most loved actors who many of us grew up with on the TV. Had me laughing when mentioned had nailed leonard's shoes to the floor as a joke in the dressing room and moved at many parts especially hearing the poetry from the first 'guvner' Ronnie Barker, before he was given the same fond title when Ronnie retired.

Won't say anymore as don't want to spoil it for you.

This book is so well written, you can hear David Jason's voice behind every word. A blend of honest integrity with quick-witted humour. Like other reviewers, I was initially disappointed that David only reads the introduction - however Michael Fenton Stevens does such an admirable job of narrating and captures all the liveliness of David's story. I would recommend this to anyone - it is one of those rare books that you don't want to end.

The free download of the first chapter is a big misrepresentation as David Jason narrates this chapter giving the impression he’s the books narrator and he’s not. I feel a little conned as I bought it for my blind mother and she chose it on listening to David’s narration. While the narrator is good I feel it loses something and it’s also rather sneaky marketing. Buyer beware!!

I have to say I enjoyed David's ability to put a humorous twist on pretty much anything he experienced in his life that may seem sad or negative to others. As a huge Only Fools and Horses fan, I am biased when I say I found listening to his experiences with the show the most interesting part of his life story.

Could you see David Jason: My Life being made into a movie or a TV series? Who would the stars be?

I would love to see Mr Jason's life story depicted on film and I think it has the potential to one day do so!

This book really details David Jason's career form the rely days right up until his acting in the BBC drama series, Frost. Conversely, I did find the first two to five hours a little bit boring as a lot of detail was put into explaining his early days on stage. I didn't find this time in David's life particularly interesting, as I thought I could have been reading about any actor at that point. However, it picked up thereafter and was very interesting to hear of David's exploits and antics in between acting and performing.

If you could sum up David Jason: My Life in three words, what would they be?

An autobiography that I could join in

What about Michael Fenton Stevens’s performance did you like?

Well read giving it life and depth, not trying to sound like David Jason

The death of his first partner

I'd have liked more on his time with Ronnie Barker.

Really struggled with this one

The accent of the narrator

Would you be willing to try another book from David Jason? Why or why not?

No not really this was a little boring

The cockney accent in long stints can be unbearable

A great story, however made a mistake, thought this was narrated by David Jason. Not quite the same narrated by a second party. Would have been so much better to listen to the author.

Great story by a great actor

This is a class apart a wonderful tale full of incident and acclaim and wonderful characters most of whom we loved.

David Jason is a hugely successful actor by any measure. Viewing figures, financial success, and the admiration of the public and his peers. For us, seeing him as Sir David, with his many BAFTA awards, it might be difficult to imagine that there was a time before Only Fools And Horses. Jason recounts those days, telling of his childhood in Finchley, his family life, his first forays into amateur dramatics and his move into professional theatre. He tells of his early television work in the 1960s with Do Not Adjust Your Set, how he was bypassed for Corporal Jones in Dad's Army and Frank Spencer in Some Mothers Do 'Ave 'Em, and how he eventually landed the roles for which he is best-known. The stories of making A Touch Of Frost are interesting, who knew that the cast played pranks on one another during location shoots?
Jason also talks a little about his personal life. His love for his family is clear, and it's nice to see how that developed with his girlfriend Myfanwy Talog and wife Gill Hinchcliffe.

The book is almost a textbook of how a dedicated actor can succeed in his career if he never gives up, works hard, and makes some difficult choices.

Michael Fenton-Stevens makes a very professional job of the reading, putting a lot of humour into the anecdotes and doing a few voices sparingly, so that it doesn't distract from the text.

A well-written, witty, and touching memoir, "My Life" - the title's blandness notwithstanding - enjoyably captures the small and big moments that made one of my favorite actors. I found myself having to pause the audio at a few spots because I couldn't hear the reading over my laughter. I found myself feeling happy and proud for the author at the end (no spoilers). David Jason's gift for writing is rare among college graduates, and the fact that he never attended even drama school makes this book that much more exceptional. Michael Fenton Stevens again delivers a rich performance, perfectly portraying the author's personality.

Such a good book to listen to hear the life story of such a talented man. As well hearing about Ronnie Barker & Nick Lyndhurst & other favourite actors. P. S. The episode of Only Fools & Horses with the inflatable dolls was my favourite

Seldom have I had the good fortune to read (listen) to such an entertaining, amusing and well written autobiography. I became acquainted with Mr. Jason's "Jack Frost" persona through watching his sterling performances on the series "A Touch of Frost" which was shown here in Canada, but otherwise, I knew little about his acting career or life. He writes about himself with great humour and humility and the descriptions of his friends, co-actors and family bring them all to life. I would recommend this book to anyone looking for a really good "listen"!