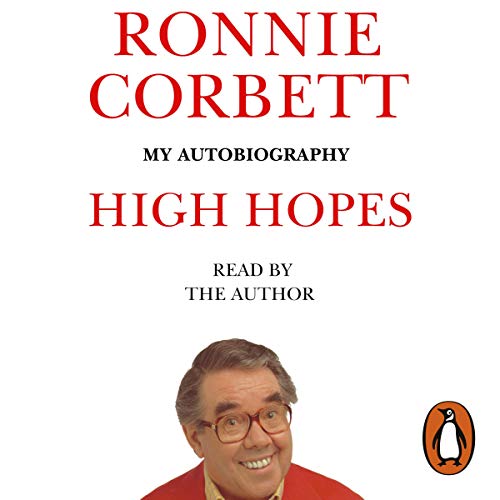 This is my autobiography, the exciting story of how I, Ronald Corbett, the son of an Edinburgh baker, became convinced that I had to seek my fortune and become an actor, of how I pursued that goal, found fame on television as one of The Two Ronnies, and managed to meet a fabulous cast of extraordinary people along the way.

First I'll take you back to my schooldays and reveal the technique I developed for estimating the height of a girl before daring to ask her to dance. I'll explain how I first met David Frost, John Cleese and Michael Palin, and shamelessly reveal how I once played Othello to Danny La Rue's Desdemona, having just had dinner with Laurence Olivier. I'll also tell you about the time I was suddenly struck down by a mysterious illness that destroyed my sense of balance and prevented me from going on stage for several years.

Altogether I must admit, it is a truly dramatic story. I only hope my mother won't be too shocked!

What listeners say about High Hopes

Although very interesting, I found that there was a distinct lack of chronology though out the book. Jumping around from chapter to chapter.
The most disappointing and annoying part however, was the recording. The audio seemed to be fading in and out at times and this made it very difficult to listen to at times. Plus, the occasional musical interludes just left me confused.

Ronnie Corbett reads his autobiography, first published in 2000.
He is a pleasant enough companion as he recounts his (mostly) fortunate life. No skeletons in cupboards here.
I listen to most of my audiobooks more than once, but won't bother with this one. It's not that it's bad, it's just a bit 'beige'.

Touching and glorious the class of this legend pours out in his own voice . You feel the love he has for his family and friends and of course Ronnie Barker

The story of Ronnie was interesting his years of work in the entertainment industry is second to none. His reading was very good but the music in between the sections was very distracting.

Loved the booked, really funny and good insight into his life. sad he is gone :(

I loves it has a warm feeling about it and show what hard work can bring you also some sad parts. You will love it great summer read

Not quite Dizzy Heights

An ok kind of biography. I'm not quite sure whether Ronnie Corbett reached the same level of superstardom as Ronnie Barker. I enjoyed Ronnie c in partnership with his colleague. Feels like he is making up ground with Ronnie b and that somehow comes across in the book or the Reading. a lot of name dropping and the haves and have not.. came across like a Tory. was reasonably read which is always nice and a preference by the subject. and because of the happy memories I have of him with Ronnie B have given it the score that I have. particularly the phantom raspberry blower which I believe all the raspberries blown by David Jason. anyways enjoy.

A Big Tale from a small funguy.

A really good read/listen 👂. Lots of interesting parts to Rons life,but at times he does rabbit on a little too long about his Golf life. But loved it just the same.

listened whilst traveling, very well written and presented brilliantly. The two Ronnie's was my favourite comedy program when I was younger

I love Ronnie Corbett, he's like everyone's favourite Uncle, and this is just what this book is like, an old friend taking you into his confidence and telling you tales of his life. If I'm being honest he does ramble a bit occasionally but overall a great book by a National Treasure and sadly missed entertainer. It was lovely to hear his voice again.