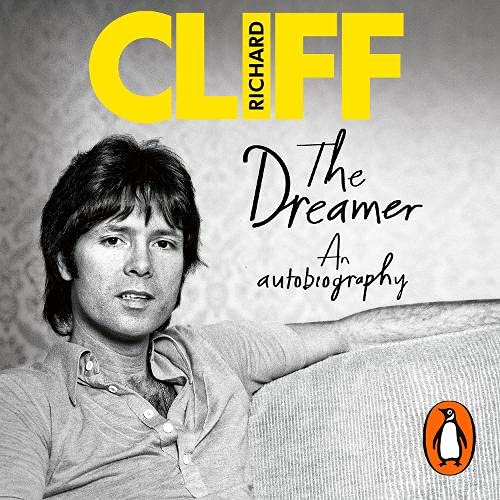 Cliff Richard tells his story, in his own words, in his highly anticipated new autobiography.

Achieving a hit in every decade since the 1950s, Cliff Richard stands alone in pop history. Coming of age in 1950s London, he began his music career at Soho's legendary 2i's Cafe, and now he's approaching his 80th birthday with record sales of over 250 million and counting.

Cliff Richard was a pioneer, forging the way for British rock 'n' roll with his unique sound. The original British teen idol, his incredible story takes us into the studio of TV's first pop show Oh Boy!, through 40 years of Top of the Pops and playing live up and down the country and across the world, with a constant backdrop of screaming fans.

Cliff looks back on his humble upbringing and how he went on to fulfil his wildest dreams by becoming a pop star and even a film star. He talks about finding Christianity, reflects on the ups and downs of life in the public eye and reveals how the false allegations against him changed his life forever.

He's seen era-defining pop stars come and go and he's still making new music, with a new project to be released this year. As a teenage Elvis fan in Cheshunt, this may have seem a distant dream. Here's his story of how he made it all happen.

"Before Cliff Richard and The Shadows, there was nothing worth listening to in British music." (John Lennon)

What listeners say about The Dreamer

You have got to admire Sir Cliff Richard, A best selling teenage recording artist in the 1950's and 80 years old this year and he is still going strong. The Dreamer is not his first autobiography, My Life, My Way in 2009 was heavily ghost written by royal biographer Penny Junor; since then, however, well publicised events have had a devastating impact on his life. Much of this book is a standard reading of Cliff's incredible life. We hear of his early life in India and his family's move to the leafy London suburbs.where he experienced prejudice from his class mates. There were two epiphany moments during the young Cliff's life, the first was hearing Elvis Presley for the first time and the second was discovering Jesus Christ. Impossibly popular and fashionable in his early years and impossibly unpopular and unfashionable (at least in the eyes of the newspapers and radio broadcasters) in his later years but with a legion of fans who have made sure that each of his 100 plus albums have chartered and his tours have consistently sold out Cliff is certainly an enigma who constantly defies the critics.
Cliff talks bravely about the well publicised salacious and sickening allegations against him and how, after living a dream, his life became a nightmare. It is testament to him that he has come through this and looks forward to the future with excitement and optimism. It is time for a re-assessment of Cliff Richard and for us to celebrate his extraordinary talent.

in one word outstanding

A beautifully written and narrated book. . I have been a fan for 60 years. I met him in Antwerp Airport and at his Quinta in Portugal. Seen him in concert numerous times and adore him. Gods bless you Cliff xx

Listening to Sir Cliff reading was awesome he was funny and very entertaining.
Sir Cliffs life story had hardships and amazing moments.

Fantastic book countnt fault it at all

Loved this book, didn't want it to end. It was just as if Cliff was sitting next to me, telling his story.

Comprehensive autobiography of a musical legend.

Straight from the horses mouth, all the true facts of Cliffs life, covering his early years in India right up until the awful false allegations and bungled investigations by South Yorkshire police.

This audiobook is well worth a listen. Really enjoyed listening Sir Cliff tell his story

Long may the dream continue...

A must read, especially enjoyed it being read by Sir Cliff himself. His passion and gratefulness shines through.

He has given so much to this country over the years and he has led such an amazing life.

As a fan of 20 years, it’s often hard to find out new things about his life, after reading and listening to everything he has produced. However, I have discovered lots of again fascinating insights into a national treasure.

I highly recommend this read, by a man of impeccable values and outstanding talent.

Thank you for everything Sir Cliff. Long may the dream continue.

A fab listen for any Cliff fan

It was great to hear Cliffs story from his point of view and in his own voice.
Anyone who is interested in British rock and or pop music is given a unique view of life on the inside making dreams come true.

Cliff reading to me

I have never used audio books before, but so glad I did, as I found listening to Cliff telling his story, with all the added extras that reading it yourself you don't get, for one, pages of a book don't sing to you and listening to him, you hear the emotion and the happiness in various parts of the book, emotion that brings tears to your eyes and in other parts makes you laugh out loud, one of the saddest parts for me was the end, hearing him talk of epitaphs and when he is no longer here, don't really want to think about that, even though you know it will happen someday, long into the future i hope, as the world will be a sadder place without him, he has kept me going over the years, as he has done for so many others, long may he Reign. Love you Cliff xx

The pace and content draws one completely in and reveals another Cliff Richard “Hit”! Loved hearing his story in his own words.

How many 50's rock 'n 'roll singers do you know that have stayed active over years and are still performing & recording now. I only know of one. It's a shame Sir Cliff's popularity in the USA has been spotty. He's produced an amazing catalog of rock and pop songs over the years that most of has been ignored here in the USA. Do yourself a favor and read or listen to his excellent autography. Then check out The Singles collection that collects 127 of his singles from 1958 to 2002. You'll be surprised at what great music you may have missed hearing.

An absolutely wonderful and well written autobiography of Sir Cliff's amazing life written by the man himself, Who still continues to inspire so many people and fans around the world, America and the world had Elvis and the UK and the world has Cliff!.
This book covers all aspects of Sir Cliff's life from his humble beginnings to his meteoric rise to worldwide stardom beginning in 1958 when a young 17 year old chap called Harry Webb began his recording life with a Rock & Roll classic called "Move It"
The stage was set and the fireworks flew as each new decade brought his story to the world, classic songs, unforgettable movies, concert tours and so much more, but as you will see in his autobiography Sir Cliff's feet are very much still firmly on the ground.
This book and his story are a joy to enjoy, the good, the bad and the ugly! Which is mention to the terrible and groundless accusations brought by the BBC, I recommend this autobiography very highly, it is superb and rich in detail, reflection and insight into what makes and sustains a global superstar with true staying power.I
Thank you Sir Cliff and thank you Audible for making this title available to us all.

Wow! what a great book.

such an amazing journey, thank you for sharing your life, memories and your positive attitude. knowing your trials and successes makes my life seem right on track. I don't have your money, but I can certainly get up, ruse up and get on with it.

What a joy to listen to Sir Cliff, a man I have always admired and appreciated. Felt enormous outrage when he was so undeservedly, brutally persecuted by police and media. May God bless him always and fully heal every wound as he walks in the forgiveness that bestows lasting peace. Thank you, Sir Cliff, for your sterling example and lovely music!