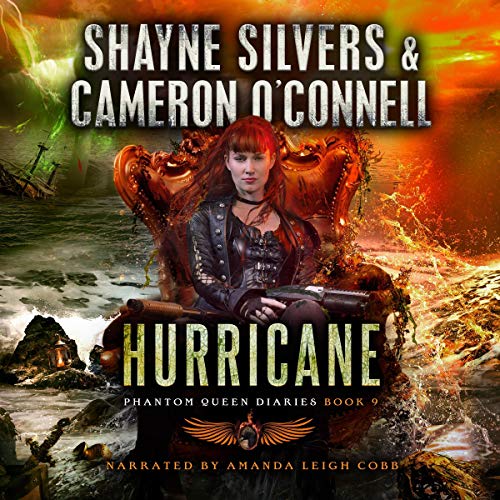 What’s a goddess to do?

After being lost at sea and taken prisoner by yet another denizen of the Titan realm, Quinn finds herself cold, wet, miserable, and very much alone. Until a familiar and unexpected face steps back into her life to remind her who she is - and has always - been: A fighter. Following this revelation, Quinn can only acknowledge that some journeys require circuitous routes, even if that means attaining her freedom and rushing - not to the rescue of her besieged allies - but to the mythical island of Aeaea, home to the infamous witch, Circe, where Quinn will be confronted with cryptic visions of the present and a brutal choice: To sacrifice everything she is on the altar of what she could become, or to continue stumbling around in the dark.

No matter her decision, Quinn knows she must see order restored to the Eighth Sea if she hopes to save her friends and allies. But at what price? The answer to that could cost Quinn her very humanity and will reveal stark truths about her role in the war to come. A war her father predicted and, apparently, prepared for. A war which has already begun to claim the lives of those she cares about and will likely claim many more before all is said and done.

But, before she can worry about any of that, Quinn must go to battle against her old friend and nemesis, rescue her besieged friends, and honor her end of a lopsided bargain - a task which will pit Quinn against her wildest nightmares and her darkest dreams with just one person at her side...a certain mouthy wizard from St. Louis - Nate Temple.

The waters get even murkier as Quinn gets caught in a current that draws her closer and closer to the secrets which surround Atlantis, to the gates of the Underworld and the lost souls which lie beyond, and to the mysterious figure of her father, a wizard so powerful he defied time itself.

Some people like to say that when it rains, it pours. But then they must never have met Quinn MacKenna...because in her case it’s always hurricane season.

What listeners say about Hurricane

Quinn’s story is sadly just annoying me now. If it wasn’t part of the wider templeverse that I’m listening to I’d have stopped listening to her, probably a couple of books back.

Now she has yet another personality and yet more powers coming and going. The reasons for the disappearance and arrival of powers never really making sense. I used to really like her take no crap, protective of her friends personality, but like her personality has become I’m finding the whole thing grating and annoying now sadly

I’m also tiring of the authors overuse of his little nicknames, va-giants is both stupid and pointless. He does the nickname thing all the time, some are genuinely amusing, some I’m indifferent to and some, like this one, are just stupid. There’s just too many of them, the overuse of it gives them less comedy value.

Another Great Entry in the Templeverse!

With over 1000 titles in my library, the books in the Templeverse series are some of my favorites! The writing is great and wonderfully free of the errors in grammar and incorrect word choices that have become increasingly common. The characters are believable and relatable so I’m invested in their continuing adventures and no one could possibly voice Quinn better than Amanda Cobb! The only drawback for me is that Quinn seems to be the one character across all books in the series that isn’t maturing as she gains more experience. She actually seems to have regressed into a petulant, selfish, demanding, and dangerously naive 15 year old as her most common reply to questions is “What the hell is that supposed to mean?!” After all her extraordinary experiences and how often her anger driven impulsiveness results in needless complications, she still only rarely stops to actually think things through and even then, only after she’s made a fool of herself. I’m beginning to wonder if Quinn isn’t destined to end her part of the series as either the token TSTL character sacrifice or the one whose refusal to mature cements her place among the villains.

“I woulda made a great pope” the best dying words ever. This is the 3rd series for me. Ive already been through Nate temple and feathers and fire up to book 8 this series is by far my favorite of the 3. Quinn is always such a smart ass that it makes me laugh. Plus rarely do the big bad heros actually lay waste of their enemies. But goddess Quinn really kicks some ass.

My only issue was when the narrator did Nate. He sounded like a teenager.

Best yet in the series

Amanda Leigh Cobb is at her best in this book bringing back the passion and humor to Quinn. There’s much revealed and it’s a great and poignant addition to the Templeverse.

Another great entry in this series!

Cameron and Shayne have put together a fantastic series and Amanda knocks Quinn out of the park! Can't wait to see what the underworld holds!

I’m super impressed by how far Cameron stepped up his game in this book! It has everything and more and the cherry on top is a mind blowing dream world starring Nate and Quinn! I don’t want to reveal too much, just buy this book now and carve out 6 hours because you won’t stop once you start....it’s that good folks! Well done boys, well done!!