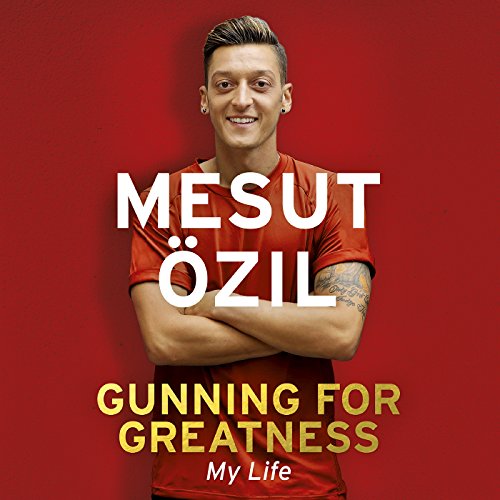 Gunning for Greatness: My Life

Mesut Ozil is a midfield magician, casting an elegant spell over opponents and conjuring passes through gaps lesser mortals can't even see. After an eventful sojourn among the Galacticos of Real Madrid, he has savoured silverware at Arsenal, while in 2014 he lifted the World Cup with Germany.

But his life and career have been a test of resilience. Growing up in Germany's Turkish community, he faced prejudice from those who claimed his dual identity would prevent him giving his all for the national team. Later came questions over a different type of commitment, the kind levelled against those, like Mesut Ozil, who excel in football's finer arts rather than relying simply on running and ruggedness. He has proved concerns on both these issues lack substance.

In Gunning for Greatness, Mesut Ozil reveals the inside stories of his relationships with Jose Mourinho and Arsene Wenger, his quest to help the under-fire Frenchman restore Arsenal's preeminence - and how he silenced the sceptics by conquering the world.

What listeners say about Gunning for Greatness: My Life

shame it never carried on till now,

a lot of what he says seems to have changed, Jose is a Honest and Fair Person and I only ask for wages I deserve. but he has had a tough time of it, it seems with every club. has been treated badly by the Press and suffered a lot off the field as we know that continues to this day

Nothing good about arsenal

All about Madrid. It was very boring. Worse book I have listened to. Will not listen to ozil book again

There needed to have been at least 50% coverage of Arsenal, in my view there was barely 10-15%. Furthermore nothing at all controversial was said, making it frankly boring to listebn to as an Arsenal Supporter.

Would you ever listen to anything by Mesut Özil again?

Given his admiration for Jose Mourinho, Mezut Ozil this is extremely unlikely.

I did not like the reader. He made the already uninteresting story tedious to listen to.

The front cover indicates 'Gunning'/Arsenal which is misleading given how little mention there is of Arsenal in the book.

A must read for any soccer fan. So entertaining it took only 2 days to finish.

Another player who had to overcome obstacles and make his own choices as his career unfolded. Ups & downs, good and bad choices as far as the team's he played and the people who represented him as a football player and was around with. He also has his routines and rituals as an indispensable part of his game. Worth stealing some of them. The way he "sees" the game and takes advantages of the spaces along with his technique are amazing. Great autobiography because it provides with plus and minuses for me to take into account and draw my own conclusions. :)

Not a lot of arsenal

The man in questions life story is very interesting, he comes from a guest worker family taken in originally after World War 2 to help with the reck struction effort. His story in the bundesliga and la la ligue are interesting but he hardly ever discusses his time in arsenal

What was one of the most memorable moments of Gunning for Greatness: My Life?

Pauses life insights along side a biography of his life at that moment.

He reads how it is and great emphasis on the tone of the book.

I have always admired Mesut Özil as a football player. Being able to read this book and understand more about him as a person as well as certain areas of football was very interesting. I found this book to be inspirational and humbling.

loved it. addicting. you'll thoroughly enjoy the very honest side of things from Ozil, from his early struggles at Schalke to his determination at Arsenal. Read it then read it again!