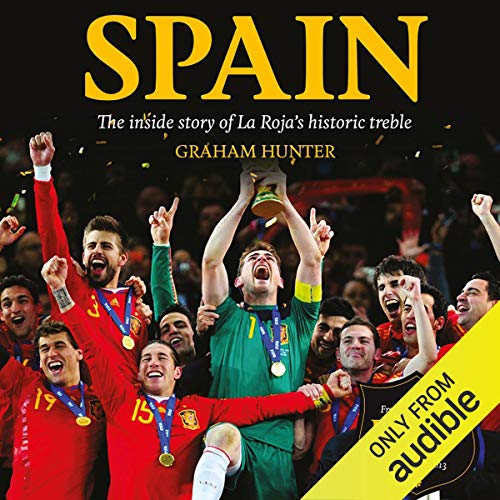 This is the story of the greatest achievement in the history of international football. After decades of failure, Spain won the European Championship in 2008 and then the World Cup in 2010.

At Euro 2012 they became the first team to win three consecutive tournament titles. Graham Hunter was inside the dressing room as the players celebrated after the finals of the World Cup and Euro 2012. His access-all-areas pass at all three tournaments has resulted in remarkable eyewitness accounts and new interviews with star players and the men behind the scenes. Across every day of La Roja’s treble, the author takes you on to the training ground; on the team bus; into the canteen; inside the hotels and on to the pitch. You’ll hear the team talks that inspired Spain to victory plus the inside stories from Fernando Torres, Xavi, Iker Casillas, David Villa, Cesc Fàbregas, Andrés Iniesta, Gerard Piqué, and the others behind an unprecedented era.

Graham Hunter is a journalist of international reputation and covers Spanish football for Sky Sports, the BBC and newspapers and magazines across the world. He writes and interviews for UEFA.COM and has been a TV producer for FIFA.

What listeners say about Spain

Didn't want it to finish.

loved this book.
will probably listen to again.
a great insight into what goes on in the background of a Spanish national team.
Graham Hunter excels.

This is much more than a tale about the World's most successful national football team. It's a delicious slice of history too. But more than both of these, it's an exposition of the psyche of the people,, individually and as a team, who lived it, who made it all happen. Footballing skill played it part, for sure, but the secret ingredients to success were the strength to be honest, the fortitude to see through a vision, and the intelligence to understand that the realisation of the vision would be through upholding the values of humility, family, and fidelity to the team. Graham Hunter reveals his understanding these values, no doubt because they are his values too. The author also reads beautifully too, making the recounting all the more personal, affording the listener a front-row seat at this heart-warming drama. ¡Bien hecho!

brilliant from graham hunter again along with barcelona book. some brilliant contributions and well presented

Even though I'd heard some of the stories already there were some real nuggets I was never aware of.

This is definitely the inside story of potentially the best international team ever.

This book provides a real insider look at the building of the great big red footballing machine. If you are a real football nerd, that craves for this type of info you will not be able to put this book down.
Funny, neat, informative and most importantly entertaining. Good book for any football fan.