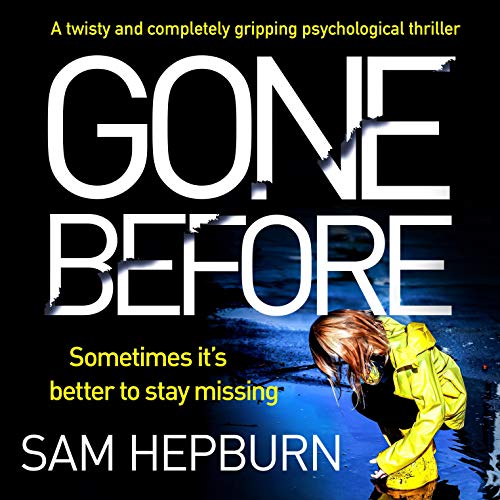 By: Sam Hepburn
Narrated by: Nneka Okoye
Try for £0.00

"My name is Phoebe Locklear. I think I’m your daughter."

It’s been 15 years since five-year-old Maya Duncan disappeared. But when a young woman turns up at Kay Duncan’s door, clutching a yellow rainhat with Maya’s name stitched in the back, it seems she might have come home at last.

Phoebe is convinced that she is Maya and that the woman behind the door is her real mother. When she sees Kay, the memories come flooding back, and it seems they are to be reunited at last. But when a shocking discovery leads to tragedy, Phoebe is left grief-stricken and riddled with guilt.

Alone and unanchored, Phoebe travels to London to dig into Kay’s life, hoping to uncover the truth behind her own identity. But as she pieces together Kay’s past, Phoebe discovers a disturbing link to the woman who raised her and a terrible secret that even now could put her life in danger.

Gone Before is an utterly addictive "ripped-from-the-headlines" thriller. Perfect for fans of Lisa Jewell, Gone Girl, and The Silent Patient.

What listeners say about Gone Before

I had high hopes but I think the expressionless narrator was very bland spoiled it. I also concluded thlat the story was disjointed and hard to follow. Have listened to better!

This storyline was very gripping and very exciting

I absolutely loved it and couldn't put it down. I wish there was another book.