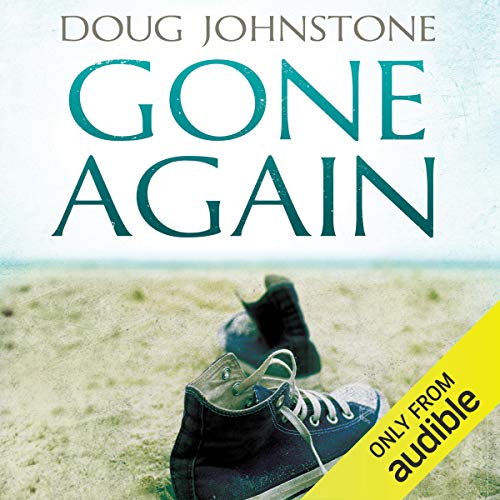 By: Doug Johnstone
Narrated by: Angus King
Try for £0.00

"It's just to say that no one has come to pick Nathan up from school, and we were wondering if there was a problem of some kind?"

As Mark Douglas photographs a pod of whales stranded in the waters off Edinburgh's Portobello Beach, he is called by his son's school: his wife, Lauren, hasn't turned up to collect their son. Calm at first, Mark collects Nathan and takes him home, but as the hours slowly crawl by he increasingly starts to worry.

With brilliantly controlled reveals, we learn some of the painful secrets of the couple's shared past, not least that it isn't the first time Lauren has disappeared. And as Mark struggles to care for his son and shield him from the truth of what's going on, the police seem dangerously short of leads. That is until a shocking discovery...

Doug Johnstone is the author of four novels, most recently Hit & Run, acclaimed by Ian Rankin as "great slice of noir" and by Irvine Welsh as "a grisly parable for our times". He is also a freelance journalist, a songwriter, and a musician and has a PhD in nuclear physics. He lives in Edinburgh.

"Excellent ...sharp and moving." (The Times)
"Calling to mind the best of Harlan Coben, Johnstone shows us how quickly an ordinary life can take one dark turn and nothing is ever the same again." (Megan Abbott, author of Dare Me and The End of Everything)

What listeners say about Gone Again

None of the characters here were likeable. The main protagonist, though portrayed as the angst ridden husband, was also a thug in his own way. However, I have enjoyed many books where the characters are not likeable, so that can’t have been my problem here. I struggled to engage with this story. It was a long way in before it ‘got going’ and when it did, the events just seemed rather implausible. The narration was excellent and I’m sure that was why I stuck with it, but it was not worth my time.

Angus King brings all the characters to life and is accents are just the best!
Great story too!

Overall I enjoyed listening/reading book. Although a short way in I was a little puzzled with Mark's prioritisation. This continued throughout the book. I don't want to spoil but why would he deal things in that way? The boss' voice wasn't pleasant.

Change Mark's order of importance of dealing with major happenings.

Have you listened to any of Angus King’s other performances? How does this one compare?

Not listened to any others

Could you see Gone Again being made into a movie or a TV series? Who would the stars be?

No. At risk of repeating ..... It's bizarre how he goes to see his wife's boss so soon after the discovery.

Excellent enjoyed the book and the story teller.

Love the story teller, loved his voice. Good story I could not wait to settle down at night to listen to it.

I was really liking the story, then it became distasteful. Sorry I cannot recommend this book.

Read it in one go

Narration easy to listen to. I didn't pick up any excessive bad language as previously mentioned. I don't see how you can have a story of violence without some bad language.
Overall a good book. Short enough not to get bored.

There was too much swearing in this story for my liking !!at one point every other word !

Started off really well with a story of 'normal/everyday' people, in the middle of an unusual situation. Their lifes turned around, with emotion and frustration, but spiraled into a unrealistic, far-fetched, stream of events.

just awful from start to finish, boring, dull, I never at any point felt any kind of emotion with this book, I couldn't wait for it to end. glad it was free

Had me questioning decisions the way through

Enjoyed this. Well written. Had an appreciation of the character. Found myself questioning his unchecked aggression, not so smart decisions, while wondering what I would do in the midst of being surrounded by people who had no empathy or heart seemingly. Tough subject wanted to know more. Great performance 👏

Language is deplorable. Absolutely no reason for all the "F" bombs.

The British accent was so heavy at times, I couldn't understand .

I listened for about 2hours. .marked it as read and deleting it from my phone

This author us new to me. I loved the story line and the relationship between the protagonist and his six year-old son. Some if the violence seemed overdone, but I was kept in thrall to the beautiful, lilting Scots of Angus King's narration.

The narrator saved it

I wouldnt have made it thru without Angus King's performance. I read/listen to this genre for escape. If I want to be depressed, I can do that on my own. So a lot of moaning until the end when the action just piles on until its ludicrous. My husband thinks Im weird for reading up to the end of a suspense book and then just putting it down in disgust when the action gets too ridiculous for me. I merely did some fast forwarding with this book-- did listen to the end, but only to be listening to Angus King.

"Page" turner. I was totally engaged with the characters. This will keep your attention.

Book starts out okay but when the wife disappears (not a spoiler) the husband takes matters into his own hands and pursues the case based on nothing. He's a photographer not a former black ops. Just stupid. I should have stopped listening at hour 2.

A slow start but enjoyable throughout. The action segments were described so well and in such detail the story came alive. It was like you could smell the sea etc. Superb narration made it even better. I enjoyed this one very much.

I choose an overall rating for this book at 4 stars, due to the excessive foul language. The story was very good and plot was riveting. There were so many surprises. I would recommend this book for teen to adult readers.

The Narrator’s style ruins the story

The narrator reads every, and I mean every sentence, like it is the climax of the chapter. Every sentence is read with intense grandeur and it is extremely distracting. I am an hour in and I just can’t anymore. His tone and inflections are beyond annoying.
The storyline sounds great so far; I am going to happily read it the old fashioned way so I can hear the Author’s writing.

Hope I didnt use a credit on this one!

Given two choices, our lead, Mark Douglas will make the wrong choice. No one to cheer for in this story, except maybe the son. The police come across as indifferent at best, incompetent at least. Narration was the best part. But I had to speed it way up to be done with the silly story line.

Not a bad story. Starts out strong

Did not care for Mark. He was fine for about half way through but every-time he was faced with a decision he invariably made the wrong one. His ability to problem solve in any way that included logic and not hitting was non existent. However I did enjoy the father son dynamic.