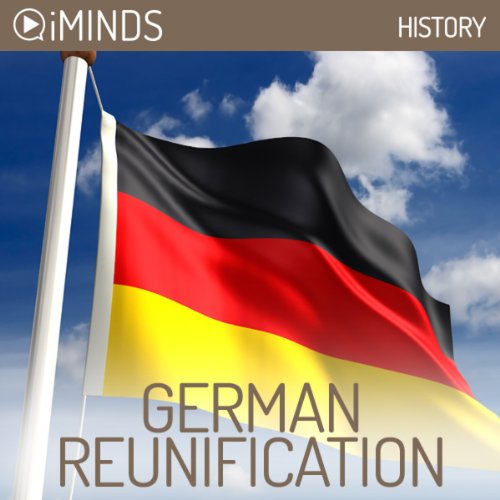 To outside observers, the course of German reunification appeared to unfold quickly, possessed of an inevitable momentum spurred on by Soviet reforms and economic collapse. As this iMinds history points out, however, the reintegration of East and West German society was a gradual process, wrought with cultural readjustments and crises in manufacturing and unemployment. Storied television actor Hamish Hughes strikes an even clip as he delivers this overview of reunification, a joyous occasion nevertheless fraught with growing pains. With the stoicism of an experienced documentarian, Hughes provides a fluid presentation of significant developments in the unification process - from the opening of the Austro-Hungarian border to merging of the Deutschmark.

When World War Two ended, the four Allied powers of the US, Britain, France and the Soviet Union divided Germany between themselves. This was to share the load of helping a war-ravaged country rebuild itself. The US, Britain and France were given land in the west of Germany and the Soviet Union was given land in the east of Germany. Due to the influence of the occupying forces, over time West Germany developed into a capitalist state and East Germany developed into a communist state.

What listeners say about German Reunification

Rejoining of East and West Germany

This eight minute listen is very good basic information about the rejoining of East and West Germany after the fall of the Berlin Wall in 1989. It accurately describes both the fears and the elation of the German people (east and west) during this historic event. The economy of what had been West Germany suffered for many years following reunification, and many of the westerners dreaded the event for just that reason. Our family lived in West Germany at the time of the fall of the Berlin Wall and was able to drive into was had been East Germany. We witnessed the horrid state of that nation, with smoke stained and dilapidated factories, roads in ill repair and homes that had not been cared for in decades. I like that this short audio explains the connection of the Soviet Union to East Germany and how that came about, because younger listeners need to understand the history behind how the division came about in the first place. Great, informative short.