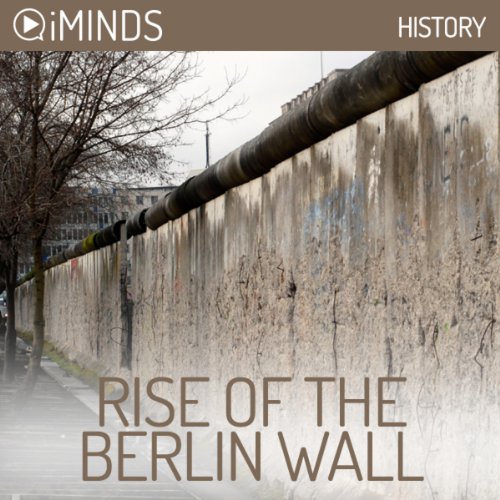 Rise of The Berlin Wall

When the Allied powers divided Germany among themselves following World War II, the countries' respective leaders initially suggested the occupation would last no more than a year, after which Germany would be reunited. Instead, East and West Germans were forcefully estranged from one another for four decades. Distinguished actor Hamish Hughes examines how the conflict between East and West escalated throughout the '40s and '50s - with Germany emerging a heavily contested hot zone - ultimately leading to the construction of the Berlin Wall. Hughes discusses key Cold War developments, including the Berlin Blockade and resultant airlifts, as well as the ever-changing daily lives of Berliners during this period. His documentary experience evident, Hughes is salient and fluid, packing a wealth of information into this brief survey.

Learn about the Rise of the Berlin Wall with iMinds insightful audio knowledge series. The Berlin Wall served as a monumental physical reminder of the differences in government between East and West Germany. After World War Two, there was a division of Germany between the Western Allied forces of the US, Britain and France and the Soviet Union in the East. Each assumed responsibility for a portion of Germany to help it back on its feet after the war. No one thought the separation would last for more than a year. Yet it lingered for the next four-and-a-half decades.

The tension which sparked the construction of the Berlin Wall occurred soon after World War Two ended. After the war, Germany was divided up into four zones, with the British, the Americans, the French and the Soviet Union each responsible for running a zone. The German capital of Berlin, although in the Soviet zone of Germany, was likewise divided into four sectors. As firm allies, the US, Britain and France worked closely with each other to bring about changes to their zones and sectors in Germany.

What listeners say about Rise of The Berlin Wall

It’s a good basis of the wall and how it came about, but if you’ve more time I’d recommend looking further for a longer and more thorough explanation. The BBC’s Tunnel 29 podcast is a good way to learn more; using the investigation of one plan to dig a tunnel under the wall. It gives a more human-level understanding of what life in the DDR was like and why people would risk so much to escape to West Germany.

Nice little bit of trivia knowledge. It wasn't deep, and isn't meant to be so. Just a quick bit of knowledge on something that I already knew little about. Now I know a smidge more. Great way to pass a few minutes. I don't know that I would pay for it separately, but it is free with my Audible membership. Nice little perk value.