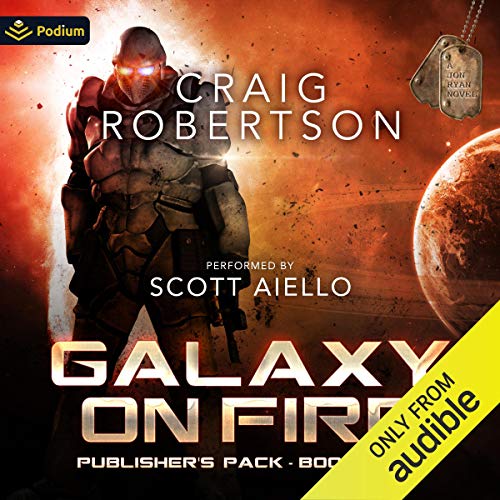 By: Craig Robertson
Narrated by: Scott Aiello
Try for £0.00

If you can't be dead, make sure someone pays for that fact dearly.

When he was a human, Jon Ryan always looked forward to a better future. We all do. But his tomorrows turned out poorly. Ripped from his original time, he's being tested severely two billion years down the time stream. He only wants to protect the shape-shifting teens he rescued from genocide. The Adamant and his evil twin aren't going to make that easy.

After he nearly rescues the teens, Jon slips into a deep funk. All the while, the teens are being probed and tortured by a cruel priestess bent on discovering their transformative secrets. Jon must resort to infiltrating the Adamant ranks in a covert attempt to learn where his precious kids have been taken. The alternate Jon Ryan is becoming more insane and more determined to take the shape-shifters for his own dark purposes. A magical galactic dragon volunteers to take the teens under her wing and teach them. But can the Adamant or either Jon let them go?

The Fires of Hell, book four:

As the unstoppable Adamant war machine stomps across the galaxy, Jon and the teens must part ways again. This time, it may be for good. They must learn the ways of their lost race. Jon must find a way to stop the loss of more civilizations and more innocent lives. He must perform an impossible task. But to enlist the help of a malevolent spirit who can do the impossible, Jon must pay the ultimate price. He agrees to his eternal torment in exchange for the chance to deal the Adamant a death-blow.

Jon Ryan must dig into a very dark side of his personality he wishes wasn't there. He knows he must call upon it. But he's acutely aware that if he dances too close to the cliff, he may fall into the pit of hopeless despair. Jon is on the razor's edge trying to justify his rash act in order to speed the downfall of the brutal Adamant advance. But what price is just too much to pay?

What listeners say about Galaxy on Fire: Publisher's Pack 2

it did not disappoint at all throughly enjoyed it

I really enjoyed both books and have to say that listening stopped me from doing other things that needed voice or sound. looking forward to the next book

This author is becoming tiresome and a lazy writer

I'm not going to spend too much time describing what I thought of this book but it just seems like this author is under contract to turn out a certain amount of output in a short contract period. I can't believe this is the same author that created The Forever series as his offerings now are just lazy and repetitive. For example, every time he need information about an adversary he just goes to some alien bar and bumps into a random character that knows exactly what he wants ! Come on, we deserve better if we're going to use our valuable credits on this pulp

Enjoying every step of Jon’s story

I’m really enjoying Jon’s story right from the first book until now , the Al v Jon banter is repetitive to some from reading others reviews but to me it’s like the author has taken you along for the ride inside the ship , between missions what rose would Jon do another then chat to Al. Great book set can’t wait for the next one

I seem to have listened to a lot of space adventures with galaxy in the title... this is definitely one of the better ones. The narration is pretty good. Only a couple of mispronunciations (don’t know why they annoy me so much). The main character is pretty likeable and funny (if you like a less crass Deadpool) and the whole premise work pretty well.

First to the writer: Please 'move on' the Al/John dynamic if there are to be any more books, it's the only element that not only do I not find funny in the least many times but drives me to teeth grinding thoughts of page skipping! I quit reading the other Craig's Expeditionary output because the of the same irritatingly endlessly repetitive one up manship and cruel humour. The Al a.i. situation got "100%" worse quickly and just kept going down and down, as every sentence uttered was a fruitless jibe, a joke amongst intimates at best, that in life and literature 3rd parties always either, never get or quickly get tired of . I kept wishing John would go back to GB and live without the fancy drive just to escape the whole 'scene'. It's like reading social media trolls at play.

Despite that I do continue to enjoy the audiobooks, and the characters and plots.
Looking forward to the next book throughly, actually I hope for many more to come if the series can keep the quality and engagement.
Great narration, though some sameness in supporting characters now and again, that could be partly the writing which imparts a singular flavour of humour to all characters dialogue.
The character of John Ryan has the gift, because of his immortality, to 'leap' time and place, thus can arch across many a new story series to come, after the conclusion of his current adventure. I will certainly be hitching a ride to enjoy John's company when the next books appear! Can't wait!

the story is not as good as it's previous book

this chapter in John Ryan's story is probably the most bland so far. it feels like the author ran out of ideas and was just filling chapters for the sake of it

I like the narration but the characters annoyed me at how stupid mistakes are made at every confrontation. john is supposed to be a legendary figure but he acts without any plans then dwells is self pity when he fails. It is funny at times and I think the narrator did an excellent job. John's repeated failure is annoying.

John Ryan for the future!!! please bring out the next in the series faster please!

The Galaxy on Fire series up to this point is really good. The characters are interesting. The books are not written like normal books. It's more like TV show episodes, where the end of most books end in a cliff hanger. On anther note you might want to check out The Forever Series 1st as takes place before this series.

Keep them coming please. I keep looking for updates but find none so far.

Great book but ends on a cliffhanger

This continues a great series, but it "ends" on a cliffhanger. I really hate that part - would have been 5 stars otherwise.

I really enjoyed this book. Usually I have a fairly set schedule for what hours I listen to books - with this series I found myself making more time to listen. It’s well written, an intriguing plot, excellent dialogue and Scott Aiello does a marvelous job of bringing it to life.

So strange and familiar is John Ryan.

in another reality John could work at or run a call center. 👍🤪😎 definitely 👍

The longer the story goes, the better it gets. while it does take getting used to, once you put the time in, it's worth the time.

loved this book, it was so stupid it was clever and I mean that in the best way possible.