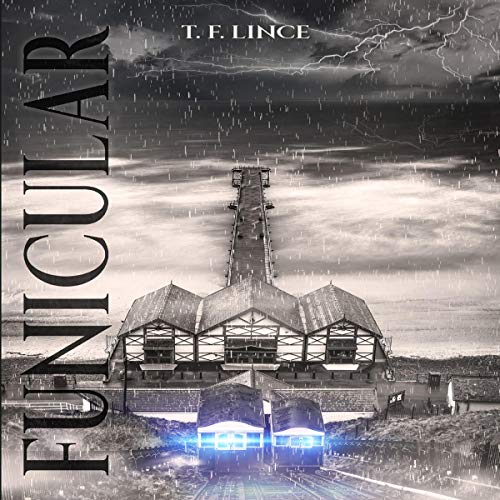 Funicular: What Is Truth When the Past Is a Lie?

A detective mystery with strange supernatural elements allowing not even the past to be trusted, full of intrigue and mystery, an urban fantasy, a crime thriller that will mess with your mind. Not your run of the mill police procedural.

After his life is threatened, DI Bob Dixon leaves London hoping for the quiet life in the northern village of Saltburn-by-the-Sea. But when he takes on the case of young Lizzy Scraggs, missing since a huge tide hit Saltburn six years earlier, he embarks on an investigation that will push him to the very edge of reason.

Out on the beat, Bob learns the legend of the funicular car that left the top of Saltburn’s famous cliff lift many years ago carrying two passengers, and arrived at the bottom empty save for an abandoned ticket. And every big tide since has seen another local child disappear.

Feeling increasingly manipulated by a shadowy nemesis, Bob struggles to make sense of the seemingly impossible clues before him. How can the dead live again? Who is the tortured man haunting the churchyard in nearby Marske? And with the next massive tide just hours away, can Bob solve the puzzle and bring an end to the tragedy of Saltburn’s missing children?

What listeners say about Funicular: What Is Truth When the Past Is a Lie?

I struggled to finish this book - bit confused with the plot as it developed, didn't understand it all even at the end.

Quiet a different listen to what I usually listen to, started off great but about halfway through it started to get a bit strange and the end was quite blunt more on the supernatural ending but have listen to some books that might just border on the edge of the supernatural but is feasible but this one no! definitely not. I was given this as a free download so I'm not complaining but reading the other reviews I clearly differ but we are not all the same and if you feel like it's your style of book then by no means have a listen.

This would have been a great thriller even without the freaky twist! Very good and I really enjoyed the narration.

This would be a good book to read, really enjoyed the story.....
The problem with this audio book is the terrible narration, like a Parent reading out a detective story to a child at bedtime. The audio is also effected by hearing the narrator keep breathing in before trying to rush out the next sentence. Struggled listening to this and only the good story that meant I finished it. With a different narrator this would be a really good audio book.

Set in my native north east England I enjoyed this. The characterisations were always highly engaging.

Excellent book especially if you know the Saltburn-by-the-Sea area. Enjoyed the mystery storyline.

Just buy it and enjoy!

Another masterpiece from Trevor Lince!

I'd been looking forward to this since I listened to Room 119 and I wasn't disappointed. The main character is well developed and the plot is exciting and full of twists and turns. The sort of book where I give loud gasps at certain points in the story. I only do that when I am fully invested in the characters and their lives.

Room 119 is till my favourite but this comes a close second. The narrator, Jade McLean, is skillful and brings the story to life.

Easily a 5 star listen. I can wholeheartedly recommend it.

Firstly I enjoyed the narrators style, her voice was easy on the ears and she made the story come alive with her different voices for each character. the story has an unexpected supermatural element to it, which I didnt expect but it kind of grabbed my attention being a sci-fi geek myself. The characters were likeable and believable despite the unearthly plot in parts. some of it was a bit far fetched. especially the porcelain pigs and blue glowing special items, it's definitely not a vera or midsummer murder mystery, I guess if you like the supernatural and a story that gives you a bit of a mysterious ethereal escapism in what appears your average sleepy Victorian seaside town to begin with, mixed with earthy northern humour it's a good read (or listen in my case) I really enjoyed the story and for an audio book I finished it in double quick time. overall it kept me interested and entertained,just dont take it too seriously. id definitely reccomend the book overall.

This is my first audio book by t.f. lince & jade McLean it's very good i give it 5 out of 5

This is a very cool detective mystery with supernatural elaments tossed in.I enjoyed it! Jade McLean was a fine narrator. I was given this book by the narrator,author or publisher free for an honest review.

Alright, I started this off feeling pretty straight forward about this story. Interesting name and setting. Ok ok. But then we start pushing through the weeds and getting to the bones of the story and holy cow! What a unique tale. I don't think I've heard of a story quite like it. Most mysteries and many thrillers feel sort of copycat-ish of some story or another. But not this one. I can't think of a single story that felt similar.

Nearly retired DI Bob Dixon, moves to this sleepy little town Saltburn-by-the-sea. He's there to run out his term for a mellow final stretch before he retires. The local police take a bit of time warming up to Bob but he endears himself to the force easy enough after some kindness extended to a newer recruit, Higgins. Bob decides to zero in on an 6yr old cold case of the missing child, Lizzie Scraggs, since there doesn't appear to be much else going on in the village.

Taking Higgins under his wing, Bob takes a twisty turny jump down the rabbit hole trying to get to the bottom of this case. Your run of the mill criminal mystery turns on its head and this story becomes something right out of the twilight zone with plenty of supernatural events.

The legendary cliff lift (the Funicular) becomes the center point for the weird events in the story. What's up? What's down? What's truth? What's lies? Who's behind it all? All answered and all a total shocker. A few times you're left scratching your head in wonder of what just happened. The story covered a few decades as Bob's revelations unfold. A few of those decades occurring in the past making Bob question his sanity and grip on reality.

The narrator was brilliant and executed all the voices beautifully. I wasn't left cringing when she ran through the men's dialogues she was that smooth.

After reading a few other reviews, I'm beginning to see that I'm missing out on other unique works by this author. I'd definitely recommend this story and plan to check him out further.

This is a fun listen, I enjoyed the story and the narrator did a great job.

An unique and very exciting story

This was such an interesting story. I don't like to give spoilers so I will have to be careful! Bob is a detective from London, moving to a slower community to ride out his days. With nothing much to do, he begins investigating an old cold case missing person. What he finds is mind boggling. Things he can't believe even though he witnessed it first hand with his own eyes and ears. But did he? Soon, the facts are changing. He really is wondering if he's gone completely mad! The deeper he gets in the case, the mystery deepens. He has a few people that he trusts, some even know or have experienced some of what Bob has. Together they work to solve a large number of missing persons cases. How are they all connected? Can he trust his thoughts? Can they figure it all out before it's too late!?

I listened to this nonstop. Missed my bedtime even! I was so intrigued and simply could not stop until I got to know what in the heck was going on! I felt so connected with Bob, I felt like I was the one losing my mind! I thought the narrator did a fantastic job throughout the book. I highly recommend reading or listening to this book! Loved it so much, I just ordered the paperback! Happy Reading!

I liked it. The narrator was great. The story was unique. I really thought the main character was going crazy and so did he. But then he wasn’t and it all came together. Good story.

This is a book that needs concentration. There are lots of clues and changes that stump the reader. It has an unexpected ending, but an enjoyable story!
Thank you to the author and narrator.

I really enjoyed this story

This is even better than the last one I read by TF Lince! I enjoyed the story so much, I think I listened to this in 2.5 days - I was intrigued and I didn't want to 'put it down' so to speak 🤪 I'm going to be thinking about it for the rest of the day, I think I might even listen to it again because I think I'll catch more tiny hints now that I know what happens. Very difficult to write a good review and also not have any spoilers!

I can't recommend this book enough. Such a mind bender. I loved every second. i hot a bit confused, but then it all lined up at the end. This is a really creative and imaginative story. read this!

What is truth when the past is lie

The book is all about truth and lies and veey confusing because I never got to understand where the line between truth and lies was in this book. Did not get the gist of the story

Once again Trevor Lince has left me gasping, and wanting more story. Funicular has more twists and turns than a fairground rollercoaster, and leaves you feeling like you've ridden the biggest, twistiest one there is at the end. Check science at the door as DI Dixon and cast take you on a supernatural whodunnit rescue mission of missing children taken during storm tides every 6 years. Wonderfully creepy.

I enjoyed the story with good twists and turns. The descriptions of the town, characters, funicular made you feel part of the story.
Narration was good