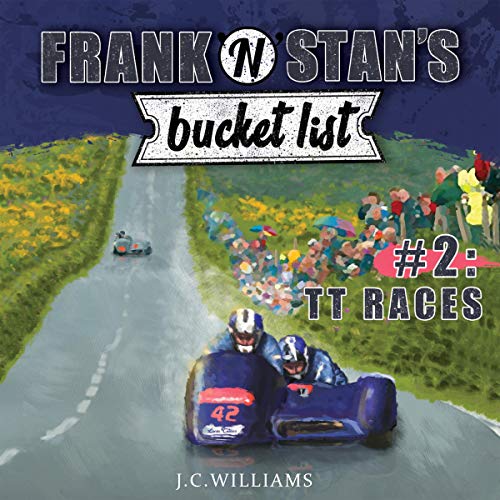 The hilarious sequel to the feel-good smash hit comedy.

Bucket list item number one for Frank and his oldest friend, Stan, was the TT Races. They did it, and loved it so much, that now they’re heading back for item number two on the list - TT Races yet again!

The fledgeling race team they’d cobbled together on their first outing - despite moments of definite glory - didn’t exactly thrive. But, despite this, they’ve once again secured the trusty services of Dave and Monty - the two most out of shape, yet passionate and dedicated, racers in the paddock - and they’re optimistically eyeing a top 10 finish. With his unhappy marriage and wallet-draining ex-wife now firmly in the past, Frank is ready for a positive change - time and health permitting. Life in the glorious Isle of Man has rejuvenated him, and he’s now eager, in fact, to make it his home.

But he’s not going anywhere unless his mate Stan’s coming, too!

Again the Narration spoils it

Not as good as the first and the narrator really grates. The so called jokes are not funny either.

fantastic listening funny from start to finish can't wait to get the next book brilliant!.

great story looking forward to the next one , jc williams realy puts out great characters .

After reading book 1 and thoroughly enjoying it
I had next to no time to sit and read book 2, so I bought the Audio. Another good story but the narration and audio characters were very weak and spoilt the book for me. I will read book 3 and not suffer the pain of poor accents and lack of comic timing.

I thoroughly enjoyed the 1st one. 2nd installment is fantastic. Cant wait for the 3rd book.