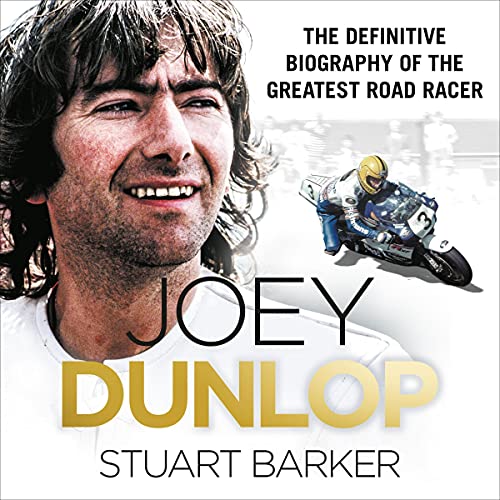 By: Stuart Barker
Narrated by: Jonathan Keeble
Try for £0.00

With a foreword by Carl Fogarty.

Joey Dunlop's story is one of towering triumphs and desperate tragedies in almost equal measure.

Born poor - dirt poor - with no running water, no electricity, he was the definition of the everyman hero, earning the title 'King of the Roads' in what must be considered one of the world's most extreme sports - motorcycle road racing. And as well as being voted Northern Ireland's greatest ever sportsman, he remains the most loved and most successful road racer of all time.

Joey Dunlop won the hearts and minds of millions during his 31-year career, culminating in his greatest triumph in the year 2000 at the Isle of Man TT when, grey-haired, bespectacled and approaching 50 years of age, he reclaimed his reputation as the greatest TT rider in history by defeating a whole new generation of talent and regaining the F1 crown for the first time in 12 years.

But in road racing, tragedy is never very far away. Joey lost his life in a racing accident in July of 2000. It was just weeks after his final TT victory. More than 60,000 people attended Joey's funeral. Over 20 years after his untimely death, the sport has never truly recovered from his loss.

Everyone with an interest in motorcycling knows the legend of Joey Dunlop, but now, for the first time, they can get to know the man himself. This definitive new biography is the most comprehensive ever written on the man. In turns hilarious, triumphant and tragic, this is Dunlop's story as it has never been told before - by those who were part of it.

What listeners say about Joey Dunlop

You can never have too many Joey stories!

Well written biography. Joey the legendary road racer lives on in text. His personality is thoroughly revealed a most for any fan new or old

a fantastic book about a true legend

If I could give it six stars...

Seriously the best biography I have listened to in a long time, and I have consumed loads from the usual suspects: sportsmen and women, comedians, artists, musicians, naturalists, polar adventurers, etc. This story just blows them all away. Joey Dunlop was famously shy and avoided the spotlight so even though I followed him as a road racing fan throughout the 80s and 90s I knew precious little about him. This is Joey's story told through the people that did know him and it shines with love and integrity. I was moved almost to tears on several ocasions. As the author himself says on a couple of occasions, some of the events in Joey and his brother Robert's lives were beyond anything Hollywood could make up. True grit. True heroes. The best of role models. No wonder the Irish revered them. And Stuart Barker did them proud.

A word about the narration: I can appreciate Jonathan Keeble's Irish accents might sound wonky to a native's ears but they sounded absolutely fine to me. I was able to distinguish all the various people who were quoted, whether Irish, Scottish, English, Welsh or Dutch, from Grant to Rutter to Marshall to Dunlop to Tuxworth to yadda yadda yadda, and that's the important thing, isn't it?

If you have any interest in motorcycle racing, listen to this. I'd give it six stars all round if I could.

what a man.. a legend in his own right

a wonderful look into Joey Dunlop and his family life..thank you for a look in the window to his life.

I'm sure Jonathan Keeble is a great narrator in the other titles he has read however, in this one, not so much.

The producers should have had someone from Northern Ireland narrate Joey's quotes and another for other NI people who were in his life, not Jonathan, or adapted the book such that multiple accents were not needed. Unfortunately it was too far a stretch for him and it has ruined it for me. I don't think I can even finish listening to it if I'm honest.
It's a real disappointment given who the book is about. It really doesn't do Joey justice...

Must listen for those who love racing

Being an American, I found the TT when I was younger, and much like Joey, fell in love with the TT circuit and Irish road racing.

This book chronicles the amazing journey Joey took with motorbikes through historical accounts and excerpts from those who know him best.

A family that has given so much

loved it could hardly finish it. most people will never understand why someone would road race motorcycles. The never will