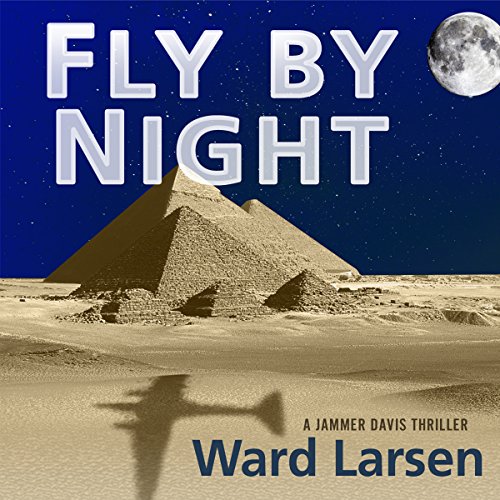 A top-secret drone crashes in the lawless Horn of Africa. The CIA is prepared to write off the loss, until evidence surfaces that the wreckage of their prized aircraft is hidden in a hangar outside Khartoum's main airport. The hangar is owned by a shady cargo airline that flies ancient DC-3s across Africa and the Middle East. The name of the company does nothing to still concern: FBN-Fly by Night Aviation. The U.S. government must find out what is in the hangar, and when an FBN airplane crashes, the opportunity arises for the National Transportation Safety Board to send an investigator to get to the bottom of things.

Jammer Davis is the NTSB's biggest headache, but also its best solo operator. He goes to Sudan in the name of solving an air crash, but with the true aim of locating the priceless remains of America's latest techno-logical marvel.

As Davis enters this inhospitable world, he finds the two disparate mysteries strangely intertwined. True to his nature, Davis barges ahead. Yet everything he finds takes him in reverse.

What listeners say about Fly by Night

Although this book is a fiction the story is backed up by professional background of the author and therefore very exciting and interesting due to many aviation related details. I enjoyed it a lot.

The story is simple and interesting, joined to the beautiful, detailed descriptions of the technical aspects of every event, reading is pure joy and listening to the clear, expressive vocal narration makes the book as pleasant as a joy ride flight to a heavenly destination. Thank you for a wonderful book.

Hard to put this book down.

Excellent story line, and because I like audio books I thought Tim Campbell was a very special narrator. This is my second book by Ward Larsen and I look forward to future books. Especially if Tim is the narrator.

I enjoyed this, but was often put off by the voice. At times there would be this awkward "he said" as if added later. The voice inflection at times was distracting. That said, it was a good story. I enjoyed some of the details. Having been a diver years ago I was a bit skeptical that Davis could go down 50 feet and scout a sunken C-47 (DC-3) on the bottom of a sea. That is fiction, I guess.

Did Tim Campbell do a good job differentiating all the characters? How?

The author has written another fantastic novel!

The author has written another superb novel, full of intrigue and suspense! The narration is superb, bringing the characters to life!

Jammer is quickly becoming a favorite. Needs a bit more confidence, more daring. is he ever going to fly a bird he has some stick time in?

quite interesting and exciting!

I love when the old-school way of doing things is the only way to get the job done! Old pilots, old planes, lots of technical flying details (I'll just assume he knows what he's talking about). A conspiracy and a coup. A handsome accident inspector and a beautiful (of course) doctor. Very interesting listen all the way through.

The narrator's accents are quite good. His delivery is sometimes drab, but it still kept things going.

This was great. I listened first to Fly By Wire. Also an excellent listen. Then went on to this one. Jammer Davis is a great hero figure. Great recreation listening.

this was a really good book, that moved at a fast pace and had new things happening all of the time. I love books on planes. Love air disaster ones too. This was made for me. The other 2 books in the series are just as good

The book took until the last 8 chapters to get my attn. I had to make myself push through. Too much time was spent in the "investigation" which contributed neither important back story or material to capture interest. Main character was 2-demensional at best.