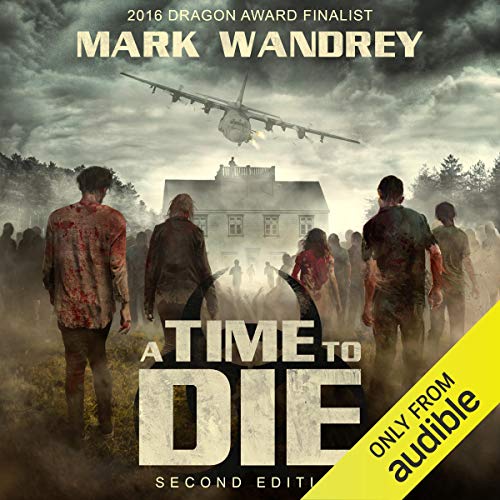 A Time to Die

By: Mark Wandrey
Narrated by: Craig Good
Try for £0.00

They came from the night sky, lighting the heavens like the promise of salvation. But they didn't bring deliverance.... They brought something far, far worse. Something that turns people into mindless, cannibalistic monsters. And it's spreading.

A reporter follows her story of unspeakable horror south of the border and finds it's worse than she imagined.

A wounded fighter pilot finally gets his chance to return to duty but is faced with a mission that could cost him his wings, or his country its chance.

A billionaire with dreams of space finds a crashed alien spacecraft unlike anything mankind has ever seen.

A brilliant geneticist conducting outlawed research comes face-to-face with the nightmare consuming the world faster than anyone can comprehend...or stop in time.

The government can't contain it. The military can't fight it. This is A Time to Die.

What listeners say about A Time to Die

I got this as a freebie from a freeaudiobookcodes.com in exchange for a honest review.
I really enjoyed this book. An interesting take on the Zombie/Alien genre, though technically they're not zombies.
Good plot development, with likeable characters.
Lots of action, not a lot of guts and gore though. Which for me is a minus. For those a bit more squeamish this is a great listen.
Looking forward to listening to book 2 as soon as I've posted this.

This book came as a surprise to me as I'd never heard of the author and it was so good! Highly enjoyable from start to finish. Some different elements from the run of the mill zombie apocalypse books. Highly recommended!

Alien virus twist to the ZA.

A virus is rapidly spreading across the country; its origin and composition are a complete mystery. Researchers and scientists alike are baffled with the test results as they struggle to discover what this virus is, where it came from, and why it acts as it does. What they do know is that both animal and human are transformed into raging, flesh-eating monsters, aka zombies when exposed to the virus. The story rotates through several sub-plots of survivors dealing with the infection according to their background and specialty. We follow Lt. Andrew “Switchblade” Tobin the fighter pilot asked to perform an illegal mission that may forfeit his career, Dr. Leesha Breda the geneticist overseeing an illegal biomedical project on an abandoned oil rig in international waters, Cathy Clifford the independent reporter who follows an unbelievable story, and Jeremiah Osborn the wealthy entrepreneur who, while looking for meteor fragments for NASA, comes face-to-face with the virus and its mysterious host. The characters are well-developed and each contributes to the advancement of the storyline. The brief relationship between Cobb and Cathy was a breath of fresh air and reinvigorated the story. I enjoyed this tale quite a bit and look forward to more from Mr. Wandrey.

I'm a working mum with two small kids and my guilty secret is an addiction to listening to zombie apocalypse books on my phone. Listening to them makes the ho hum mundane tedium of chores around the house a little easier. I've read so many and nearly didn't purchase this based on some of the reviews. I'm super glad i did, i found it a refreshing story line in a genre now filled with tired cliches. I also loved that there isn't excessive gratuitous gore and violence - enough to keep it realistic. And characters also don't make repeated dumb decisions and actions. As soon as i finished this i purchased extra credits for book number 2.

I have never read Mark Wandry before. but I have to say it is always a treat when somebody comes up with an original idea in the zombie genre. ca my wait for book 2!

There are a few unique twists in this Zombie book. These twists and the good character development make this a barely above average zombie book. There is plenty of action which helps propel the book along. However, the book seems somewhat choppy, bouncing from one situation and setting to the next. Also, some of the dialogue was poor and not very realistic. And even though the characters were somewhat well developed, i didn’t care for any of them that much.

The narrator was good, but nothing awesome.

Great twist on a ZA enjoyed it a great deal. A view of how the government might try to protect us from the truth.

zombies don't work for me.

The premise is not to my liking but the execution was great. Had it been advertised as a "zombie book" I'd not bought it. however, I did and I'm glad that I did!

Great book! Great series and I am hoping there will be more to this story! Loved everything ! Narration was fantastic.. couldn't ask for a better story!

I think the story had potential, but the narrator wasn't for me. I thought he had a nice baritone voice, but i feel he didn't put enough emotion into this reading. I would listen to this narrator in other genres.

Best Zombie book I have read in awhile.

I love how the author approaches the same Zompocalypse from different angles. the voice actor also did a great job. I bought the second book during the epilogue so I don't have to wait to find out what happens to the characters I have grown attached to.