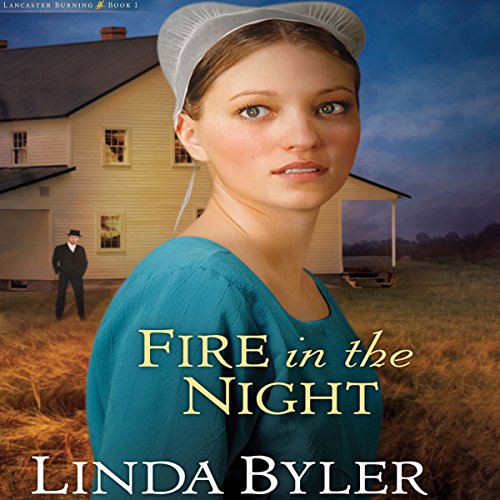 Fire in the Night

One barn fire might be an accident, the Lancaster County Amish community believes. But two barns burning just weeks apart is suspicious. Sarah Beiler wants to protect her family, even though they don't like Matthew, her new boyfriend. Book one in Amish author Lydia Byler's series Lancaster Burning.

The Amish community of Lancaster is being terrorized by barn fires. David and Malinda Beiler's barn was the first to go. The clues are sparse, but Levi, the Beilers' oldest son, happened to be awake in the middle of the night and spotted a white vehicle driving past the house with its lights off. Sarah, David and Malinda's daughter, observes her parents' agony. Not only is she afraid and wishing she could protect her parents, she's entranced by the flirtatious Matthew Stoltzfus. He's dating her friend, Rose, but when he tenderly bandages Sarah's hand after she burned it at the barn raising, she wonders who he's really interested in. When a second Amish barn burns for suspicious reasons, the Amish grow more restless. "We're too quiet too much of the time," a group of Amish men tell David Beiler, their minister. Seriously considering police protection, the increasingly tense community questions their traditional, nonresistant approach to violence. Sarah now finds herself at odds with her mother over her choice of boyfriends and uncertain about how to respond to the attention of Lee, a newcomer to Lancaster. Not only that, she wonders if her dad is a wise enough leader, as her community reels from within and without. Everyone is on edge, as the losses mount and suspicions undo the usual steadiness of these people.

What listeners say about Fire in the Night

It was always sad, was way to long for as many things that happen, and the narrator was terrible.

this book reeled me in easily but it seems so unfinished and I have so many questions...

I write uplifting blogs to help people up and help them cope through tragedy with God’s loving care. I cannot finish this book. Tragedy after tragedy without a ray of hope becomes intolerable.

This was an awful book just listening to it could give a person PTSD. I kept expecting for something wonderful to happen to this family but it never did. Then the book ended without anything being solved. Very disappointed truly a waste of time.

Narrator is good, however, having lived all my life just 20 miles from Lancaster County, PA, it would be nice if the word "Lancaster" was pronounced as it is here, as with other local words.

Great story fun characters. Loose ends definitely need to be tied up for sure. Leave me hanging why don’t ya.

Fascinating novel set in the Amish culture of Lancaster County

The author crafts a story of the everyday life, the pain of sudden loss, family and church community relationships, unrequited young love, and forgiveness. The Sarah/Matthew dynamic feels a bit overplayed, but they are young! The depth of character development of Sarah’s family, including her father’s role as the pastor for their church, is a beautiful picture of love and forgiveness as their family struggles deeply, but continue to pull together to go on & find joy in the mundane tasks and hard work of Amish life.
The narrator is really good and her voice fits the story.
Unfortunately, much is left unresolved at the end of this book—which is actually a series of 3 books. Very disappointed that my “audible plus” membership does not include book 2–but it does include book 3. What’s with that??
Audible Plus membership once more a disappointment.

the ending was horrible.
the whole book struggled from start to finish.
poorly written

I wasn't sure in the beginning. I grew to love it

it was a little slow in the beginning. But I grew to love the characters and the story. it was pretty sad though.

struggled to find storyline. not for me for sur. sorry i had to say it