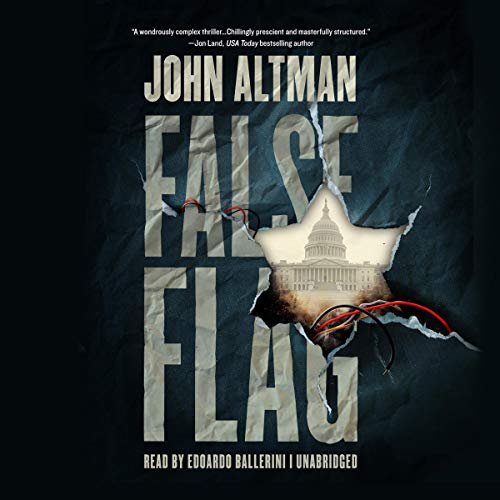 By: John Altman
Narrated by: Edoardo Ballerini
Try for £0.00

In False Flag, Israeli-born Dalia Artzi, a tactical genius and specialist at Princeton in the study of maneuver warfare, uncovers a fiendish plot by a small group of Israeli fanatics to commit a horrific crime against the United States government and pin the blame on Iran. At first Dalia, a pacifist, is hesitant to get involved. But, strong in her Jewish faith, she believes that the goal of her religion is not to crush one's enemies but to practice tikkun olam, to repair the world. Soon Dalia has little choice but to act quickly and do what she must to prevent the unspeakable.

Meanwhile, Jana, a beautiful but deadly Israeli operative taking orders from the conspiring fanatics, is determined to deftly fulfill the deadly mission entrusted to her. Once the plot has been carried out, Jana and the commanders of her mission believe that Israel's enemies will meet with total destruction when the world's most powerful nation retaliates. Jana is firm in her conviction that she is on the side of right and believes the ends will justify the means, however violent.

Centered on a fascinating and original Israeli heroine and antiheroine, False Flag probes some of the most important political and moral conflicts of our times. Altman examines extremism in its many incarnations and the complex pitfalls humans encounter when they try to do what is right, no matter the cost. In the process, he continues his tradition of creating ruthless female assassins, delivering his most terrifying creation yet. Riveting espionage, struggles of conscience, and edge-of-your-seat intrigue combine to make False Flag one of the most compelling and controversial thrillers of 2017.

What listeners say about False Flag

I tried. With only 3+ hours left I was over half done. I just couldn't finish it. Characters were blah and I didn't care if they all died at once.

It was like watching the Trump/Biden debate without the snarky comments, the moderator repeating "2 minutes" over and over, the sarcasm, the fly or even a color TV.

Ballerini is a great narrator - one of my preferred ones in fact - but even he can't save this meandering, boring storyline. When I have to rewind multiple times because I got distracted or simply lost the plot, it is a clear sign that something is wrong. With this audiobook it is exactly like that, Altman just seems to ramble on but the characters never come to live and so does the story. Abandoned at half-time.

It appeared it would be a good spy/action story. I couldn't finish it...slow and ploding...performance was meh as well...not recommended.

Just could not get into it. Could not follow the plot if there was one.

Got less than two hours left

I forced myself to listen but just don’t care how it ends I believe I would return this book. Not something I do lightly
But just going to delete from library

Couldn’t finish. Tried for an hour. But don’t want a political lecture. Hardly a fictional mystery, but a social diatribe.

Another author educated, and in good command of word usage but used this wonderful ability to present a story as if uneducated and limited in ability to communicate, resorting to defiling, uncivilized language. If one enjoys being entertained by gutter words, here you are.

Not a good listen

Could have been a good story but there were endless minutia details that were so frustrating to listen to. Only a few places where the story was interesting. Very disappointed.

Got WAY to much into the poor poor Israel psychy. Long rants on big bad America

Good story but WAY too slow

A good story but with far too much irrelevant filler. I found myself frequently frustrated with too many character memories and too much detail of environment. Context and character development is great, but I found it unbalanced and conflicting with the pace of the book. There were good “edge of the seat” moments which could have been great, but instead there were long interruptions of boredom. The author has a pacing problem. I hope he will continue to work at his art because he could be quite good.