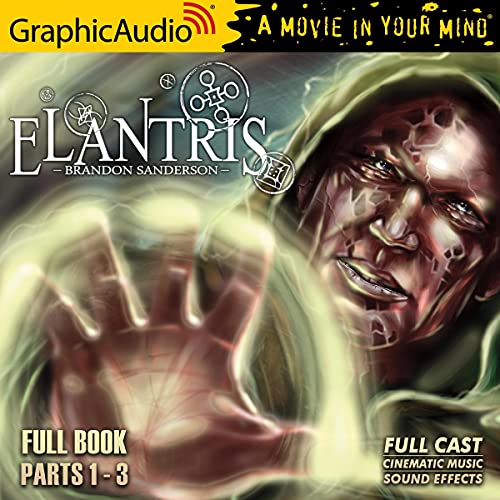 The city of the gods. Elantris once stood as the symbol of all that is beautiful. A sprawling metropolis of unrivaled grandeur, it was a symbol of power and strength, built to be as imposing as it was magnificent.

The only thing more glorious than the city itself was its inhabitants, godlike beings, with silvery skin and hair of the purest, flowing white. Able to create powerful magics with a mere wave of their hands, the Elantrians were able to heal mortal wounds and create any object they desired. To be an Elantrian was to be without sickness, without pain, and without want.

And anyone could become a god. Through a process known as the "Shaod", a normal person could go to bed one night and awake the next morning to throw away the shackles of mortality and become a being of incomparable power and grace. With Elantris as their beacon, the light inside all humanity was allowed to shine, elevating it to new heights.

Enjoyable way to hear the story

The story itself is not the best work by Brandon Sanderson but is still well done. This is especially true when taking into account that this is his first published novel. The magic system and description of the process of using magic was probably the best part. Some of the characters are simplistic, but charming in a fairy tale archetype sort of way.

The production reminds me of watching television as a child. It can be corny and over the top, but the actors embody the characters. Some of the chosen voices can be grating or overdone, but that is part of the fun. It did influence my view and thoughts on characters at times. Probably not the most pure way to absorb the material. The shorter length of the production compared to the regular audiobook was also a plus for me. From what I have read sentence filler is mostly cut out.

Overall I enjoyed this way of hearing the story, and will be listening to Warbreaker next!

PS - Cosmere completists, there is a scene featuring a familiar character at the end of the 10th anniversary edition that is not included in this version. I ended up reading it separately.

Characters are one dimensional, plot is contrived and simplistic, but the vocal performances bring the story alive and give each character more depth than they would normally have had.

I love Brandon Sanderson's books! The one complaint I have is that his books are SOO long. This was a great way to hear the story and still get tasks of daily living accomplished.

Brandon is a genius

huge fan of Brandon and the whole Cosmere. Elantris is no exception. a beautiful story of perseverance, and discovery. also a zombie novel, which is cool.

Wonderfully performed. I enjoyed the characterization. The idea of a godly city condemned was a great idea.