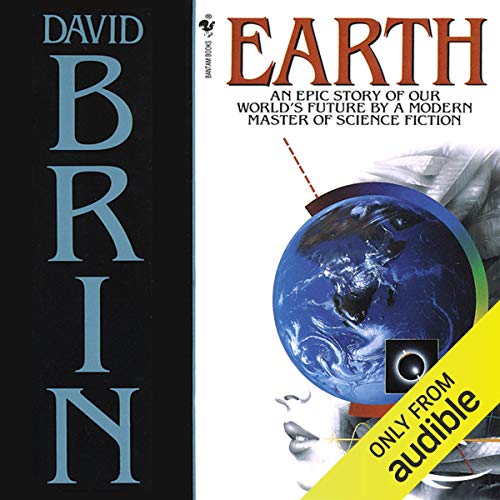 By: David Brin
Narrated by: David DeVries,Kristin Kalbli
Try for £0.00

The long-awaited new novel by the award-winning, best-selling author of Startide Rising and The Uplift War- an epic novel set 50 years from tomorrow, a carefully-reasoned, scientifically faithful tale of the fate of our world.

"One hell of a novel.... has what sci-fi readers want these days; intelligence, action, and an epic scale".( Isaac Asimov's Science Fiction Magazine)
"The prime attraction of Earth is the author's unfailing resourcefulness in extrapolating a post-greenhouse-effect future that is plausible, dismaying, and amazing in equal parts…. Brin's prose ranges from regular to high octant…. His characters have vivid intellectual lives." ( Entertainment Weekly)
"Brin has conceived his story on a supremely ambitious scale, and executed it with all the skills at this command." ( Chicago Sun-Times)

What listeners say about Earth

Such an interesting book, David Brin is awesome.

I really love the way he deals with the big issues of the time with realistic plots, yet is optimistic. His characters can be a bit too wonderful, a bit too exceptional, and he's certainly US-centric. On the whole very thought provoking and inspiring

The narrators are not bad, but I just couldn't get into the story. Stopped listening half way through.

excellent writing and performance, was not aware this is not a recent book. has aged well

Just could not get into it. Tried twice.

This is one of my favourite subjects but this book seems too disjointed and lacks something.

Great read. I think I'll start it again I liked it so much. That was a year ago so it's second time around.

what an amazing prescient and exquisite story!

I have listened to this fascinating book twice now...and it is so filled with thoughtful insights and exciting plotlines I may listen to it annually!

David Brin has grown hugely as an author and storyteller. This book is so much richer than all the typical dystopian novels littering the sci fi landscape I wish everyone could consume this book... as it deliciously depicts the unfolding future on many levels. It will cause you to think and reflect on where we are and where we are headed all wrapped neatly in a mystery filled with intrigue and emotion.

The narrator's are wonderful, adding to the rich depictions and extrapolations which combine to bring this story alive and give any thinking human a reason to pause and reflect on all we are doing and how things might unfold.

while the plotlines are fun and unique, it is the world Brin depicts that is the true beauty of this majestic adventure... do not miss it!

and I must add...absolutely the best endings ever... you get three... all connected and wonderful... the main story, Brian's discussion, and a lovely postscript... each of which it's absolutely marvelous

David has an inside line on the future

What made the experience of listening to Earth the most enjoyable?

The narration was great the characters came alive.

What other book might you compare Earth to and why?

Accelerando by Charles Stross, it's a strong view of a possible future.

I'm just got done re-reading David Brin's "Earth" written in 1989 after a 15 year break to see how well it holds (the Audible version with a nice short story at the end that takes place in the same universe). In some of the sub-plot lines, he talks about the leaders with Swiss bank accounts? Check A world linked by computers and camera's recording everything done by the people? Check. Ice melting? Check. Earthquakes next to the coast taking out nuclear power plant? Check. The cost of connecting to the world wide web dropping to less then the cost of gas and food? Soon. Clearly he has a good inner line on projecting what could go on in the near future, check him out of you're looking for a good read.

This is a great story. Heady sci fi with intense action and drama with the fate of the Earth at stake. Modern readers need to remember that this book originally came out in 1990. Yes it is a bit environmentally preachy but given where the planet is right now in terms of global warming, it’s nice to see SOME people could see the direction things were headed and used their craft to draw attention to the problem 30+ years ago.
The problem I have is with the performances. David DeVries is good and for the most part does an excellent job. Whoever directed him though (assuming he was directed) let him give a New Zealand accent to a clearly American character. The book has shared narration, with the male characters chapters read by DeVries and the female character chapters read by Kristin Kalbli. For the most part the characters don’t overlap but in a few chapters they do. DeVries first encountered the American character in New Zealand so he must’ve assumed she was from there. A clear example of why voice talent should read the script PRIOR to acting the part. Aside from that, he does a fantastic job.
Kristin Kalbli on the other hand, while not the worst reader I’ve heard, still comes across as over articulated and a bit stilted at times. She’s a little too careful to make sure she reads E V E R Y L E T T E R to the point that it’s a bit distracting. Hitting the last consonant a little to hard. Don’T do thaT iT sounds weirD to the ear.
So for performance DeVries gets 4 stars and Kalbli gets 2 - combined average = 3 stars.
The story is a lot of fun and a bit unnerving. Interesting to see how accurate Brin was about some things like email and the internet but completely missed cell phones and the form the internet would take. As if early forums and email was as far as internet technology was going to go. I can forgive that though. I would recommend this book, just arm yourself for some of the disappointing aspects of the voice performance.

Great book, not perfect reading.
A truly remarkable re-imagining of our planet used as a trick to go deep into the theories on how to preserve our dear earth.
I loved it in paper and wanted to listen to it, I was mostly happy about this version too.

long but good it drags at times....the ideas prese

I love David Brin and I am sympathetic to the message but it makes for a super boring and preachy book. Skip this one, its a stinker.

What was most disappointing about David Brin’s story?

I sorry of enjoyed this story, in which an “gravity laser” is invented by an improbable scientist, and of course has weapons potential. Naturally, the then equivalent of the CIA comes after him. A woman astronaut gets involved, dislikes the scientist at first but eventually comes around. And and and.

Brin uses the device of starting each "part" with a series of repeated chapter titles like "Earth," "Space," etc. Many of these are non sequiturs, and confusing.

People fall in love, but nobody shows passion, or any emotion, except jealousy. Sex, of any, is only vaguely hinted at.

The narrators are just barely good enough to tolerate, and their (or the director's?) work interferes with the character development. Several characters voices sound the same. Worst of all, the lead female protagonist has an unattractive man's voice with a strong Kiwi accent. He may have explained why a New Zealander is captain of an American space shuttle, I don't recall, but it has nothing to do with the plot. Weird.

Tying up those loose ends that actually do get tied up takes at least an hour, and is free of either surprises or action.

I'd return this book, but I have a lot of unused credits and Amazon recently started cancelling credits after so many months, which violates the contact I signed up for

David Brin brings the grand planetary perspective to the personable level of characters in a near future world that still feels believable 30 years later.

This is one of my favorite books, and I was pleased to find it unabridged on Audible. Unfortunately, the producers didn’t spring for top tier narration. While the male narrator is adequate, the female seems to have come from the 19th century elocution school that emphasized crisp diction and spit consonants over any emotional content. She couldn’t even be bothered to look up correct pronunciation of much of what she’s reading. I’d rather they just used the male narrator for the whole thing. Still, the book remains a classic. But next time, I’ll go back to the Kindle version.