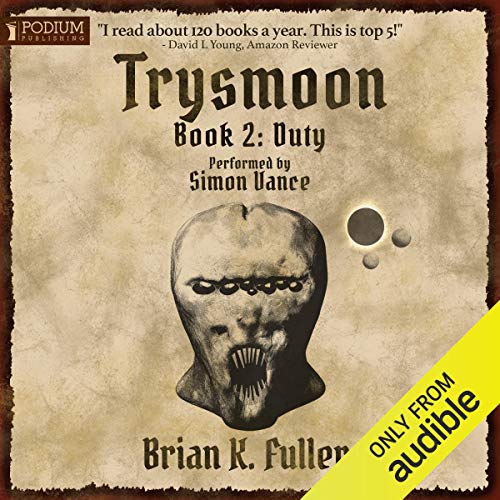 The demon's attack at the betrothal spreads fear and doubt throughout the nations of Ki'hal. But Gen's courage and sacrifice make him a legend and inspiration to the people. As the long, dangerous trip to Elde Luri Mora approaches, the Chalaine must battle her misgivings about the Ha'Ulrich and lean on her faithful Protector for the strength to do what she must to save the world.

As the journey across shards begins, her friendship with Gen deepens with every mile forward, but so does the danger. Intrigue and ruin threaten the caravan at every turn, but the most dangerous war of all is fought within the walls of the Chalaine's heart.

What listeners say about Duty

Not bad, better than a lot of whats out there!

Taking all four books together, its not bad at all, its not a patch on the 1st law, or Demon Cycle, but its better than a lot thats out there. Only issue is the fact it is split into four books, is it really worth four credits? No! if this was one book, even two then I would have been much happier, as it is, its a bit off a rip off!

Cast of characters and places

I enjoyed the whole series, narrated superbly by Simon Vance. He is my favorite narrator. There are weird names for people and places, so below are brief descriptions of the characters in this book, and the setting, but no plot spoilers:

The planet is Ki'Hal. Long ago, this fantastical planet split apart into shards, only accessible via magical portals. The three major shards are also nations: Rhugoth, Tolnor, Aughmere. Planet Ki'Hal has three moons: Trys, Duam, and Myn. Trys is eclipsed. Trys, shown on the cover of each book, is central to the plot. Each moon yields different magical gifts, which can be supposedly used only by skilled mages. The nexus for the power of the god Eldaloth is the moon Trys, and a sacred place on Ki'Hal called Elde Luri Mora. In this book, the characters travel to Elde Luri Mora, crossing several bleak shards to get there. They must perform a wedding ceremony there, in the Temple of the Three Moons.

The main character is an orphan named Gen, a likable bard-turned-warrior, about 19 or 20 years old. When the series begins, he is apprentice to the bard Rafael, in the obscure village of Tell, on the nation-shard of Tolnor. Then he becomes bodyguard to the Chalaine (see below) in Rhugoth. In the previous book, at his village, Gen had a crush on Regina and was best friends with Gant. They are mentioned in this book.

In the prequel, a vicious warlord king from a different nation-shard (Aughmere) invaded the nation-shard Tolnor, and took an interest in Gen. This warlord is Torbrand, the Shadad Khairn, like a tribal warrior Khan, or a sheik. Torbrand loves his daughter Mina. He plays a strong supporting role in this book, Duty.

Then there is the Chalaine, of noble birth, beautiful, kind, and brave, but overwhelmed by the prophecies of her divine destiny. She's about 18 years old. Her best friend and handmaiden, Fenna Fairedale, plays a strong supporting role. They live on the nation-shard Rhugoth.

Together, the Chalaine and the Chertanne (Ha'Ulrich) are prophetically destined to save the world, through their offspring.

The Chelaine's mother Mirelle is called The First Mother. She is also beautiful beyond the norm, but is politically shrewd, ruling in the capital city of Mikmir, on the nation-shard of Rhugoth.

Inside the crystals in an ancient necklace are three teachers from the past, three über-warriors who fight Mikkik's evil: 1) Samian Birchwood, perhaps the kindest one, he's a woodsman (and Maewen's father), 2) Elberen the archer, a wise and knowledgable elf, speaking the old language, and 3) General Telmerran Fourtower, the boldest (and most reckless) of the three.

General Harrick Oggbeth also protects the Chalaine, and helps rule all of Rhugoth. He is one of the regents of Rhugoth, and Kimdan's father. Regent Oggbeth is a contemporary of the First Mother, Mirelle.

Church clerics: High Pontiff Obelard, Mage-priest Ethris, Padra Athan, Aaron the acolyte, Salem the sailor-turned-pureman, etc. They serve the prophecy, and the Church of the One, the murdered god Elderloth. They strive to defeat the god Mikkik and his army of hideous creatures. They also strive to defeat the ilch (ilk), a humanoid sent by Mikkik to destroy the holy couple and their holy child.

The series also includes a few of the Millim Eri, powerful ancient elves, the last of their kind.

There is also the Ash Witch, Joranne. Her sons are the priest-mages Ethris and Kaimas (and one other son barely mentioned in the series). She is cursed to age a lifetime each day, and supposedly serves Mikkik, but is unpredictable.

Simon Vance is the best hands down

This is an engrossing series no doubt. Gen is a bit of a Mary Sue, but that doesn't bother me within this story's context. One thing cannot be denied. Simon Vance is a maestro. I could listen to the worst story narrated by him and love it.

There are four books in “The Trysmoon Saga” series. They are one long story. Be prepared to read them all. The four books in order are Ascension, Duty, Hunted, Sacrifice.

5 stars for Ascension. Exciting wonderful journey following Gen an orphan. The evil local magistrate bullies and harms Gen and others. Warlord Khairn comes to town killing many. Khairn forces Gen to learn to fight. There are magical creatures and healers in this world. It reminds me of Lord of the Rings with a little Harry Potter.

4 stars for books 2 and 3, Duty and Hunted. Still very good as they continue Gen’s story.

3 ½ stars - maybe 4 stars for the last book Sacrifice. There were sooo many battles and journeys. The main characters fight, flee and survive one obstacle, then an emergency happens and they are fighting something else. I was getting a little weary of battle after battle. But the overall story and how it ended was worthwhile. The evil god Mikkik was close to destroying all the good in the world. The epilogue was fun and very feel good.

AUDIOBOOK NARRATOR:
Simon Vance is excellent. And he does females well.

Great story-telling continues in Book 2 of the series. Others have complained this installment was only “filler.” Not so.
Many times, the subsequent books in a series fall flat. Not this time. I felt the story progressed, characters continued to develop, the “world” was expanded, and “the plot thickened,” as they say.
I am eager to dive into book three.

I'm not ok with this.

The story is interesting, but the way this book tries to sell rape as 'duty' and constantly reiterates that women's only real virtues are beauty and innocence makes me want to scream.

The continuation of the Trysmoon Saga is just as thrilling and captivating as its predecessor! Brilliant writing and superb narration. Starting book 3 today!

The story of Gen continues, as he keeps his watch on the Chalaine, who is now traveling to her wedding with the Ha'Ulrich. I found the story interesting as well as the characters, but the overall depth of the story is thin sometimes. While much time is spent on the interactions of Gen and the seeming unending trail of women who fall in love with him, many of the scenes in the book come off shallow. The entourage traveling through an area unseen by man for hundreds of years is barely described, and even though there are encounters with strange evil hordes trying to kill the party, you barely get an idea of who or what these creatures look like.

Overall. I will continue with the story since the books are not overly long and I am interested in the outcome for the characters, but it seems a little more time spent on creating the world around these characters would have made this a much better book. The narration was top notch and makes the stories shortcomings bearable.

A real treat. Great story throughout! It's very easy to get lost in this tale.

This entire series was great. Simon Vance was superb in all of the books in this series.