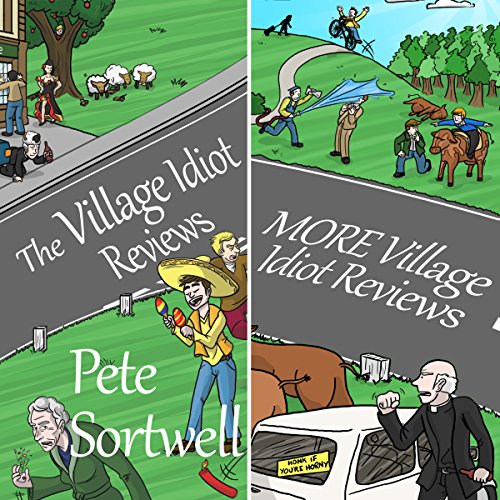 Join Brian as he tries to woo the girl that works in the local shop. Will passing out face down in super glue while trying to make her a gift hinder his chances of getting her to go out with him?

Will Father Frederick, an alcoholic vicar who has a slight issue with stalking, be able to win back the heart of a woman he loved a long time ago?

And will Ethel, who thinks that throwing hard rice instead of confetti in a bridegroom's face is an acceptable form of sport, be able to use her trick to catch one of these two losers as they step out of the church on the happy day?

We guarantee you've never heard a book quite like this before; it's written entirely in the form of product reviews. Hilarious and wholly original, The Village Idiot Reviews pokes gentle fun at the more obscure corners of your favorite e-commerce sites. It introduces the most bonkers set of countryside dwellers since The Vicar of Dibley.

It's been a year since their last outing. Brian, Ethel, and Father Frederick are back with more village idiocy.

Frederick has injured his nipples in a vicious moped accident while on his honeymoon, and he no longer feels like a man. He's taken up the drink again, and is making people's lives a misery with his antics. He can't work out why strange men keep following him while he's out drunk-driving, though.

Brian's concentrating on getting through married life while trying to find a hobby that doesn't hurt. His cousin Jeff, from The Office Idiot Reviews, has moved in for the summer and is on hand to help Brian with his assertiveness when he is bullied by the local biker, Jock.

I have read two other books by this author, both of which at times were very very funny.
This book was not.
Despite being written in a review style and each snippet being only minutes long, not one single excerpt was in any way amusing.
Not one.
I persevered because the book was short and surely one review must be funny.
I was wrong.
Truly awful, please don't purchase.