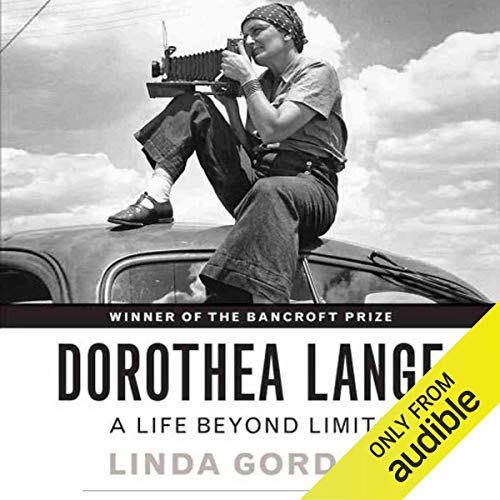 By: Linda Gordon
Narrated by: Kathleen Gati
Try for £0.00

Winner of the 2010 Bancroft Prize and finalist for the 2009 Los Angeles Times Book Prize in Biography: The definitive biography of a heroic chronicler of America's Depression and one of the 20th century's greatest photographers.

We all know Dorothea Lange's iconic photos - the Migrant Mother holding her child, the shoeless children of the Dust Bowl - but now renowned American historian Linda Gordon brings them to three-dimensional life in this groundbreaking exploration of Lange's transformation into a documentarist. Using Lange's life to anchor a moving social history of 20th-century America, Gordon masterfully re-creates bohemian San Francisco, the Depression, and the Japanese-American internment camps. Gordon has written a sparkling, fast-moving story that testifies to her status as one of the most gifted historians of our time.

What listeners say about Dorothea Lange

Five stars for Linda Gordon's writing and the rich historical setting she provides, always going into valuable depth about the background, causes, economic factors, prejudices, and prevailing movements that influenced Dorothea Lange's life. Kathleen Gati's narration, however, is atrocious. She repeatedly commits two of the gravest sins of audiobook narration. First, she routinely butchers pronunciations--far more than I could keep track of but many cringe-worthily bad (James Aggy, not AY-gee, Modest-OH, not MOH-desto) and some simply jaw-droppingly bad (at least once &quot;photography&quot; comes out &quot;photoGRAPH-ee&quot;). Second, it quickly becomes obvious that her first reading of the text is the one that got recorded, because many times her intonation drops, as if she thought the end of a line of text was also the end of a sentence--only to sudden pick up again as she discovers there's more left on the following line. Don't let the sample fool you--much audible suffering will be involved to get through this book. Overall, is it worth the effort? Yes, very much so: but it's a real shame what one reader did to muck up a fine book.

How the American Depression affected Photography.

Would you try another book written by Linda Gordon or narrated by Kathleen Gati?

Thats what the title should be as its as much about the country's struggle through the depression and the war as it is a biography about Dorothea Lange. It is a bit repetitive and at times its a struggle to read but it does cover the person and the times well. It has a lot of detail about Dorotea Lange I never knew and not being American, this gave me a good insight into the Depression and their war effort.

worth a listen. I learnt a lot about history as well as Lange. Performance could have been better but was OK once I got into it. some odd editing glitches.

A good story lost in the wash

The narrator really killed this one for me, at times she sounded like a wasp in a jar, ruining what is a fascinating life story and a lot of the background behind Lange's photos in particular the best years with the FSA.

Very interesting but narration was unusual

I enjoyed this book quite a bit, as I am a photographer and have admired Lange's work without knowing anything about her. The story introduced quite a bit of conjecture and assumption along the way, but in general the story seemed well researched. There were obviously more gaps in documentation than is common when putting together a book like this. Things that seemed obvious conjecture were well considered and generally had the ring of truth that keeps them from being speed bumps.

I wish I had read this book rather then listened to it. The narrator mispronounced quite a few words along the way, enough to be jarring each time. And they weren't just uncommon place names like San Joaquin (as San JoeWokin) but numerous common words.

I always assumed they would edit while recording to fix gaffes like these when producing audio books.

Many Books in One

This is a very long and detailed book that is more about the world during Dorthea Lange's time than it is about Lange. With this said, it is eye opening, and provides some incredible insight into American History. I felt as though I received three books for the price of one. I am grateful to the writer for all the research as well as the narrator for the reading. Books of this magnitude, are not easy to read. Yes, there are mistakes in the narration, but this was not easy ground to cover. To sum everything up, if you like to hear the untold story of America's history during the depression as told through a photographer's life don't hesitate read this book.

What disappointed you about Dorothea Lange?

The narrator's voice and reading (mispronunciations, nasal, whiny) quality made this grating to hear.

i couldn't listen to it. I am a great fan of Lange, but this is a disservice.

Who would you have cast as narrator instead of Kathleen Gati?

Rosenblatt or someone who can read orally.

Im returning this. Too painful to listen to and I'll have to buy it in hardback.

Great listen! Well written and writer talks all sides of story accounting for everything

An incredible story of one of America’s most iconic photographers

I learned so much about who Dorothea Lange was in this amazing biography. Like many people, Lange’s photograph, “Migrant Mother,” was my first introduction to Lange’s work. I do not remember when I first saw a copy, most-likely in one of my history books. In college I learned that she and friend and fellow photographer Imogen Cunningham were regular fixtures around San Francisco, where I grew up and live today. It made Lange’s story even more intimate to me knowing exactly where she lived, worked, and vacationed.

This is a well-written and well-narrated story of Lange’s life from her childhood through her death. The biography is textured and well-rounded not only exploring Lange’s psychology and physical limitations due to polio, but her ideas about her work and challenges, activism, struggles, love and relationships, family, but also an intellectual analysis of her work. I really feel like I got a really good understanding about Lange as a person, professional, and iconic photographer.

I also found it relaxing to listen to while driving and cooking. The narrator’s voice is soothing, calm, and meditative.

I highly recommend this audiobook.

What a Life, What a Woman

Beyond the story of one person, Dorothea’s life was a portrait of an era. Her determined lens gave voice to the oppressed at a crucial time in the history of America. It is impossible to study the history of the United States without considering her depression era photographs, not to mention her Japanese internment documentary work. Working against impossible odds, she prevailed against sexism and disability to create a new style of documentary photography. This book not only pays tribute to her accomplishments, but reveals the woman behind the photos. The result is a fascinating portrait.

As others have mentioned, the narrator was very distracting. Her tone is monotonous with no emotion. It's almost like listening to a text-to-speech computer generated reading, from the 1990s. Not to mention so many mispronunciations.

No characters, it's nonfiction.

The narrator is semi illiterate, that's the only way I can describe her. She basically can't pronounce most of the "hard" words in the text. At first I started counting how many words she mispronounced, then it just got to be so ridiculous it was almost laughable.

The book itself isn't bad, but the author admits that there isn't as much documentation of Lange's life as one would like, so there is a lot of historical background that is not specific to Lange's life.