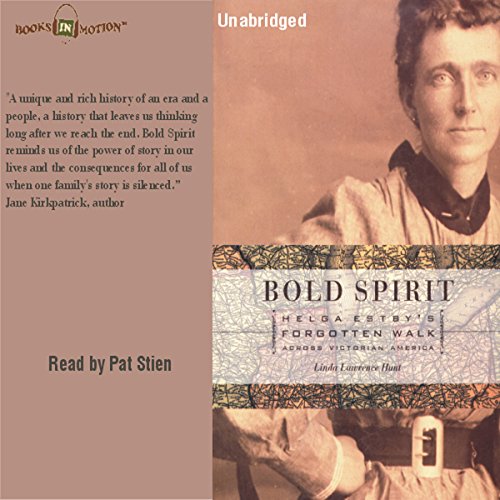 By: Linda Lawrence Hunt
Narrated by: Pat Stien
Try for £0.00

In 1896, a Norwegian immigrant and mother of eight children named Helga Estby was behind on taxes and the mortgage when she learned that a mysterious sponsor would pay $10,000 to a woman who walked across America.

Hoping to win the wager and save her family's farm, Helga and her teenaged daughter Clara, armed with little more than a compass, red-pepper spray, a revolver, and Clara's curling iron, set out on foot from Eastern Washington.

Their route would pass through 14 states, but they were not allowed to carry more than five dollars each. As they visited Indian reservations, Western boomtowns, remote ranches, and local civic leaders, they confronted snowstorms, hunger, thieves, and mountain lions with equal aplomb.

Their treacherous and inspirational journey to New York challenged contemporary notions of femininity and captured the public's imagination. But their trip had such devastating consequences that the Estby women's achievement was blanketed in silence until, nearly a century later, when Linda Lawrence Hunt encountered their extraordinary story.

"Surprising, inspiring....Hunt skillfully brings this story alive." ( The Seattle Times)
"A thoughtful discussion of the social and psychological factors that often silence family stories....Fortunately [Hunt] has broken the silence of Helga's story to embolden the spirits of future generations." ( Bloomsbury Review)

What listeners say about Bold Spirit

Where does Bold Spirit rank among all the audiobooks you’ve listened to so far?

This is one of the most interesting non-fiction books I've read/listened to, an amazing journey, in distance and accomplishment. It would have been so exciting following their progress in the newspapers at the time, but hearing it all this time later is still a thrill, I was left hanging on every word wanting to know what happened next.
The place of women is really highlighted in this story, so much has changed and it is often taken for granted. Helga and Clara Estby are strong and important women in history and it's great to hear their tale after it was nearly lost in time.

Where does Bold Spirit rank among all the audiobooks you’ve listened to so far?

I was intrigued by the synopsis. It was outside my usual comfort zone as I am more interested in Victorian Fiction. However I am always curious to know what it was like being a girl or a woman in these times, both in the UK and America, and so I took a leap of faith and downloaded. The Reviews were, afterall, rather flattering. I am so pleased that I did. There are so many levels to this "story." Why Helga's Walk across America became such a closely guarded secret, both within the Family and also beyond, doesn't become clear until the very end of the book. It came as a real shock to me. I was in tears. The last few chapters have a resonance which speaks volumes about the position of women in Victorian Times who dare to break conventions and try and take their Destiny in their hands in a hostile and dangerous environment. The Economic Troubles affecting America during this time sounds so familiar. History really does repeat itself. However it is how Helga responded to the economic troubles of her time was unique and also very brave. One Mystery still remains. I won't mention it as it might be seen as a spoiler. All I will say is that I wish I knew who this person was. Surely someone must know. I have my suspicions. I am also still very angry. Bravo Helga! I know her 19 year old daughter,Clara, also participated in this epic journey but this book is from Helga's viewpoint and also the consequences she faced when she returned home. I intend to read a book about Clara's account, albeit second hand, as I am sure it will be just as compelling a read

Helga, of course. How can you not like this woman? However I still feel alot of sadness when I think of her and her ultimate fate.

I liked Pat Stein's voice. She spoke with a strength and truth that was very apt. I hope to listen to more Audiobooks read by Pat Stein. I liked her American accent as it was subtle and she was very clearly spoken. She also spoke slowly but with feeling and also depth.

Oh yes! The last few chapters did make me cry. I felt overwhelmed by a deep sense of sadness. As if Helga was a distance blood relative and I had just heard from another family member the story about Helga's journey and also her life. The Journey itself left me feeling awe struck. Helga was indeed a Bold Spirit. A Brave Spirit. An Inspiration. A true Pioneer for women in Victorian America.

I had never heard of the 1896 American Presidential Candidate William Jennings Bryan until I listened to this book. I was intrigued by his campaign and the substance of his message. Again, what he said is being said by many today. Especially in relation to the 1% and the struggles of the remaining 99%. Helga also liked Bryan. Even if she could not vote for him. The Silver question is also being debated again today. Interesting

My mother, who is 104, is first generation Norwegian which was why I read this. This story is truly remarkable, considering all the challenges Helga faced before and after her amazing journey. I will recommend this book to all my friends - it portrays her bold spirit that can only inspire anyone that reads this to reach for anything that seems impossible!

I was so looking forward to hearing about the exciting, colorful adventure of Helga and Clara's trek across the United States, but it was a complete disappointment. What an opportunity to learn about ordinary Americans and how they lived their lives, what they had opinions about, how they felt emotionally, etc at the end of the century. I don't know whose fault it was: whether it was Helga's limited ability to write about her experience or the person who may have helped her write about them, but there was not the excitement I expected it to be. The narrator didn't help: her voice was flat, emotionless. I was appalled by the lack of generosity of Americans to help them get back to their home as quickly as possible. In summary I'm sorry I wasted my time to listen to this sad tale.

What an amazing woman and story! Has encouraged me to tell my kids and grandkids the stories of their great grandparents!

This book is an incredible story about a woman who walked across the USA in the 1800s with only her teenage daughter as a companion. They had no money; they carried no extra clothes or food; they found themselves accosted by men and followed by mountain lions. These women are the types of women I revere. They were strong, capable women breaking - no, shattering - barriers. I loved the story. However, the writing style feels more like a history report done in high school or at community college. It was difficult to get over the writing style and stay invested in the book. I stayed with it because I was intrigued by Helga and Clara. I still am.

Would you consider the audio edition of Bold Spirit to be better than the print version?

Haven't read it so can't compare the two versions

I was annoyed / disappointed in the reaction the family had. She should have been celebrated, not shamed for trying to save her family in the only way she could.