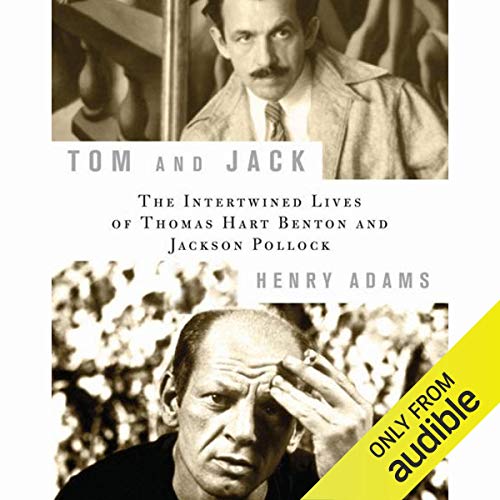 By: Henry Adams
Narrated by: Wayne Thompson
Try for £0.00

The drip paintings of Jackson Pollock, trailblazing Abstract Expressionist, appear to be the polar opposite of Thomas Hart Benton's highly figurative Americana. Yet the two men had a close and highly charged relationship dating from Pollock's days as a student under Benton. Pollock's first and only formal training came from Benton, and the older man soon became a surrogate father to Pollock. In true Oedipal fashion, Pollock even fell in love with Benton's wife. Pollock later broke away from his mentor artistically, rocketing to superstardom with his stunning drip compositions. But he never lost touch with Benton or his ideas - in fact, his breakthrough abstractions reveal a strong debt to Benton's teachings. In an epic story that ranges from the cafés and salons of Gertrude Stein's Paris to the highways of the American West, Henry Adams, acclaimed author of Eakins Revealed, unfolds a poignant personal drama that provides new insights into two of the greatest artists of the 20th century.

What listeners say about Tom and Jack

Not Worth the Read

I most liked the story of Jackson Pollock's painting, "Mural," which the narrator pronounced, "Miro." It was a fascinating, mythical story. I wish there had been more stories about his individual paintings.

Has Tom and Jack turned you off from other books in this genre?

I will continue to read books within the arts genre. But not from this author.

The narrator was almost as boring as the book itself. He rarely changed inflection or pace and did not invent different voices for each character.

Do you think Tom and Jack needs a follow-up book? Why or why not?

The author was attempting to make an original contribution to the field of art history by expanding the relationship between Jackson Pollock and his mentor. However, the book should never have been published. It would work better as a research paper than an actual story. It over promised in terms of story and under-delivered in terms of value or entertainment.

The author is a terrible story-teller. Pollock lived a fascinating life, but the author was so focused on establishing his "original connection" between Pollock and Benton that it lost all of its flair.

I suggest you READ, not listen...

I've had to stop after eight hours because I can't stand any more mispronunciations by narrator. If an actor has a contract to read a book, I would expect that s/he would look up any words s/he isn't 100% sure about. There are a lot of European names in this book, especially French. I almost stopped when "bois" became "boze" but when Piet Mondrian's was pronounced "Pye-ette", I threw in the towel. I even called a Dutch friend to check (his name is Piet) and he was in stitches at my question. This is a very good book that deserves a professional reader. Sorry, Mr. Adams that your book wasn't treated better.

Exceptional book and a very comprehensive audible for anyone interested in modern art and artists!

Started listening on a tuesday...finished listening to the end on Thursday. Well worth the time ...especially if you are interested in the art players of the 20th century.

Will put you to sleep

Performance if this book was so awful I had to stop. The reader definitely ruined the experience. If I could get a refund I would. Then, I’d buy the book and read it myself. That is what I would recommend to anyone.