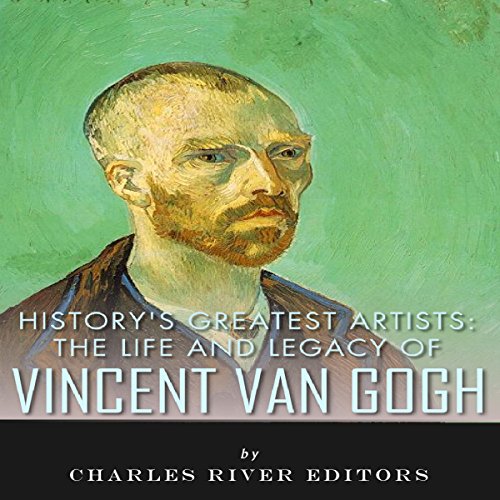 By: Charles River Editors
Narrated by: Jannie Meisberger
Try for £0.00

"A weaver who has to direct and to interweave a great many little threads has no time to philosophize about it, but rather he is so absorbed in his work that he doesn't think, but acts, and he feels how things must go more than he can explain it." (Vincent van Gogh, 1883)

Vincent van Gogh is undoubtedly one of the most famous artists of all time, and though the critical establishment may not consider him the greatest artist who ever lived, there may be no artist with whom the public has a greater familiarity. Unfortunately, a great deal of that familiarity comes from the circumstances leading up to his death, and the manner in which they have been linked to his painting career.

Of all the things that occurred in van Gogh's tumultuous life and career, the best known thing about him might be that he cut off the lower left lobe of his ear. Much of the general public is familiar with his painting Self Portrait with Bandaged Ear. In 1882, Vincent would hauntingly and somewhat prophetically write to his brother Theo, "What am I in the eyes of most people - a nonentity, an eccentric, or an unpleasant person - somebody who has no position in society and will never have; in short, the lowest of the low. All right, then - even if that were absolutely true, then I should one day like to show by my work what such an eccentric, such a nobody, has in his heart."

What listeners say about History's Greatest Artists: The Life and Legacy of Vincent van Gogh

Wonderful introduction to the life of van Gogh

Listened to this book with my 9 year old, and even though at times she found it hard to stay interested and follow the story line, we both really enjoyed it. It provided a concise and captivating over view of the artists life and was a wonderful way to introduce my daughter to his work and provide some context to visiting the van Gogh museum in Amsterdam.

The Live of the First Modern Artist

A thoroughly enjoyable look at the life of Vincent Van Gogh. Learn what shaped the life and art of this tortured genius. Very well presented and narrated. I would recommend this biography to any student of art history.
#Biography #ArtHistory #VanGogh #tagsgiving #Sweepstakes