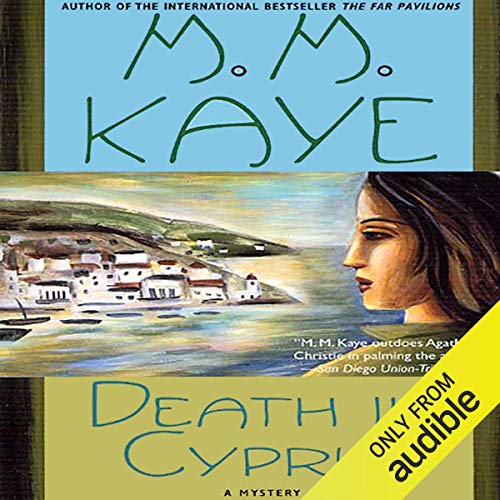 Twenty-year-old Amanda Derrington is on an extended cruise with her uncle when she decides to make a short trip to the sun-washed island of Cyprus. But even before the ship arrives in the port, there is a suspicious death. Once the passengers reach the island, it soon becomes clear that the death was in fact an act of murder. What Amanda had meant to be a pleasant excursion quickly takes a turn for the worse in this classic novel of suspense and romance by one of our most celebrated writers.

What listeners say about Death in Cyprus

I have always loved this story and read it several times. I was delighted when I found it on Audible and immediately purchased it but what a disappointment.

In an audio version the voice of the narrator is crucial to setting the scene and characters.
I searched all the libraries to find old versions of M M Kaye's Death in… stories read by Virginia McKenna who has the classic British BBC voice this wonderful classic story needs. Julia Farhal is definitely the wrong choice. She talks too slowly and emphasises nearly all the words and sounds American trying to do a Brit accent and is so irritating it is spoiling the story. I'm not sure I can even finish listening to it.

Re issue the Virginia McKenna narrated versions or at least choose another real English actress like Jan Francis with a light BBC accent.

Was Death in Cyprus worth the listening time?

I found the narrators accent too grating to finish listening to one of my favourite stories.

Find and reissue the McKenna narrations. It would be well worth while. I will not buy any of the others in this series by other voices.

Where does Death in Cyprus rank among all the audiobooks you’ve listened to so far?

Very high. If you have lived in Cyprus and know Kyrania

Have you listened to any of Julia Farhat’s other performances? How does this one compare?

Would have liked the story to continue even in a follow up book,I would have bought if posible.

What a great summer read. I love a book that takes me away to an exotic location and another time. What makes this book great is how well it is written. It is romantic and suspenseful without being cheesy. This book is well narrated. The voice fits the book. Audible has several other M.M. Kaye novels available but sadly the narration choices are poor on several of them. It's a real disappointment. The wrong choice of narrator really ruins a book for me. So if you enjoy this book and want to try another in the "death" series, I recommend listening to the sample first.

I loved every character in this story. The old lady who wore the eccentric clothing might be my fave.

Have you listened to any of Julia Farhat’s other performances before? How does this one compare?

No. She has a beautiful voice. I like hearing her read. It's too bad she didn't read all of them.

There were a few parts that made me snicker a bit. It was just a fun read. M M Kaye has the ability to take you to all those exotic locales and make you feel as if you are there, and to a period in time that seems better than ours somehow. I will read anything she's written. These mysteries represent her wonderful writing without a huge investment of 700 pages or so.

I Just Love The Oldies!

MM Kaye wrote a few mysteries in the 1950's that took place in exotic places. She chose the isle of Cyprus for this one.

Amanda Derrington is the ward of her Uncle Oswain, a businessman who still holds to Victorian traditions about women. So for her to take a trip from Egypt to Cyprus on a boat by herself is something of a symbol of her age and independence. Unfortunately as they are crossing the Mediterranean, a murder occurs, one that possibly was intended to be her instead of the actual victim.

When she arrives, she learns that things are not as she had expected. For one thing, she is unable to stay with the Bartons--people associated with her Uncle's business, who would have been safe and approved of by him, because Mrs. Barton has left her husband. So she is offered a place in the home of the eccentric Miss Moon (who, for instance, can only wear certain color dresses on particular days.) but of course, neither intrigue nor murder stop there, and the book involves deciding who is the guilty one.

I guess it's just my taste, but I so love the vintage murder stories. Some books these days seem to be competing for more violence and grisly details. In the "olden days," it was more like a complex cerebral puzzle for the reader to solve. And that's what I enjoyed about this book. I thought there might have been more effort on the author's part to give a better sense of Cyprus, itself. Another of her books, "Death In Kenya," definitely had more of a scary atmosphere and greater detail about the country. Still, this is otherwise very good, sort of in the Agatha C. tradition. I basically liked the narration. Julia Farhat did a good job. If you enjoy the old mysteries, you'll probably like this one.

Kaye's mysteries are delightful reads, and some of them are also decent audiobooks, but not this one. In fact, I think it is by far the worst read of the bunch. You could not pay me to listen to anything else read by this voice.

I love this book, but the narrator was so bad it was distracting. She has a school girl sing-songy delivery. Every sentence that was not actual dialogue was read the same way, with the same cadence, and much of the dialogue was too. Also, having lived in Cyprus myself, I know that she mispronounced many of the place names, which lack of research seems like pure laziness on the part of the people who made this.

trying to read everything she wrote. I love that it said "she said an unprintable word". Those were the days.

love the series; this one is problematic

I originally read this series many years ago and have fond memories of it. They were originally written in the 1950's. She was an army wife and lived in many locales, some of which are the exotic backdrops for her mystery series. The formula for the stories are thus; there is a young woman protagonist who is in the vicinity of a murder, there is a dashing older (but not too old) man who takes a fancy to her and by the end the murder is solved and he is ready to marry her. There really isn't much you would call a romance; it's more like a flirtation that turns into marriage. This is why these stories tend to be categorized as YA, though not originally written as YA. DIC; this is one of the weakest entries in the series, and it is not helped by the truly annoying narration by Julia Farhat. Her American accent in particular, as well as others are overly dramatic, even hammy. Unfortunately this one comes off as very dated. Today's sensibilities make the racism, sexism, and fat-shaming very tiresome. The protagonist is also naive to the point of stupidity. I am not a fan of characters who do incredibly stupid things in order to move plot along. The mystery part is well done. There are always hints if you can spot them, but they are not easy to spot. It's not awful; it's just that MMK can do better.

Best: MM Kaye does a good job of setting a scene. I could imagine myself there.
Least: Perhaps if the narrator were different, I would like the main character more. The narrator made Amanda, a 21-year-old, just sound so prissy.

Having read The Far Pavilions many years ago, I looked forward to listening to Death in Cyprus. I think it would have been much better had I actually read the print version. I did not like Amanda as read by the narrator.

The reader was over dramatic and affected. I did listen to all of it but won't repeat M M Kaye

Now I know why I've never read this author before

No. I kept thinking it would improve and didn't have another new book on hand. The lack of descriptive prose, given this was Cyprus, was unbelievable.

That it was set in Cyrpus. The characters, except for the southern american and the eccentric old woman, were boring and predictable.

Could you see Death in Cyprus being made into a movie or a TV series? Who should the stars be?

Given that I never watch tV because it is so banal, juvenile and boring, then yes. This would probably do nicely.