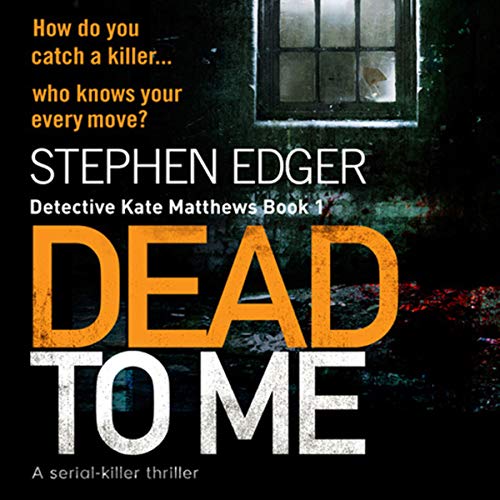 By: Stephen Edger
Narrated by: Emma Newman
Try for £0.00

How do you catch a killer who knows your every move?

She drew the curtains and returned to the kitchen where she removed the bottle of vodka from the freezer and reached for the large kitchen knife. If he dared to come back, she'd be ready for him.

When a body is found hanging in the remains of a dock-side warehouse, detective Kate Matthews is called to the scene. Recently transferred following the death of a colleague, Kate is yet to see a successful prosecution over the line. But this won't be an easy win....

Someone is watching her: leaving her clues in her home, taunting her to throw the case and threatening the life of her little girl.

As more bodies begin to surface and Kate's stalker closes in, her instincts tell her that there is a link hidden among the victims' missing pieces. This is a killer with a message and Kate must race against the clock to solve his twisted riddle.

But at the end of this impossible puzzle lies an impossible choice....

A dark and compulsive cat-and-mouse thriller that will keep you guessing to the very end. Perfect for fans of Angela Marsons, Sarah Hilary, and Patricia Gibney.

What listeners say about Dead to Me

Not my favourite listen

Usually I enjoy books that stretch my imagination, books that most people declare too far fetched to fully enjoy but this one is a step too far.
.
Kate acquires a stalker not far into the book who threatens her daughter so the first thing Kate does is LEAVE THE FLAT leaving the threatened child sleeping alone. The stalker later breaks into her flat, not once but several times, still Kate refuses to report this or seek protection for her daughter.

Once we hit the final run, we find out who the real killer is, now I don't want to post spoilers but the killer is the most improbable candidate considering all the physical activity that has surrounded his crimes! I wasn't surprised though, I was beyond surprise by this point, I felt only relief that it was all going to be over soon. Although the Saw theme music kept bouncing around in my head whilst the bad guy made his dreadful speech. The literal end was even more stupid, he wanted a last cigarette but did not have time as the police would certainly soon be arriving, but he was very definitely in a position to have that last smoke given what his next move was going to be.

I do not like Emma Newman's narration either, she speaks too slowly but this may suit some people.

Overall, Kate is the most irritating person and a dreadful Detective, all of the characters in this book, with the exception of Chloe and the childminder, are obnoxious people, maybe it's a Southampton thing, or maybe it has something to do with them all being petty minded, unprofessional idiots. Now, we all have different opinions of the British police force but I'm sure they can't possibly be that blundering or petty in reality (even in Southampton).

I did not like this book BUT others seem to like it well enough so go ahead, try it for yourself and see what you think.

not a great listen

the story was over complicated and lacked any satisfactory resolution. I found the narrator really poor, her accents were generic and didnt have the expression they could have, for example she made strong female characters sound weak and whiny. I thought the story had potential but didn't reach it.

I’m returning this one. Couldn’t get beyond first 20 minutes. Didn’t like the narrator, thought the way the “Soup” was portrayed was unbelievable and thought the main character was wet. Sorry.

Love this series of books

Wow .. 3 books and I have really got to know the characters in these fab books , written by Stephen Edger .. This book started a little slow , but by a quarter of the way through it , I was hooked .. I have now listened to all three books in the Detective Kate Matthews thriller series .., but was a little upset to see the last one had been written a year of two ago , so I contacted Stephen and he very kindly responded back to me , saying sadly there will only be the 3 books .

For any fans of Angela Marsons Kim Stone , Kim Wilkinson Jessica Daniels and Carla Kovach D I Gina Harte , you will love this series

I would so love the publisher to change their minds and let Stephen write more books in this series .. Very highly recommend

Could not get passed the narrator-

The Narrator sounds as if she is reading a book to 5 year olds!
Sorry but cannot listen further as her voice is driving me quietly insane.

It took a while to take off but raised its pace too a brilliant and great twisted end another great author!!!

Not terrible but not great either

I found the main character annoying. Her decisions were stupid and selfish. I find it hard to believe a mum would run out of the house after receiving a threat on your child and 'forget' to check on her until ages later! Obviously written by a man as women wouldn't react like this.

The storyline had potential but it was overscripted. Dreadful stulted narration making listening an effort.

What did you like most about Dead to Me?

Trying to figure out 'who dunnit' i love books tht keep me guessing....and with this one i thought i was being so clever and guessed but how wrong i was

What was one of the most memorable moments of Dead to Me?

It was all memerable proper page turner

What does Emma Newman bring to the story that you wouldn’t experience if you had only read the book?

I am a big fan of Emma's narration, she is clear and expressive she brings the characters to life in all the audiobooks she reads.

Catch me if you can.

I am looking forward to reading more in this deceive series.

The main character Kate was whiny! Storyline dragged on and was very boring. Would not recommend reading another book by this author. The good part was the narrator.

Stephen Edger has written a book that is a good start to a new series. The characters were well developed. There were plenty of twists to keep me listening. I recommend this book to fans of British thrillers.

It was ok.I hoped for more excitement. I finished it anyway. Narrator was great. Easy listening