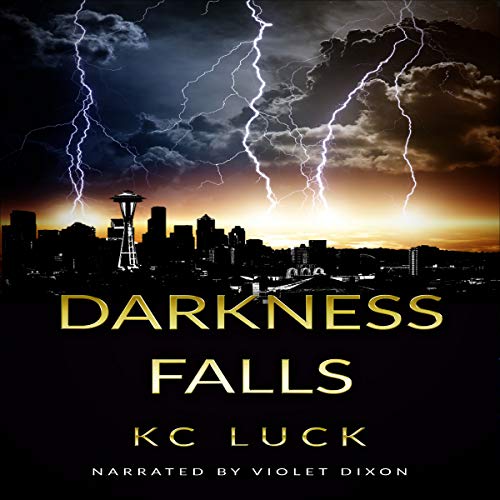 If the lights go out forever, can love survive?

When four women from different walks of life are brought together by fate to witness the end of the world as they know it, each must find a way to survive against the odds as well as learn to rely on each other.

Jackie Scott wields incredible influence as a magazine executive in Seattle. As she plans a smashing party for her 40th birthday, everything is precisely as she wants it. But when a solar storm lights up the night sky in a dazzling display, it not only ruins the party, but destroys power around the planet, and Jackie must turn for help from the one woman she has tried so hard not to want: Taylor.

Taylor Barnes is an Army veteran new to Seattle and wants nothing more than to find some peace and quiet working as a rent-a-cop in a corporate high-rise. When she is asked to attend the birthday party of the building's powerful and sexy CEO, she can hardly say no. Little did she realize every skill she ever learned would be put to the test to save the woman she can't seem to stop thinking about: Jackie.

Anna Patten is a nurse practitioner who has returned one last time to the town she ran away from to pack up the house where she grew up. Trying to avoid any drama, she cannot get away fast enough, or so she tells herself while her heart wonders about her high school crush. When fate lands them together in Seattle at a birthday party, suddenly, Anna must lean on the woman she once left behind: Lexi.

Lexi Scott has built a simple life of writing novels and remodeling her farmhouse, but when she runs into a long-lost friend, her world is turned upside down. It's not until she attends her sister Jackie's birthday party that she is forced to not only face the apocalypse, but now she must decide if she is willing to risk her heart again to save the only woman she ever loved: Anna.

The end of the world is only the beginning.

If you like a story with romance and adventure, mixed with conflict and heroism, then you will love KC Luck’s pause-resisting new audiobook. Explore the world of Darkness Falls today!

Note: This is a full-length, stand-alone novel with a science fiction/end-of-the-world theme, but it is significantly more focused on strong female characters in a loving lesbian relationship.

What listeners say about Darkness Falls

This audiobook was not on my „need to hear “ list - but the rest of the series is on it for sure!!
It’s an awesome story with great character development! With slow burn romance, adventure, angst, end time mood and some steamy scenes!
I love especially Taylor (swoon) because I really like Butch / femme romance and Taylor is an Army Veteran, a bit of a hero in this Chaos and is totally in Lust ( maybe) also in Love with Jackie…their story continuous in the second book „Darkness Remains“ I’m now listening to right now.
But also the other characters, like Lexi and Anna, are really nice and have such great chemistry right from the start!
Definitely highly recommended!

What a great listen ,after listening to this book went straight ahead and bought the rest of the trilogy.great story great narration 5stars all the way

Extremely cringe and uncomfortable to listen to due to poor writing and bad lesbian tropes. I shall continue my search for a good dystopian novel with lesbian characters that isn't focused entirely on sex and relationships...

Exactly what it says on the tin...

A touch of erotica, romance, action and a little eye rolling. Worth a listen

Finally a realistic-ish love story about the beginning of the end of the world as we know it. As a fellow lgbt Prepper this book really hit home for me. The balance between the budding romances and the next to non-stop action kept me on the edge of my seat to the point that I was shocked and instantly craving more when it ended. Seriously, I wish that it had a few more chapters and hope that the author releases a sequel soon.

A good LGBT+ story that goes beyond romance.

This was a story first. It's hard to find a good LGBT+ story that GOES BEYOND ROMANCE. This one did and it was refreshing.

The characters could have been straight, but we're lesbians instead. As a lesbian, I was looking for that. Just as black actors can play parts other than those based on slavery (why did that take so long?), "the gays" can do more then just fall in love.

STORY:
This story was realistic, believable, adventurous and perfectly paced. Oh, and it was HOT too, just say'en ;-)

NARRATION:
The narrator is great; actually I loved her. Usually, I rate the narrator on their diversity of character voices. While I could easily tell who was who (mostly contributed to the author), the narrator's skill was in her delivery of emotions. It sounded like she enjoyed reading it, thus, I enjoyed hearing it. There was REAL emotion there. I heard joy, panic, passion, fear etc in her voice.

5 stars because it delivered. It was true to it's description and worth every minute. It's not an earth shattering drama or exhausting action/thriller. It was an adventurous, fictional story in the LGBT+ genre. Well done.

I was really enjoying this story until....

I’ll try to avoid spoilers while still making my point.

Darkness Falls started out as an EXCELLENT story, well presented, with brilliant characterization and crisp dialog, compelling action and a believable plot. I was enjoying the hell out of it right up to the moment when the author had the lead character do something so stupid, so dangerous and so utterly out of character...

Specifically, this character (who has up to this point been the most rational, strongest-willed character of the lot, responsible in large part for their survival to date) casually blabs about specifics of her plans to a person who has already proven hostile to her ultimate goal, and then toddles off to bed leaving a crucial piece of her gear unprotected. Surprise, surprise, this hostile person disables the gear, ruining the main characters’ chance to get ahead of the looming disaster!

At that point I was so disgusted that I lost it. I turned the recording off and have not been able to go back to it.

I understand an author’s need to create drama, tension and conflict, but those are things which must arise organically, as a natural result of the story’s flow. Here the conflict is forced onto the story in a manner utterly incongruent with earlier events and the characters’ personalities and behaviors. It ruined an otherwise enjoyable Audible experience for me, and makes me distrust this author. I may give her another chance at some point, but I don’t know that she’ll ever be able to recover from what she did in Darkness Falls.

Good story, good narration. This was part post apoc, part romance. Both were well done. Will be reading the next book to find out what happens. (And, let's be honest, to get to the HEA :P ).

Well written and and plenty of action loved it. Hoping book two is in the works for audible to release.

This book is thin on plot, very repetitive. The characters have little depth and whine too much. Their actions are either mythical or classic stereotypes. What little plot there is, is entirely predictable.

I will say the sex scenes are extremely descriptive and border on pornographic. So, if you want a nice adult bedtime story you will enjoy those scenes. Everything else seems to be filler.

The narration is why off and detracts from the story.

What an awesome story, lots of action, and very descriptive. I like when an author pulls me into the story and I can visualize the scenes so clearly. Loved the characters too. Violet Dixon did an awesome job too. I highly recommend 👍🏼

One of the most annoying aspects that needs editing is the use of 'the woman' or 'that woman' in place of she or her or simply the name of character. The narrator is overly dramatic and somehow not the right voice for an explicit romance as she sounds like an inebriated spinster librarian or a giddy kindergarten teacher. The plot and characters are interesting enough, but the emotional dramas are tiresome. And the 'romantic' interludes are hasty and clumsy and would play better with less graphic detail and less creepy narration.

An exciting and dramatic story!

I loved the story of the possibility of this actually occurring. But then...it would be scary at the same time. What makes this really good is its not like other stories out...it's completely new and differant! And not to give much away this is not your typical romance. Settle in a comfy chair and read about a possible new world with new friends and lovers.

Heavy on your feels, not adventure

If you’re into highly dramatic/emotional characters, want to hear all about their feelings, and don’t need a lot of believable action, this book may be for you. Perhaps surviving through the pandemic and then snowpocalypse 2021 in the South are too recent for me, but I had a difficult time believing that the world would fall apart so quickly due to the event in the book. I also felt that the lesbians were being even more stereotypically dramatic than seems reasonable. Then again, this is a drama. Maybe I was expecting too much from the “”end of the world” description. There just wasn’t enough believable action/suspense for me. I do think that if you’re looking more for romance, this book would work for you. It may have been a bad choice on my part.

Edit: I just read the book description again, and realized I should have paid attention to the end when it says that it deals more with lesbian relationships. Again, probably a great book if that’s what you’re looking for!