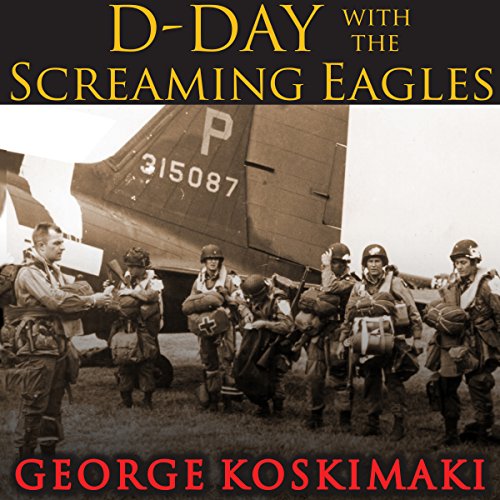 D-Day with the Screaming Eagles

By: George Koskimaki
Narrated by: Sean Runnette
Try for £0.00

In the predawn darkness of D-Day, an elite fighting force struck the first blows against Hitler's Fortress Europe. Braving a hail of enemy gunfire and mortars, bold invaders from the sky descended into the hedgerow country and swarmed the meadows of Normandy. Some would live, some would die, but all would fight with the guts and determination that made them the most famous US Army division in World War II: the 101st Airborne "Screaming Eagles".

George Koskimaki was part of the 101st Airborne's daring parachute landing into occupied France that day. Now, drawing on more than 500 firsthand accounts, Koskimaki re-creates those critical hours in all their ferocity and terror. Told by those who ultimately prevailed - ordinary Americans who faced an extraordinary challenge - D-Day with the Screaming Eagles is the real history of that climactic struggle beyond the beachhead.

What listeners say about D-Day with the Screaming Eagles

This book kept me up nights listening...a tremendous piece of work, very well read by the narrator, it gives you a fly on the wall perspective of the subject.
If this subject matter, being on the ground with the valiant men, interests you, look no further than this incredible book..

That informative and entertaining you will want to play it over and over. GO EAGLES.

No. The book really needed much tighter editing, especially for audio. Without any maps, it is very hard to keep track of what is going on where (much like the problem the paras had that first night and day). IT jumps so much from one person's story to the next that it is very jumbling. I finally gave up and returned it about 1/4 through. In some ways it is great to hear the personal accounts of all these men, but it does not make for an interesting audio book since the narrator's voice never changes whether in a firefight or eating rations.This could be a good nightstand hard copy book, as you could easily read a few or dozen pages, follow that on a map, then pick it up later. There are just too many short experiences for an audiobook this long.

Would you be willing to try another one of Sean Runnette’s performances?

Could you see D-Day with the Screaming Eagles being made into a movie or a TV series? Who should the stars be?

Actually it could be an interesting film or TV series like "Band of Brothers" which it actually is. Lt. Winters pops up several times in early events.

A better audio production and perhaps a companion file of maps could make this much more interesting. The narrator really needs to put more "moment by moment" life-death tension and excitement in the words.

The book so unblevable fantastic is all I can say! It makes you feel like you are jumping with the troopers of each stick.

Very in depth and personal

loved how the stories make you feel like you are tight in the action! I highly recommend.

A day to never forget in History.

My great grandfather faught in WWII and to hear this story makes me think about him. I loved it and reccommend it to others who want to listen about a day that the world wont forget.