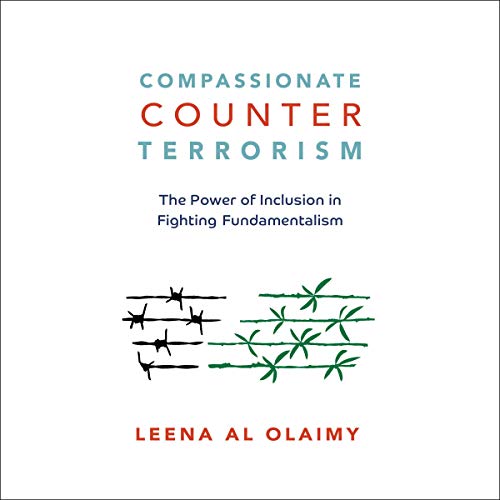 The Power of Inclusion in Fighting Fundamentalism
By: Leena Al Olaimy
Narrated by: Ana Clements
Length: 7 hrs and 36 mins
Categories: Non-fiction, Politics
5 out of 5 stars 5.0 (1 rating)

From purchasing pay-per-view pornography to smoking pot, many so-called Muslim terrorists prove by their actions that they aren’t motivated by devotion to religion, Leena Al Olaimy argues. So why do they really turn to violence, and what does that tell us about the most effective way to combat terrorism?

Al Olaimy sets the stage by providing a quick, thoughtful grounding in the birth of Islam in a barbaric Game of Thrones-like seventh-century Arabia, the evolution of fundamentalist thought, and the political failures of the postcolonial period. She reveals that terrorists are motivated by economic exclusion, lack of opportunity, social marginalization, and political discrimination. This is why using force to counter terrorism is ineffective - it exacerbates the symptoms without treating the cause. Moreover, data shows that military interventions led to the demise of only 12 percent of religious terrorist groups.

Combining compelling data with anecdotal evidence, Al Olaimy sheds light on unorthodox and counterintuitive strategies to address social woes that groups like ISIS exploit. For example, she describes how Indonesia, the world’s most populous Muslim country, has decreased terrorism while paradoxically becoming more overtly religious. Or how Mechelen, the city with Belgium’s largest Muslim population, adopted integration policies so effective that not one of its 20,000 Muslims left to join ISIS. Using religion, neuroscience, farming, and even love, this book offers many inspiring examples and - for once - an optimistic outlook on how we can not just fight but prevent terrorism.

Undoubtedly one of the best works on counter terrorism. simple and easy to understand. Difficult to put aside.

As a student of international relations, this is a good book for an introduction to counter-terrorism. Especially in the US, there is a perception of what terrorism is and how it should be dealt with. This book breaks down the causes of and reasons behind terrorism, and addresses the ways in which it is currently being dealt with, and offers better solutions. Highly recommend this book to anyone with an interest or wandering curiosity of terrorism and counter-terrorism.

Most insightful and well researched. Leena is in a league of her own, leading Arab women who will be on the forefront of peace building in the Middle East and globally!