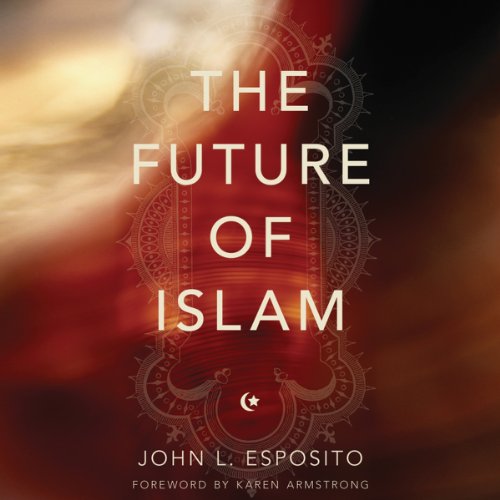 The Future of Islam

John L. Esposito is one of America's leading authorities on Islam. Now, in this brilliant portrait of Islam today - and tomorrow - he draws on a lifetime of thought and research to sweep away the negative stereotypes and provide an accurate, richly nuanced, and revelatory account of the fastest-growing religion in the world.

Here Esposito explores the major questions and issues that face Islam in the 21st century and how that will deeply affect global politics. Are Islam and the West locked in a deadly clash of civilizations? Is Islam compatible with democracy and human rights? Will religious fundamentalism block the development of modern societies in the Islamic world? Will Islam overwhelm the Western societies in which so many Muslim immigrants now reside? Will Europe become Eurabia or will the Muslims assimilate? Which Muslim thinkers will be most influential in the years to come? To answer this last question he introduces the listener to a new generation of Muslim thinkers - Tariq Ramadan, Timothy Winter, Mustafa Ceric, Amina Wadud, and others - a diverse collection of Muslim men and women, both the "Martin Luthers" and the "Billy Grahams" of Islam. We meet religious leaders who condemn suicide bombing and who see the killing of unarmed men, women, and children as "worse than murder", who preach toleration and pluralism, who advocate for women's rights. The book often underscores the unexpected similarities between the Islamic world and the West and at times turns the mirror on the US, revealing how we appear to Muslims, all to highlight the crucial point that there is nothing exceptional about the Muslim faith.

Recent decades have brought extraordinary changes in the Muslim world, and in addressing all of these issues, Esposito paints a complex picture of Islam in all its diversity - a picture of urgent importance as we face the challenges of the coming century.

What listeners say about The Future of Islam

Evidence and research based

What made the experience of listening to The Future of Islam  the most enjoyable?

I highly recommend the book

An overview of Islamic perception in the West

I found myself nodding to many points this book makes regarding the misconceptions about Islam that non-Muslims have. While some points can be questioned and could have been presented more clearly, in my opinion, it is a remarkable effort and Professor John Esposito did an admirable job.

This book should be required reading for high-schoolers in every Western country! If everyone took on board what Dr Esposito is saying we would put a swift end to Islamophobia

This book revealed to me how ignorant I have been towards certain parts of Islam and opened my eyes to the incredible amount of misinformation that is so greatly spread about the topic.

the author was the Catholic monk that converted to Islam but does not reveal that until towards the end of the book. the book is interesting because it deals with the future of Islam and the author tries to say that it is very compatible with democracy and Western ideals. He does provide some ideas that are contradictory to his main point however.

Sorry, I found it antisemetic and he uses statistics to justify the issues of the ideology. Glosses over the facts and ignores the issues of Islam. I know most Muslims are not extremist but he ignores the fact that over and over again people, smart and successful turn to the extremist version. The quotes of antisemetic Muslims is not balanced with positive statements. I found the book often offensive. Clearly John drinks the Muslims koolaid without addressing the broader problems. Instead he compares how moronic many people are with statistics showing the hypocrisy of the west without addressing Islamic history. Stupid people in any country don't justify violence by any group. John never addresses the
issues.