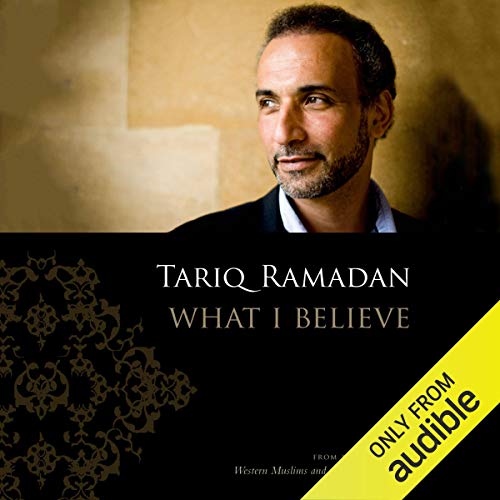 By: Tariq Ramadan
Narrated by: Mark Boyett
Try for £0.00

Tariq Ramadan is very much a public figure, named one of Time magazine's most important innovators of the 21st century. He is among the leading Islamic thinkers in the West, with a large following around the world. But he has also been a lightning rod for controversy. Indeed, in 2004, Ramadan was prevented from entering the U.S. by the Bush administration and despite two appeals, supported by organizations like the American Academy of Religion and the ACLU, he was barred from the country until spring of 2010, when Secretary of State Hillary Clinton finally lifted the ban.

In What I Believe, Ramadan attempts to set the record straight, laying out the basic ideas he stands for in clear and accessible prose. He describes the book as a work of clarification, directed at ordinary citizens, politicians, journalists, and others who are curious (or skeptical) about his positions. Aware that that he is dealing with emotional issues, Ramadan tries to get past the barriers of prejudice and misunderstanding to speak directly, from the heart, to his Muslim and non-Muslim readers alike. In particular, he calls on Western Muslims to escape the mental, social, cultural, and religious ghettos they have created for themselves and become full partners in the democratic societies in which they live. At the same time, he calls for the rest of us to recognize our Muslim neighbors as citizens with rights and responsibilities the same as ours. His vision is of a future in which a shared and confident pluralism becomes a reality at last.

What listeners say about What I Believe

Exactly what is needed in the west/ US in modern times.
Pragmatic
Realistic
Futuristic
Well thought out reformer.

I thoroughly enjoyed this audiobook. The author shows careful consideration to Islam and the rationale behind Western fears concerning Islam.

To me he is an excellent debater that exhibits philosophical soundness over many of his explanations.

Tariq Ramadan is aninteresting person to follow. A very intelligent human being.

Tariq Ramadan offers both a philosophical and a practical approach to integrating, and accepting the integration of, Islam in western societies. He does an excellent job of articulating the cultural, economic, and religious issues that are faced, and offers intellectual long term solutions to these problems.

The narration was done well. However, I needed to listen to some of the heavier concepts more than once as the narration tended to be very fast-paced.

This was very irrelavent to me as it focused on western view points and problems which I cannot relate. My ratings cannot be taken seriously.