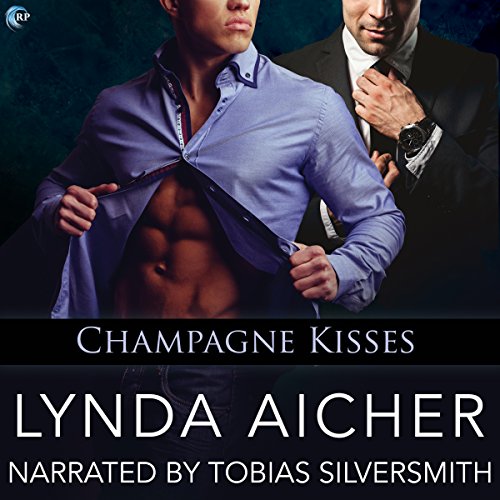 The Christmas Eve wedding Evan Cleary pulled together in four weeks is crashing down around him and taking his fledgling event planning business with it. With an empty altar and over a hundred guests arriving soon, he turns to the resistant, gorgeous brother of the runaway groom for help.

When Richard Patterson's flamboyant brother storms out hours before he's scheduled to marry his equally dramatic partner, Richard is left dealing with the fallout. The last thing he wants is more drama, yet he can't deny his attraction to the effeminate event planner trying to salvage the wedding.

Evan thinks his crush on Richard is a lost cause, but one steaming kiss later, he learns different. What starts as a night of hot sex turns into a connection neither expected. But Evan knows their relationship is hopeless unless the ultra-conservative Richard can embrace every part of him - both in private and in public.

What listeners say about Champagne Kisses

Where does Champagne Kisses rank among all the audiobooks you’ve listened to so far?

Since I've loved the majority of the Audio's I've listened to, that's a hard question to answer. It's worth a listen and I'll definitely listen to it again every year around the Holidays.

What was one of the most memorable moments of Champagne Kisses?

The intimacy when these two come together. I enjoyed reading it last year when I read the e-book, but there was something about the way Silversmith told the story that added an extra layer to it.

Have you listened to any of Tobias Silversmith’s other performances before? How does this one compare?

I have not, sorry. But I'll listen to him again for sure.

Again, the intimacy. This is a super short story so the moments come and go quickly. But I absolutely loved the way the intimacy was conveyed both in the written and audio versions.

Evan Cleary has worked hard to start his own business as an Event Planner, scrimping and saving to build the business from the ground up. Now he fears it will take two jilted grooms about five minutes to tear it down. Evan thinks fast and with the assistance of one grooms grumpy brother and check writing momma, Evan pulls off a fantastic Christmas party in place of the wedding and impresses everyone in the room. Including Mr. Grumpy.

Richard Patterson labels Evan as flamboyant and femme from the start and puts a lid on his attraction to the cute Wedding Planner. Alcohol, atmosphere and an adorably frustrated Evan causes Richard to re-think that decision. The two share a heated kiss, but then Richard opens his big, fat mouth which riles Evan's fur. Thankfully, Richard is a pretty smart guy, he makes Evan an offer that is hard to refuse. One night, no strings, just sex.

Short and sexy... this was just a fast, funny read. The chemistry between Evan and Richard wasn't evident at first, it took a few pages to get a feel for them overall. I thought Richards aversion to flamboyant, femme men then falling hard for one was a nice twist. Evan aggravated me toward the end though, the way he tried to blow Richard off, I didn't think it fit in the story the way it had been written up to that point. Overall, this was a good read and I'd recommend it to anyone that likes fast reads with some substance and an electric connection between the two leads.

Two days of enemies to lovers over the Holidays

This is a short and sweet, heavy on the physical stuff, holiday story about enemies falling in love.

Evan is ultra femme/swishy and Richard is an uptick prig. Richard’s brother Nate is also very swishy and that’s enough “color” in Richard’s life. Richard despises drama and in his mind the femme = the drama.

Evan is the wedding planner for Nate’s wedding and when it falls to pieces at the last minute, he and Richard are thrown together picking up the pieces.

While Richard is manly and controlling and everything hot Evan desires, Evan knows Richard is a self-centered jerk and that even if he is gay, he’s not out of the closet – thus off limits.

Richard, meanwhile, finds Evan attractive but knows he can’t handle drama like that long term, so why bother.

The entire story takes place over about 48 hours, so there’s a bit of back fill in the beginning telling us about the enmity between Evan and Richard then drama and then – honestly – a LOT of physical stuff.

It’s a pretty sweet, fairly unrealistic 180 degree turn around (for both men) -but not impossible - love story that hits a lot of nice holiday points.

We are left with a pretty happy HEA/epilogue and our MCs do seem like they’d have what it takes to make it, despite this being a short story.

Tobias Silversmith does a great job with Nate and Evan and all the drama. He’s a little cartoonish in his choice of voicing for Richard, but it definitely fits the tone of this story. It’s hard to take much of this seriously when the characters and the sensual stuff are so OTT.

I enjoyed listening to this and found the time flew by and recommend to anyone in the mood for a really hot, somewhat sweet, holiday short story.

A quick holiday story with a happy ending

Unlike most short stories this story feels like a complete book with a nice happily ever after. No abrupt ending this story shows how trusting first impression can make you miss out on something special. A nice quick holiday read the performance was a bit hard to follow at times but didn’t distract from the overall story.

This book was alright.
The Gist of it is... Two men meeting... Hating Each other on sight... And then Falling into bed together..
The Bedroom Scenes were pretty hot, but listening to the audio version I just couldn't take this book seriously. lol. In my defense... I had a serious case of the Giggles while listening to this one. LMAO. The Narrator has the most flamboyant dramatic voice which is perfect for Evans character, but for me it totally didn't work for the more gruff and dominating Richard. I really just couldn't stop laughing at Evans antics and Tobias' narration for him. But again, it was probably me and not the Audiobook itself. It was good for a shorter book and do think everyone should give it a shot, you may or may not like it *shrug*

Okay for a short holiday romance

This book was just ok, I couldn't get into it, perhaps because the narrator had a bleak tone that didn't seem to match. Both the story and narration didn't capture my attention, so my mind kept wandering and I'd have to rewind and listen to parts over and over again. I didn't feel the connection and heat between the couple. But there were some good moments.

If you could sum up Champagne Kisses in three words, what would they be?

No one character jumped out. Other than the first scene, Evan and Richard's story is told in isolation. I liked both of them. They were opposites and had their issues, but learned to work through them to acceptance and more.

The lobby scene near the end when Richard surprises Evan. Yeah, loved seeing him stand pat.

If you could take any character from Champagne Kisses out to dinner, who would it be and why?

Richard's brother, Nathan. I would want to shake some sense into him. Haha!

The narration done by Tobias Silversmith was a good match for this story and I enjoyed the audio experience.

I received this book for free.