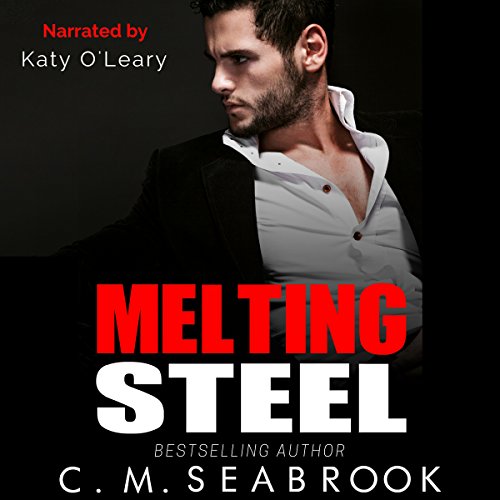 I know his type. Stuck up. Arrogant. The kind of guy who hasn't had to work for a damn thing his entire life. Even his name, Henry Caldwell III, reeks of privilege.

And me? Well, let's just say I come with more baggage than a 747 and enough bullshit to fuel it.

The problem is I want him. Crave him. It's the kind of pure, all-consuming, panty-soaking lust that can make a girl forget why she swore off men to begin with.

He thinks I need saving. But this isn't a Cinderella story, and he's no Prince Charming. At least not mine. I learned long ago that trusting any man with my heart isn't just dangerous - it can be deadly.

Emotionally crippled, smart-mouthed, and sexy as sin, the woman is nothing I need and everything I want.

Despite her hard edges, tattoos, and reckless spirit, I know she craves more. More from life, more from love, more from me.

She thinks I'm just a trust fund brat and maybe she's right. But I've got secrets of my own. I know what darkness is. I've lived it - faced the pit of hell and barely survived.

The question is, am I strong enough to face it again? Because if I'm ever going to break through the steel wall she's placed around her heart, it'll mean facing demons we both thought were long dead and buried.

What listeners say about Melting Steel

I enjoyed this book, but felt like the story was rushed. They met once as children and he helped her. When they met 20 years later he protected her again and was instantly in love with her. They didn’t communicate about their relationship as much as I would have liked. The narration was great with a couple of little technical issues. I recommend this book. 🎧 Audiobook Obsession

This story was pretty thrilling. The story was jam packed and the characters were fun. THe narration was done pretty well. I enjoyed listening and found the story interesting.

Such an action packed storyline

This is a non stop fast paced storyline. With good characters and an intriguing plot line it will keep you hooked. Good performance from Katy.
#audiobookobsessionreviewer

Oh to have a knight to keep me safe. I would love to bottle up Henry and share him with all my lady friends. Kellie has endured much and still finds her knight. Loved the storyline with all the emotions and suspenseful.
The only thing keeping me from giving 5 stars was the narrator not doing the male voices very well. Still it's worth the listen.

One to be enjoyed

Where does Melting Steel rank among all the audiobooks you’ve listened to so far?

It's one I will enjoy listening to again. The narrator really brings the story to life.

What was one of the most memorable moments of Melting Steel?

I loved when they met as children and Henry gave her his sword to use for protection.

Have you listened to any of Katy O'Leary’s other performances before? How does this one compare?

No. She was new to me. I am interested in listening to other books she narrates.

I have no idea. It would make a good movie.

The story is interesting and pulled me into the characters until I became lost in the story. The narrator enhanced the story. It is a romatic story of two who meet as children. One privileged, one definitely not. As adults, they find each other again. There are definitely some challenges, some not so happy moments, and some hot hot erotic times as they find their HEA. This book is well worth a credit even though I was gifted with a copy by the author. I freely provided my honest opinion of this very interesting story. It's one I will definitely enjoy re-listening to again and again.

Seabrook does it again!

Every time I listen to a CM Seabrook, I swear that hero is my favorite. Now I listen to this one and Henry is REALLY my favorite! Every woman wants a knight in shining armor and Keeley is lucky enough to meet hers when she is a child. What she doesn't know is this knight will come to slay her dragons when she most needs him. Henry is a swoonworthy, alpha male who is immediately taken with Keeley, his protectiveness kicks in from the minute he meets her. The two together are nothing short of scorching, but that is not the attraction in this book for me. The story that Seabrook has written has all the elements I love..a little danger, a lot of family history, secrets, greed...but most of all loyalty and true love. She will make you believe in overcoming obstacles and finding that happily ever after as your knight protects you.

Katy O'Leary does a wonderful performance for this book. This is my first listen of her narrations and I enjoyed her pacing and ability to voice the characters.

I have read several of CM Seabrook's book and they have all been so good. this one didn't disappoint. Everyone needs a knight in shining armour. the chemistry between Keely and Henry was so strong, yet Keely was afraid to give in to it...with good reason though. a broken girl and a broken boy coming together. ah i loved it!! the narrator did a good job!

I really enjoyed this story.

Would you listen to Melting Steel again? Why?

The narrator brings the story to life. Melting Steel was suspenseful, angst and steamy.

I loved Keeley and Henry they were perfect together, and their chemistry was so hot!

Every girl dreams of her white knight coming in and saving the day!

I received this audiobook free for an honest review as a member of the Pink Flamingo Production Review Team. This was an awesome listen. The author did a great job of bring the listener in and taking them on a wild ride. This was a quality story of suspense, thrill, romance and a real Cinderella story with a twist. Would have loved to hear a male/female narration, but Katy O'Leary did a great job with the characters.

I received this audiobook from @AudiobookObsession for an honest review. It is a short listen and I did enjoy the overall book. The narration wasn't awful but this story would have been a great duel narration. She did a great job but sometimes the story just needs that male voice. As for the story I think it has potential to be great. It does not end on a cliffhanger so no need to make into a series or needing more. It was just a short and simple read.

A knight slays her dragons

I've read/listened to several of CM Seabrook's books. I loved the prologue where Henry and Keeley had a very sweet meeting in their early childhood years, but under very heartbreaking circumstances. We learn that Henry's life was much better than Keeley's life and things are getting worse for her. I was heartbroken through much of this story. The end was a sweet HEA though.

Katy O'Leary was a good narrator. She has a
deeper voice and did well for both male and female characters. Her performance was well done.

I thoroughly enjoyed this book, it is well written with interesting storylines that are captivating from start to end. The characters are realistic and easy to connect with. I just adored Henry, the lead male and hero of this story, he has a heart of gold and sticks to his guns and/or sword when it comes to promises. Keeley, has not had the easiest life, her and her brother Drew grew up in foster care after her mother went off the rails and their father wanted nothing to do with them, She vowed to always look after her younger brother but it seems like he is going off the rails and got himself involved in some shady dealings with another supposed friend they were in foster care with. Henry happened to meet Keeley when she was a child and at that time he vowed to protect her from dragons. They meet years later, Henry is drawn to her, there was something about her, he comes to realization later on who she really is. The chemistry between them is electric and despite their difference upbringings they really click, though Keeley insecurities make her think otherwise. I loved how everything plays out in this book, the story is cleverly plotted with plenty of drama, angst, twists and turns, thrilling and suspenseful moments as well as heartfelt and emotional one and a hot romance. C.M Seabrook, thank you for another terrific story and emotional rollercoaster ride.

Katy O’Leary did a great job with the narration and bringing the characters to life. She is an entertaining storyteller and a pleasure to listen to. Thank you for the great listen🎧

When Kayley was 5, she was hiding in the woods, as she watched her mom beg a man for help. Henry, 8, was in the woods playing. He found Kayley crying. He told her he was a knight and would always protect her. He gave her his wooden sword, carved with his initials.
20 years later, he accidentally met Kayley but is she the same person he has been dreaming about? Can he get her to trust him? All he wants to do is take care of her as he promised. He wants to be her knight, fight off dragons and be her hero. this story has greed, a dirty secret, sex, love and learning to trust the one person that wants to help the most.
I enjoyed listening to the story narrated by Katy Oleary.
🎧audiobookobsessionreview🎧