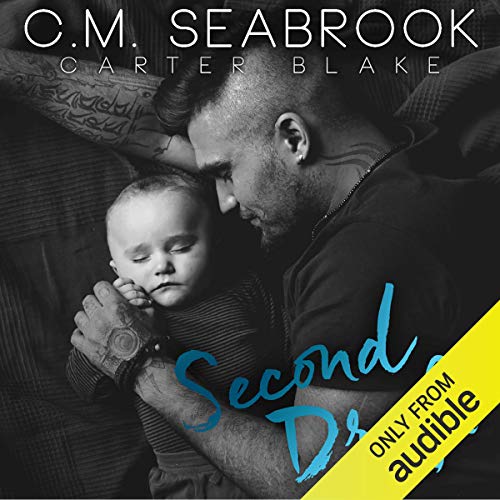 By: C.M. Seabrook,Carter Blake
Narrated by: Addison Spear
Try for £0.00

It's been almost a year since I've seen her, the only woman that's ever gotten under my skin, and made me wish I was a better man. More than just the washed up hockey player, turned sports journalist whose body is almost as scarred as his soul.

Layla Harper made me hope again. But life has a warped sense of humor, and I wasn't the only Bennett brother that fell for the girl with the caramel colored eyes.

The night I saw Travis with her I knew I'd lost, even before I had the chance to fight. Because one thing I never compete with my brother over is women. Even if the woman stole my breath, and my heart with one single kiss.

And damn, what a kiss it had been.

Now, she's pregnant with my brother's baby. A baby he wants nothing to do with. And he's asked me to clean up his mess.

What he doesn't know is that I'm in love with her, and I have no intention of offering her the deal he's laid out. I have a deal of my own. One that will finally make her mine.

What listeners say about Second Draft

My word. This story was so good. Highly entertaining, and so different. The author did a great job with the storyline and the characters were relatable. I enjoyed the dialogue, and the narration matched it well.
🎧🎧AudioBookObsessionReviewer🎧🎧

I have to admit that I was hesitant to read this book because of the description. A man who steps in on his brother's girlfriend? Eeek. But this story was so different than I thought it would be and I loved it. I loved the idea that Carter and Layla had basically a love at first sight kind of thing and then through a series of events weren't able to connect. Layla was Carter's brother Travis' roommate and one drunken night, slept with Travis (probably shouldn't have happened given her level of described drunkenness but Travis is a pretty bad person. I was not a fan). Regardless, Carter comes back into her life when Travis abandons her and I loved to see their relationship grow. There is a bit of angst towards the end but so emotionally well done. This was a short but really beautiful story.

Addison Spear did a great job with the narration. Great pacing, great infusion of emotion and overall, a well read story.

I struggled a bit writing this review because Second Draft is much more than the simple face value description - instant attraction/taboo relationship story without too much angst. It deals with some serious topics, and I wouldn't call it a sports romance. I would recommend it to contemporary romance fans. I'm interested in listening to more of the series.

Addison Spear was a new narrator for me. I prefer that dual first person POV books have dual narrators, but she did a really great job bringing the story to life with her performance. She did more than just read the words. Her pace is a little faster than other narrators (in a good way), so she's able to fit a lot of story into the shorter length audiobook.

was a good story once I got used to person talking and her accent.

This book didn't lose me at any point. I loved it, it ended better than I was expecting.

First, I love audio books but the narrator spoke way too fast for the first couple chapters, rushing through it was hard to keep up. She then slowed to a comfortable pace or I go used to it, either way, it was a great story.
Not your typical love at first sight romance, drama when needed, and perseverance through tough times and decisions. Very rewarding in the end.

This is a great series. This book is heart warming &quot;AUDIBLE 20 REVIEW SWEEPSTAKES ENTRY&quot;

Second chance romance will all the feels!

Omg this book. It brought out all the emotions. Once I started I couldn't put it down. Just when I thought I knew where the story was going...BAM!...another twist that kept me glued to the pages and anxious to find out what would actually happen.

The first time Layla, a shy, bookish girl tryin hard to work her way to a better life than the one she's running from, meets Carter, a former professional hockey star who's trying to adjust to life off the ice, is when he saves her life, but fails to get her name before parting ways. Their second encounter happens at a club and there he gives her his number. But because of an honest mistake it's the wrong number and Carter loses hope of ever seeing her again. A year passes and Carter finds Layla in the last place he can imagine: living as his brother's roommate in his home. This time around a year has changed everything for them and along with ghosts of Layla's past, it could keep them apart for good.

A fantastic story of second chances, fighting for love, and overcoming heartbreaking losses. I loved this book so much! Five well deserved stars and a bonus star to Carter for his awesome gift to Layla!

Addison Spear is a new narrator to me. I wasn't too sure I liked her male voice, but after a few chapters in I was sucked in to the story and fully enjoyed the audiobook. Overall she did great just wasn't the biggest fan of her male voice at first. By the end I was thoroughly enjoying it. Definitely looking forward to more of her narrations.

Loved this!! Lots of feels!

I really CM Seabrook's narrative! Fast paced, addictive and very sweet! I love her heroes - they are oozing so much alphaness!!

Quick enjoyable listen that is dual POV.
Overall I gave it 3 stars. I needed more character development for me to connect with the story. That’s not to say it was bad but I like stories with more substance. I like alpha males and Carter definitely was one so that was a plus! I feel like we barely scratched the surface on Carter and Layla. I would recommend if you like quick and steamy listens.

Narration was good but would have benefited from a male narrator as well.

The day he saved Layla from walking into traffic was the day Carter's world changed. He knew something was different about her. He didnt get her name or number. He thought he would never see her again. A chance encounter at a bar was kismet. He accidentally gave her his old phone number. When he realized it, Layla already disappeared. When he returned year later, to his surprise, Layla was his brother, Travis , roomie. At 21 , Travis was still an irresponsible, spoiled, wild and still dependent on his brother. Many complications, and another chance for Carter and Layla, but not without, complications and trouble from Travis.
Addison Spear narration was very good.
🎧audiobookobsessionreviewer🎧

This was the first book for me to read/listened to by Carter Blake and CM Seabrook. They are a good team. I enjoyed the book and even found myself crying a couple times. My heart just dropped. Really enjoyed the listen!!

Addison Spear did a great job. A few times O had trouble differentiating between voices, but overall I enjoyed her performance. She has a great voice for both male and female characters.

Good plot but rushed. I like to see a relationship that forms over respect, team work, and trust. It has these elements but sexual chemistry is at the forefront. Predictable but a good listen.

This was my first book by the author so I didn't know what to expect but I am always open for trying something new. Layla and Carter met one day and had a connection, but due to unforseen circumstances never reconnected until Carter found Layla again one day...living with his brother in a house he owned. This got even more complicated after that when Travis, Carter's brother, up and leaves when he decides having a baby with Layla is too much responsibility. HIs role in the story was complicated, maddening, and overall very sad.

Carter and Layla had great chemistry and a great connection. Carter made for a great hero in that he was willing to do anything to make things good for Layla and he seemed to really genuinely love her. Layla was a complicated character in that she had a difficulty past and upbringing, a very messy relationship with her parents and a fairly traumatic past in general.

I overall enjoyed the author's writing style and the story. There were some parts of the story that could cause triggers for some people given the nature of the subject matter. I was engaged in the story line and very happy that after all of the sadness in Layla's life she finally got her happily ever after.

This was my first listen by Addison Spear. It was a little fast in the beginning so I had to slow down the speed in order to be able to enjoy the book. I did feel like it took a little while for me to get into the narration aspect, but the story was intriguing so after a while I was fully engaged in all aspects of the book. #AudiobookObsessionReviewer

Second Draft is a second chance encounter with a obstacle in the middle of it. An audiobook with a peerless narative.

My favourite pieces of this romance were:
▪️I love that Layla is a reader, even in a bar, and an aspiring author
▪️I love the references to popular indie authors
▪️Dual pov which gives you all the right vibes
▪️No extra filters
▪️Epilogue dated in the future with

That being said, I have read other novels from C.M Seabrook and I absolutely loved them. However, I didn't fall in love with the characters or narrative. I'm not sure, but the narator had put a little damper on it.

Narator Addison Spear speaks way to fast, rushing through the narrative making it difficult to keep up. She does slow down a bit after the first few chapters making it easier to listen. Her articulation was good, but she needs to practice slowing down.