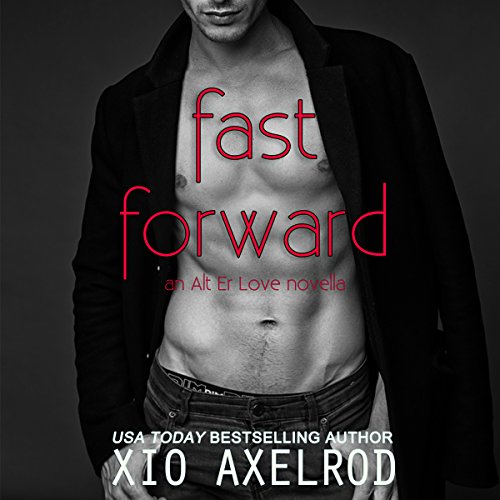 As a 19-year-old wunderkind doctoral candidate, Ian Waters had little interest in social interaction. Books were his companions, and that had suited him just fine. Then a hurricane named Jessen Sørensen blew into his life, throwing Ian off his axis.

On the cusp of rock stardom, Jessen had burned brightly, and Ian had fallen heart-first under his spell. But Ian soon learned he was only a temptation, a pit stop on the road to the rocker's dreams, and Jessen was gone as quickly as he'd come. Ian buried his heartache in academia, the only home he'd ever known.

When Ian encounters Jessen at a party, the seven-year separation seems insurmountable. There's too much pain, too much distrust. But Jessen declares he has a new dream, and that's a life with Ian.

What listeners say about Fast Forward

first i must say that im from Denmark. we understand Norwegian quite good. We might not speak it. But we know how it has to be said. And when bouth the auther can make a caractor say things in Norwegian and a narrator kan say it so you think he knows what he is doing. then he is doing a good job.
a Norwegian rockstar sexgod who is not afraid of his own sexuality. who can say no to that. Ian cant. And ofcourse he ends up with a broken heart. So broken that when Jessen comes back in his life 7 years later. He is still broken, and so afraid that he cant believe that Jessen wants him back.
my only problem with this book is that i really wished it was longer. I wanted more.
when i get a book from an auther for a review. I dont always read about it before. I like to get a Surprise. This book was of the good kind of Surprise. and i am so glad I Got a chance to review this. The auther is new to me. But this is not the last time I listen/ read her books. This was hot. And I love hot books.

What would have made Fast Forward better?

What does Tristan James bring to the story that you wouldn’t experience if you just read the book?

He saves the story from being silly. His voice and manner always makes one consider the words he reads. He's one of my favorites.

If you could play editor, what scene or scenes would you have cut from Fast Forward?

The last chapter should have been removed. Either alternate between the perspective and voice of main characters or leave it as a single person's voice. This just seemed tacked on.

This novella was very difficult for me to rate. The writing ranged between 3/5 to 5/5 stars consistently; however, the plot and dialogue were ridiculous. The story was almost as bad as the Mary Calmes story, You Never Know. (Don’t get me wrong. I adore Mary’s stories and own nearly 40 of her audiobooks.)

I fail to understand the appeal of a man who claims his undying love, then abandons you without a word (for years on end no less), and then when he's had his fill of fun, success, drugs, sex and general dissolution, comes running back with, “Oh, Baby. I’ve missed you so much!” Fuuuuuck that!

It happened to me only once. The person called me after 10 years to “get together.” I was polite and wished them a nice life. Please never contact me again—ever.

Ian and Jessen had a 7 year separation. Ian is determined to keep them separated but Jessen had quite a different plan drummed up. Ian and Jessen are so different. Ian is an academic and Jessen is a rock star, yet they are so perfect for each other.

Tristan James did Jessen's accent, so it was easy to distinguish which character was speaking but it was difficult to distinguish between the narrative and Ian's conversation, if that makes sense. But his voice is very pleasant and he is a great narrator.

I really liked this rock star romance. The lovey scenes were the best part, and I liked that the LI was from Norway. It was an escapism book, not realistic in the scene but still enjoyable. The narrator did a good job with the different accents though my only complaint with this second chance MM romance was that it wasn't IR. Since this author mainly does IR under this pen name, I assumed her MM books would be too.

This was such a fantastic short, my only complaint is that I wish it was longer because I loved every second of it! I have also started learning Norwegian and so Jessen from Norway was a lovely surprise. You can tell the author and narrator did a lot of research and put thought into the book because the Norwegian and the accent Tristan James uses is believable. I liked the heat between Jessen and Ian is unmistakable and fantastic to read- with Tristan’s silky voice that compliments it and makes you shiver!
this was a short book with amazing detail and I did not feel anything was left out of rushed, as other short stories tend to be. It is a new author for me and I am now anxious to read more of her work, her writing was great and very touching and sweet. It was also funny at times with Ian’s internal banter and freak-out moments. It was such a fantastic read I really want to listen to it again and again. I just felt like I was too falling in love, in all the flashbacks, and that is something I really adore in books- they make you feel with the characters.

My Thoughts on Fast Forward

This quick novella managed to pack so much story into so little time. I got to experience the fall, the crash, the heart break and the steps to mending that I look for in a romance story.

The two main characters had a whirlwind romance that swept them up before life and the pull of others tears them apart. I was completely caught up in it all.

This newest author and narrator both did a fantastic job and I look forward to experiencing more from them in future.

This was very enjoyable listen on a lazy afternoon. I liked the story but only wished it was longer. Would definitely read and listen to Xio and Tristan James again.

There's an innocence to Ian that is... precious... endearing... and the way he melts under Jessen's touch... so pure... breathtaking...

Perfectly narrated, I loved this short story. It focuses on emotional depth, not dependent on peripheral descriptions or supportive characters. I was disappointed only in when it ended.

wish the story was longer

deep and emotionally a strong fast read. the story didn't truly depict why Jesson left Ian. I feel that Ian forgave Jesson too easily. This was my first MM read, and also my first Xio Axelrod read, and I think she did a great job for a short story!!

Read the story and enjoyed it. Hearing the words out loud was even better. Wanted to hear what Jessen would sound like. Reader did good job

I may be a straight female, but I want a love like this! Jessen and Ian's love affair had been intense but ill-timed. Now seven years later, these two men are unable to forget the love that had quickly grabbed hold and fiercely hangs on. This second chance romance is the perfect amount of love, lust, broken hearts and mended souls. There are plenty of hot scenes, but there is also emotional depth. I loved it! While M/M romance may not be everyone's choice, a love story like Fast Forward deserves to be told. After all, "Love is everything."