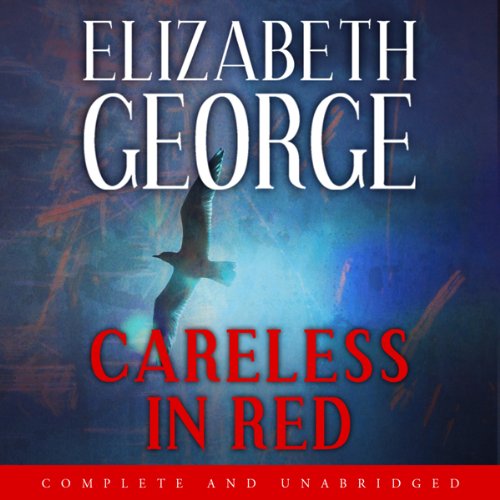 By: Elizabeth George
Narrated by: Crispin Redman
Try for £0.00

It is barely three months since the murder of his wife and Thomas Lynley takes to the South-West Coast Path in Cornwall, determined to walk its length in an attempt to distract himself from his loss. On the 43rd day of this walk, he sees a cliff climber fall to his death, apparently witnessed by a surfer in a nearby cove. Shortly afterwards, Lynley encounters a young woman from Bristol whose personal history is a blank before her 13th year. These events propel him into a case that brings Barbara Havers from London and thrusts both detectives into a world where revenge is only one of the motives they must sift through to identify a killer.

What listeners say about Careless in Red

the narrator is horrible

narrator ruins the story completely, it is a parody, ridiculous voices (especially the female ones)

Started to listen. Straight to chapter 11!! Not good enough Audible. I’m sure book would be fine if I could start at chapter 1!!!

George at her best...

What did you like most about Careless in Red?

What other book might you compare Careless in Red to, and why?

Not a particular one - enjoyed them all.

Not difficult to be utterly taken by Elizabeth George - she is one of the best crime novel writers ever. And I really appreciate the audio productions of her books hence would be delighted to find the earlier E. George novels (that I have all read) soon as audio books. I surely would buy them all!

Would you try another book from Elizabeth George and/or Crispin Redman?

At the moment no. But a yet I am have to finish the novel (as it does not have any needs to want to listen to it!!) !!

Has Careless in Red turned you off from other books in this genre?

No not at all!

Not much at all! Too over the top! uppertty!