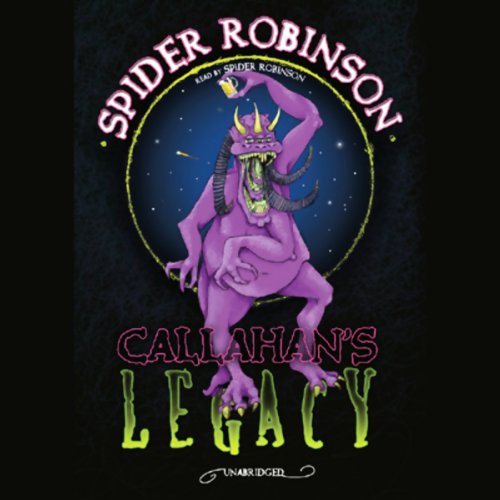 It's more than 20 years since Spider Robinson revealed the existence of Callahan's Crosstime Saloon, and the original bar is gone. Mike Callahan is gone, too, but his spirit lives on in the new bar, named Mary's Place for his daughter. On this particular day, nothing seems to be going right for Jake Stonebender, proprietor of Mary's Place. First a huge storm rips the roof off the bar, and moments later, drops another, better roof on it. Then, Mary Callahan and her husband show up, unconscious, literally out of nowhere, and they bring bad news to the barfolk: a nasty three-eyed, three-toed, three-everythinged purple monster is going to descend upon them within mere hours. Through laughter and tears, with puns powerful enough to melt Formica, the most famous bar in all spacetime is going to rock this night. But will the Earth survive?
©1996 Spider Robinson (P)2006 Blackstone Audiobooks
Science Fiction
Show More Show Less

"What Robinson's many fans look for above all is humor, wordplay, and a complicated web of allusions to favorite rock lyrics, classic SF stories and previous Callahan tales. They get plenty of each here and should feel right at home, again." ( Publishers Weekly)

What listeners say about Callahan's Legacy

I was really looking forward to spending another listening to these quirky and heartfelt characters but after bearing with it for 8 hours (which was a bit more then required) I gotta say feels like a different series.
The stories are a bit darker than before and are dealt with much more seriously. The sci-fi is cranked up a bit more but in a very odd way considering what’s come before.

This isn’t the same bar I walked into before.

Still relevant how many years on?

I had forgotten how much I enjoyed these books which an ex introduced to me. While I have a little time to read these days it’s been an absolute delight to revisit this series again through audible. Cannot reccomend this highly enough!

I so needed this fun adventure thanks for the journey . What a trip what a ride

Not as good as his first three books.

This latest book was not on a par with his previous work. Pretty much everything about the book seemed contrived rather than flowing naturally. It was also predictable. Which wouldn't bother me normally but the book wasn't good enough to be predictable and enjoyable. A dissapointment and the last one of his I'll try for a while.

OK but takes some getting used to Spider Reading

I like the story well enough but for me Spider Robinson is not experienced enough to read his books. The tempo of the reading was too rapid for me, though once I got accustom to the reading pace it was not awful. But I would definitely recommend this book to fans of the author. Well worth the credit.

Wit and wisdom of alcholics

If you spend your free time at bars, and think that there is nothing greater than the wit and wisdom of a bunch of disfunctional drunks, then this is the book for you.

Good but not SciFi

The Scifi runs very low but there are good points in there. The story happens every now and then but overall it is not a bad story. The author is very eager to display his skills of collecting puns and his knowledge and love for music of all forms.

Juvenile and a waste of time. Even a 10 year old could write a better story.

love to all things in the Callahan universe. Thanks to Spider for letting us into his world

When I first found Callahan's series here on Audible, I fell in love with the series like so many other fans out there. But unlike those that first read the stories in the pages of Analog, I heard them vocalized by Brett Whitener.

Now I don't know about you, but on the few things that annoys me more than anything about audiobooks is when for whatever reason they can't, don't, or won't keep the same talent from book to book.

So when I plugged the new Callahan book into my iPod and started listening I was shocked because it wasn't Brett Whitener. In my haste to grab and listen I just didn't look to see who read this title. The voice was pleasant and seemed to have an intimate knowledge of the work -- which always helps -- and so I decided to listen to the whole thing before passing judgement.

Little things started to stand out. Like the special emphasis placed on "THE MACHINE" or the way the reader paused before delivering the final blow of a particularly horrid pun.

As for the story, the science content was thick in places but not so thick that a sci-fi nut would need a PhD to understand. The characters are witty, finely tuned, and well up to the task of taking from the tragic sacriface of the original tavern through the events that destroyed Mary's Place.

It was in the final moments of the title when Spider himself is speaking the credits does he identify himself, and what a gestalt that was. The creator himself was for whom Brett Whitener stepped aside. Thank you Audible, and thank you Spider. It isn't often that an author can pull off the reading of their own title as you have.

If you enjoy Callahan's Crosstime Saloon, you'll enjoy this, but do yourself a favor and read the titles in cronological order. He's not kidding when he says it takes three books to explain the history of Mike Callahan and his former bar, lucky for us those three books are available in an omnibus edition here on Audible.

Although Barrett Whitener is excellent as narrator of the other books in this series, it was really enjoyable to hear the author narrate one of his own book. To hear some of the voices, songs, and puns as the originator had envisioned them added another dimension to all the books. Recommend the whole series: Callahan's Chronicle (1st three books), Callahan's Legacy (4th), Callahan's Keys (5th) and Callahan's Con (6th).

The Callahan series is about drinking. Since I don't drink, and kind of wish others wouldn't, either, I have curmudgeonly docked a star from my rating of this audiobook. But I have to admit the whole series does make me laugh. It gets a bit smarmy when it starts describing how all the tavern's patrons love each other so much that they can mind-meld, a la Vulcan. And why did we have to listen to a child-birth during the height of the adventure? I had to dock another star for that bit of gratuitous mush. Like I said: curmudgeonly. All the same, I would recommend the Callahan series to anyone who enjoys outlandish and funny science fiction. And Spider Robinson does an excellent job of reading his own book.