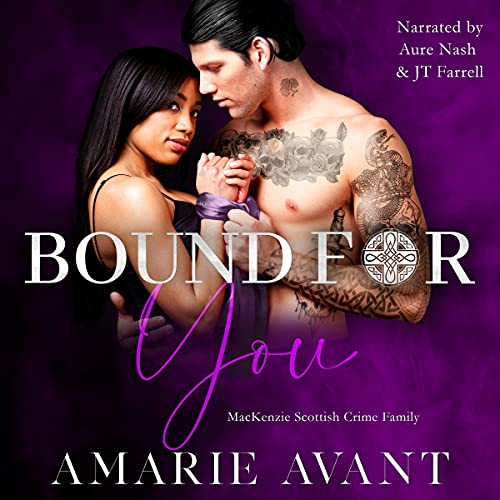 By: Amarie Avant
Narrated by: Aure Nash,JT Farrell
Try for £0.00

I was taken by the monster in my nightmares....

Broken hearts carry dark secrets, and I'm determined to put mine to rest.

On a cold night, when I attempt to take my life, I'm stolen away. Abducted by a man whose sins should've condemned him to hell. Who sets my heart on fire with fear and desire.

I don't need a happily ever after, or to be captivated by his intoxicating, ruthless ways. I'll run before I turn into the thing I swore I would die before becoming.... His.

Broken, little birds can't fly, and I'm determined to keep the one I found.

I've murdered more men than the plague, but the innocent Ava doesn't have the right to take her own life.

Her light's my salvation capable of washing away my sins.

I don't need anything else in this world but my little bird.

I'll make Ava realize she's bound to me. Forever.... Mine.

What listeners say about Bound for You

Looking forward hopefully to the next book loved all thus far. Mors please

Amarie completely smashed it yet again with these hot steamy twisted and totally compelling characters. Kieran and Ava had me on the edge, rooting for them from start to finish.

This book shines! I love how Kieran MacFarland rescued and brought his little bird back to the land of the living. And, how Ava took away his nightmare of self hate and gave him his heart back! I agree with you, this was your best book yet! I hope you do another part to this intertwined clan! Will poor Jamie ever find peace and his place in the world? Will Rory stop terrorizing Loch? Will Keira find herself wrapped up with a Mackenzie lad bent on his own destructive ways. Could she pull him back from the brink? I hope you iron them all out!

Amazing work from an amazing author!
Thank you!

“Happily bound to you for life”. Ahhh that was sweet. What a complicated relationship. Loved every bit. Especially the rolling emotions. I also enjoyed the family reunion! now that can be another book lol. When willow said “Do u need a therapist” rofl. The narrators also did a great job I loved their voices it was like honey.

This book was all over the place couldn’t enjoy

This book was NOT like the others. It’s one thing to fall for your kidnapper ….. it is another for love someone that is ok with killing you. I just couldn’t with this book I never believed the chemistry between the characters it was just forced not to mention abusive .

I am so glad that I decided to get the audio version of this book as well as the kindle version. Amarie, you did it again. This installment in the McKenzie family was great. I couldn't put the book down when I first read it and now hearing it just made it all come to life more. I felt for Ava and Kieren at times throughout the story. I loved how it wasn't your typical love story. Having the characters being broken and looking for a sense of belonging made the story feel realistic to me. Not everyone has the supposed"good life" and to find someone that truly accepts you no matter how messed up and tormented you life is, is just a wonderful thing. I won't spoil the book/audio for the next person, but I will simply say to read or listen to this story because it tugs a you and the sex scenes are delightful...😋😋

Bound to this story

Even though Kieran has a very dark side, I love his character! Ava is one lucky woman. Their meeting was hardly cute considering the circumstances but Kieran melts hearts right from the start.
Ava has suffered so much, she deserves this one of
a kind, one time love.
I was also very happy that the main villain gets his in the end.
Don’t know how Ms. Avant will follow this up and do better but I’ll wait to find out. ⭐️⭐️⭐️⭐️⭐️

I got all the feels with this love story

What a wonderful story about two broken people connected with each other and fell madly in love. The hero's accent was truly authentic and Perfection. It felt like I was a fly on the wall in a real clan, hearing the accent. I just loved Ava's inflection, emotion, everything that she brought to the narration. This really brings substance to the story. I was cheering and shouting thanks to her. I highly recommend the read you will be pleased and wanting to be Ava.❤

First and foremost, the voice actors were phenomenal. They bought the MCs to life and I enjoyed every second of it. Kieran and Ava’s story was HAWT, action-packed, and filled with drama. Those bedroom scenes had me fanning myself lol. Kieran is the definition of a true anti-hero. He can kidnap me anytime!

I really liked this book and would recommend it. It had a great storyline and sexual storylines. As always I wish this book was a movie or TV show.

This couple was crazy good for each other. I wish she had put her ex husband in a hot car in the desert like he did lil Erica.

The narrators were great even though JT had air in his recording. AA you are an awesome writer give us more of this series.

I just couldn’t stop listening to this book!!! I kept rewinding it just so I could listen to it over and over! It has a great story line and character development. Please be sure to listen to this series in order so you can understand the family dynamics. PLEASE keep this series going, I BEG of you!!!!!

I have read all of the MacKenzie Crime Family books. Ready for the next one.